We have selected the highlights from Globe’s analysis of Mexico’s  attempts to address climate change.

Mexico was the standout country in 2012 on climate change.

It passed a comprehensive climate change law – The General Law on Climate Change – with the support of all major political parties, a real achievement in a usually partisan Congress.

In parallel, Congress approved legislation to prepare for the implementation of so-called REDD (Reduced Emissions from Deforestation and Forest Degradation).

This progressive stance is indicative of Mexico’s positive approach to tackling climate change.

In 2005, Mexico successfully lobbied to become part of the “+5” group of countries to participate in the UK’s G8 Summit outreach on climate change and subsequently hosted the 2006 meeting of the “Gleneagles Dialogue”, an informal forum on climate change involving the G8 and major emerging economies.

In the UN space, Mexico put forward proposals for a Green Fund, hosted the annual UN negotiations in Cancun in 2010 and, as a member of both the OECD and the developing country bloc, it has acted as a bridge between the rich and poor countries, helping to build trust.

The next challenge for Mexico, domestically, is to ensure the law works.

As Christiana Figueres said at the 1st GLOBE Climate Legislation Summit in London on 14 January, the priority for Mexico, and other countries with climate laws, is “implementation, implementation and implementation”.

The cross-party GLOBE Mexico group in the new Congress is committed to its scrutiny role and is working on an action plan that will help to ensure the government delivers on the commitments and targets in the law, including by scrutinising the national budget to ensure sufficient resources are allocated to facilitate delivery.

The experience of GLOBE Mexico on legislative scrutiny will be of great help to legislators from other countries as they develop and pass their own laws. 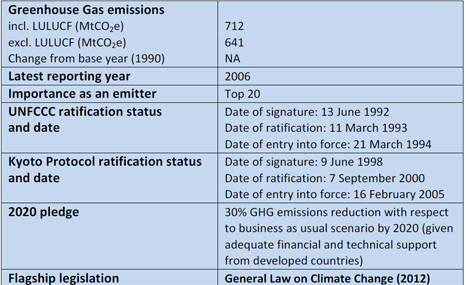 Political background
The GLCC was published in the Official Diary of the Federation on 6 June 2012 and became official law on that day.

This was a major advance in Mexico’s actions to tackle climate change. After a long process of negotiation that lasted two years, the key breakthrough was a meeting in October 2011, convened by GLOBE International and addressed by former UK Deputy Prime Minister, Lord Prescott.

At this meeting the legislators from different parties, who had proposed separate drafts of a climate change law, agreed to merge them into one single proposal.

The GLCC was voted on, and approved, in the Mexican Senate on 6 December 2011, coinciding with the UNFCCC COP17/CMP7 in Durban, South Africa.

The news was warmly welcomed as it showed how different political parties could come together to tackle climate change.

Forests and land use legislation
On 19 April 2012 the Mexican Congress passes a series of legal reforms on the Environmental Law (1988, last amended in 2010) and on the Sustainable Forest Development Law (2003), to facilitate the implementation of the REDD+ mechanism in Mexico.

Energy legislation
The Law for the Use of Renewable Energies and for the Finance of the Energy Transition (LAERFTE) and the Law for Sustainable Energy Use (LASE) were passed on the same date, on 28 October 2008. In September 2009 a fund for renewable energy was created at the initial value of MXN 3 billion.

In a similar vein, the Law of Bioenergy Promotion and Development was passed in late 2007 with the purpose of developing bioenergy in the country, thus contributing to energy diversification and sustainable development while supporting rural areas and promoting social inclusion.

Major climate laws
General Law on Climate Change/2012 – This establishes the basis for the creation of institutions, legal frameworks and financing to move towards a low carbon economy. As a General Law, it specifies the different responsibilities of the Federation, Mexico’s pledge under the Copenhagen Accord, in terms of committing the country to an emissions reduction target of 30% below Business As Usual (BAU) by 2020, subject to the availability of financial resources and technology transfer.

The GLCC also creates a climate change fund to channel public, private, national and international funding projects that simultaneously contribute to adaptation and mitigation actions, such as supporting state‐level actions, research and innovation projects, technological development and transfer, and the purchase of Certified Emissions Reductions (CERs).

Law for the Use of Renewable Energies and Funding the Energy Transition/2008 – Seeks to reduce Mexico’s dependence on hydrocarbons as the primary source of energy. Promotes and regulates the use of renewable energy sources and clean technology for electricity generation through the Special Programme for Renewable Energy Use.

Law for Bioenergy Promotion and Development/2007 – Ensures that the Inter‐sectoral Commission for Bioenergy Development promotes the production and commercialisation of bioenergy inputs from activities in rural areas related to agriculture and animal husbandry, forests, seaweed, biotechnology and enzymatic processes.

Inter‐secretariat Commission on Climate Change/2005 – This Commission’s aim is to promote and develop Clean Development Mechanism (CDM) projects in the public and private sectors.

Accelerated Depreciation for Investments with Environmental Benefits/2005 – The bill allows investors to deduct up to 100% of the investment in renewable energy projects from tax liability during the first year, in accordance with General Law for Ecological Equilibrium and Environmental Protection. Once the tax deduction is granted, the plant must remain active for at least 5 years.

RELATED VIDEO: Why Mexico must balance responsibility to nature with rapid economic development