For thirty days, residents of Suwon city in South Korea agreed to swap their cars for a eccentric collection of bicycles 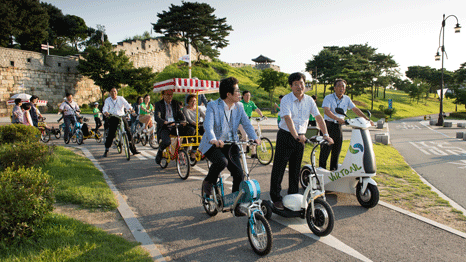 The traffic on Hwaseomun Street seems designed to strike fear into the heart of every commuter in the South Korean city of Suwon. Bottleneck traffic slow journeys to a snail’s pace, while illegally parked cars line the side of the road.

But those who ventured that way in September were greeted with a rather different sight. Instead of the usual mayhem, this once-busy street was filled with bicycles, scooters, tricycles, segways, velo-taxis, cargo-bikes – and not a single car.

As part of the EcoMobility World Festival, the residents of the Haenggung-dong neighbourhood in Suwon decided to adopt a car-free lifestyle for thirty days. During this period, roads were cordoned off, and the only vehicles allowed were those which did not consume fossil fuels.

“The EcoMobility World Festival will help visualize this future with a showcase neighbourhood demonstrating what a car-free, ecomobile future will look like; a mise-en-scène in a real city, by real citizens, in real time,” said Konrad Otto-Zimmermann, the Creative Director of the Festival.

During the month, the 4,300 residents of the district gave up their vehicles in favour of clean vehicles. The project was a joint experiment by the Suwon government, ICLEI-Local Governments for Sustainability and UN-HABITAT, who wanted to push the boundaries of what was possible for local sustainability by creating a car-free urban haven.

Free rental stations were set up across the city, and over 500 vehicles were distributed to business owners and households throughout the neighbourhood.

To prepare the city for its car-free reincarnation, €9 million euro (13 billion KRW) of public investment was used to spruce up the infrastructure, so that the vision for the city was accessible to all residents irrespective of age, gender or physical capability. This included planting more trees, widening footpaths and upgrading the sewage system. 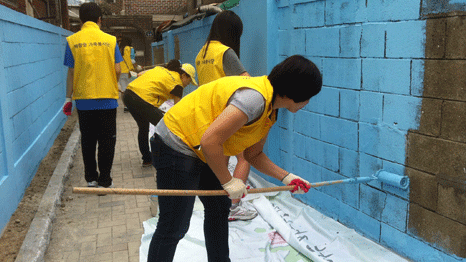 The city got an updated infrastructure and a fresh lick of paint before the Festival (Source: Go Kyeongah)

Suwon is the capital city of the province of Gyeonggi-do. It has pledged to reduce its carbon emissions 40% from 2005 levels by 2030. The city houses both the UNESCO site of the Hwaseong Fortress and the world Samsung Headquarters.

“Our city is attempting to improve the street facilities in a neighborhood that has always been lagging behind due to the development restrictions relating to the preservation of Hwaseong Fortress. Our aim is to create streets where modernity and tradition can coexist, “said Yeom, Tae-Young, Mayor of Suwon.

The experiment met with widespread approval from its residents, who found that the fresher air, low noise levels and safer travel beat the convenience of fossil-fuel travel.

“Like many residents, at first I could not imagine life without cars,” said Doo Chang Wuk, a retired government employee. But he added that, after the event, “There were plenty of residents who think they could get rid of their cars, but only doubt if their neighbours would be able to.”

“I went around the Festival area and realized that I want this. If this does not happen to my neighbourhood, I will move to Haenggung-dong!” exclaimed Kim Jeong Hyo, a resident of a surrounding neighbourhood.

The Festival was also an opportunity for businesses to showcase their vehicle inventions, who suddenly found they had a city of willing test drivers at their disposal. During the month, 39 manufacturers from eight countries, including the United States, Germany and Taiwan, provided human-powered and electric vehicles to make their maiden voyages.

The streets of Suwon would have be ample inspiration for anyone hoping to make a 21st century sequel to Chitty Chitty Bang Bang.

The line-up of vehicles included the Yikebike, the smallest foldable bike; Trimobile, a tricycle that can carry three people at a time but only requires one to pedal; Nordic Cab’s multipurpose bike trailer made out of eco-friendly aluminum and hardened plastic; and many more. 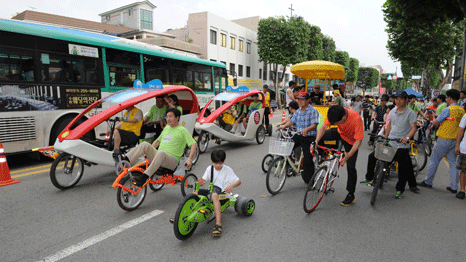 “The EcoMobility Festival will be exciting for all,” said Otto-Zimmermann.

“The Suwon citizens will demonstrate healthy and environmentally-friendly mobility; the EcoMobility industry can promote their vehicles and test innovative products; city decision makers and urban planners from all over the world will visit Suwon and gain an impression of ‘urban EcoMobility in action.’”

Now the cordons have been lifted and cars are back on the roads, but Suwon Mayor Yeom Tae-Young says that the city’s innovation in sustainable transport will continue.

He says: “Building on the Festival, Suwon will go one step further by introducing a tram system, establishing a transport system focused on public transportation, and promoting ecomobile lifestyles in Suwon. By doing so, children and the aged will be able to move around in a safer environment.

“The fact that the neighbourhood endured initial inconveniences and gladly took part in the Festival touched people‘s hearts and minds around the globe.”