In the RTCC Climate Leaders series, the winner of 1997 Nobel Peace Prize says tar sands are a major threat to human security 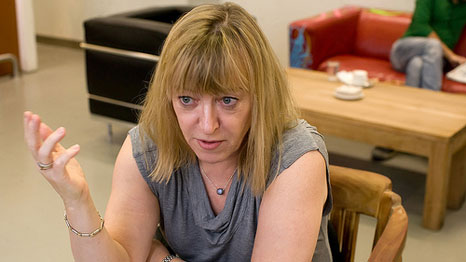 The story of the slowly eroding cultures of those on the frontline of climate change is often tucked away behind an Armageddon-like narrative of extreme weather and financial disaster.

But for Jody Williams, a 62-year-old Nobel peace prize winner from Vermont, the threat that climate change poses to the way of life of an individual is just as important as the vast changes it is already wreaking upon the environment.

As a long time human rights activist – she points out early on that she has been campaigning now for 32 years – her approach to the climate debate revolves around the chaos that it causes not only to the land itself, but also to those who live on it.

Her most recognised activism with the International Campaign to Ban Landmines, for which she won the Nobel Peace Prize in 1997, is one example of a deeply held “righteous indignation”, as she calls it, at all kinds of injustice.

She is passionate about demilitarization, and the interview, the latest in RTCC’s Climate Leaders’ series, swerves fluidly between discussions of Syria, to US funding of weapons, to climate change, all pieced together by their impact upon the rights of individuals.

Most recently, she has turned her attention to what many environmental activists consider to be their greatest nemesis: the exploitation of the tar sands in Canada.

The project poses similar risks as the Keystone XL Pipeline – a 2,000 mile long transportation system designed to take the bitumen mined from the tar sands of  Canada to refineries on the Gulf Coast of Texas – with the world waiting to see whether President Obama will approve its construction, a decision now said to be likely to happen in 2014.

There are many objections to the Pipeline.

The most widely cited is the highly polluting process of producing the oil, which is three times as greenhouse gas intensive as conventional gasoline.

It would increase US emissions by 30 million tons of carbon dioxide per year if it were to replace the crude oil currently being used by refineries. That is the equivalent of placing an extra 5.6 million cars on the roads.

But, for eight days in October, what Williams chose to focus on a rather less publicised problem associated with tar sands: the disruption to the lives and traditions of the indigenous First Nations people of Alberta. 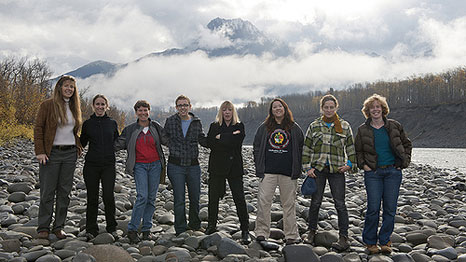 Last year, between the 8 and 16 October, Williams led a group to Fort McMurray, Alberta, where many of the companies responsible for the tar sands oil extraction are operating, and from then on towards Vancouver.

The aim of the tour was to draw attention to the quieter voices of the tar sands debate: the indigenous people, and particularly the women, who feel their lives and livelihoods are being threatened by the industry in the region.

“We met with indigenous women and non-aboriginal women all along the pipeline route, after we viewed the tar sands themselves – and they’re quite remarkable – and just talked with them about their feelings, their actions, and what steps are they taking,” says Williams.

“It was inspiring and sad and all the things that you can expect from listening to women tribal leaders speak about the devastation to tribal lands, the cancers and illnesses of their children as a result of tar sands exploitation, and the impact on the climate there, which is causing insect infestations of the forests and killing the trees.”

According to the government in Alberta, there are approximately 23,000 Aboriginal people living in Alberta’s oil sand areas, including 18 First Nation tribes, with thousands more living off reserve and off settlement.

“They don’t want to put up with it anymore.”

Many have claimed that there is a link between the increases in health problems in the region with the tar sands exploitation.

In a small lakeside village of For Chipewyan, for instance, more than 100 out of the 1,200 population have died from cancer. Studies have suggested that this is 43% higher than usual, and that some of the cancers are linked to contaminants.

The government claim that they are working closely with aboriginal people to ensure their land rights are protected and that the production of the tar sands does not pose any health threats to those living in the region.

But Alberta’s Chief Medical Officer and the Royal Society of Canada expert panel have claimed that there is insufficient evidence to link the incidents of rare cancer in Fort Chipewyan to oil sands operations.

Meanwhile, the government also says that they are ensuring that development is balanced “with a respect for Treaty Rights” though the First Nations Consultation Policy on Land Management and Resource Development, which has been reviewed with input from the First Nations, industry and municipalities. 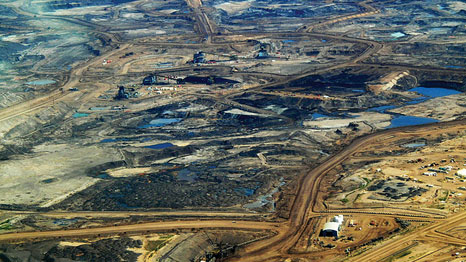 The government also claims that the industry is providing financial benefits to the region, with 1,700 Aboriginal people employed in permanent oil sands operations jobs in northeast Alberta in 2010.

But all this is doing is holding the native people in economic hostage to the industry, silencing them with the threat of losing their jobs.

There is no choice, claims Crystal Lameman, an activist from the Beaver Lake Cree tribe whom Williams spoke to on the tour: indigenous people must work for the industry or face abject poverty.

“Nobody wants to speak about it because they are scared. They say ‘carry our message but don’t use my name,’” she says. 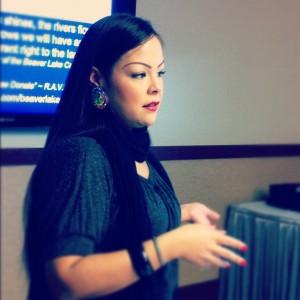 But, says Williams, the biggest takeaway for her from the tour was that the villagers are ready to fight. “They will do everything they can to not allow the pipeline to go through their country,” she says.

“They will tie themselves to the bulldozers; they will lie down in the pipe trenches. Some of the native indigenous women, they were very fierce about what they will do to stop the pipeline, and I think that is pretty awesome.

“It is totally remarkable and totally appalling that corporations just want to turn their back on it –‘Who cares? We fat cats are getting rich and we don’t care if a bunch of aboriginals have their whole life disrupted – we’ve been messing with them since time immemorial.’

“Of course, they don’t say it that way, but it’s the mentality of them and us. For the corporations and the one who can influence government power, they don’t care about the individuals.”

One tribe, the Beaver Lake Cree, are taking their protests one step further, and are taking the Government of Canada to court for over 17,000 treaty violations.

In 1876, the Cree ancestors signed Treaty 6, which guaranteed the right to hunt and fish. The tribe members are claiming that the oil industry is not only compromising this right, but is actively destroying the lands.

But, she says, while cultural heritage is at the heart of the First Nations’ fight against tar sands, it is not an argument that can be used quite so effectively elsewhere.

“Their argument is this is our land and culture – but that’s not an effective argument for people in Vermont, for example, or people in Ottawa or Montreal.

“But I think it takes all of those voices speaking out on the different aspects of the impact of climate change that makes a difference.”

Across regions that have a more advanced ability to cope with the financial devastation of extreme weather events when they do occur, it is the increasing frequency of freak events that are starting to make people take action, she says.

“My husband and I were in London in April, and when we got home to Virginia, we found a tornado had whipped through our town when we were gone, and knocked down our willow tree, knocked down our big fence, and tore a little bit of the roof off. We’ve never had a tornado here,” she recalls.

“So I think it’s harder and harder for people to ignore the unhappy fact of climate change, and I think more people are getting involved to take positive action to stop it.

“Climate change is affecting everybody around the planet sooner or later, and some of us sooner. How could you not care?

“Of course, no one will be around to record it, but I firmly believe that, and it’s one of the reasons that I am quite passionate about doing what I can to be part of the global movement to stop climate change.” 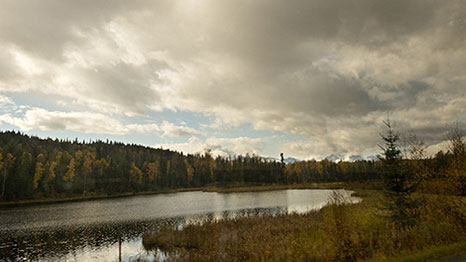