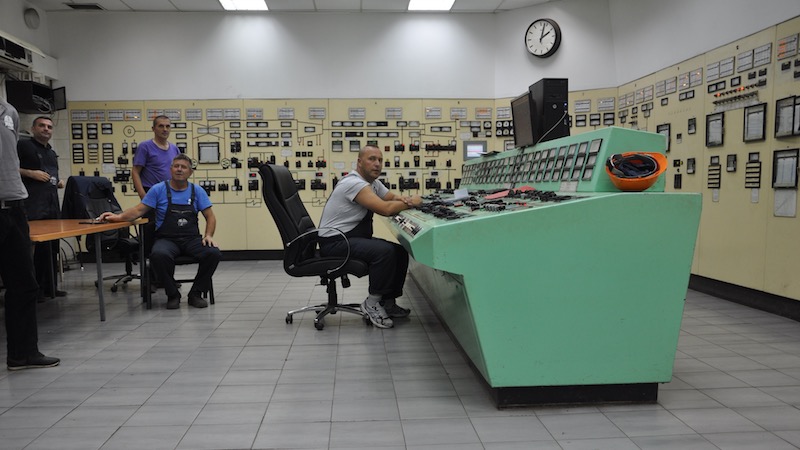 Workers in the control room of Kosovo A, a Tito-era coal plant the government wants to replace (Photo: Karl Mathiesen)

Kosovo C was the last exception to the World Bank’s no-coal rule. But it could not escape the new market reality of cheap renewables.

Chief executive Jim Yong Kim ended speculation about a prospective loan guarantee to the power plant this week, at a civil society event in Bali.

“We are required by our by-laws to go with the lowest cost option and renewables have now come below the cost of coal. So without question, we are not going to [support the plant],” he said.

That does not mean the project is dead. The Kosovan government still backs it and developer Contour Global is seeking alternative sources of finance. But it shows the World Bank’s pivot to clean energy is permeating through the organisation.

In perhaps even bigger news, the bank is increasing pressure on private sector partners to follow suit. The head of its International Finance Corporation, which works with 2,000 clients across 125 countries, announced it would “proactively seek” those looking to exit coal and demand more transparency on any remaining coal projects.

IPCC you in court

In the Netherlands, the court of appeal upheld a landmark climate verdict requiring the government to pursue deeper short-term emissions cuts.

The Urgenda case has inspired dozens of similar actions around the world. And many of them will take ammunition from the latest UN climate science blockbuster on 1.5C global warming, lawyers told Climate Home News.

Plaintiffs in the People’s Climate Case wrote an open letter urging EU politicians to align their plans with a 1.5C limit, citing impacts they already feel at 1C.

If you were in any doubt about how far the world is from living up to the Paris Agreement, the Intergovernmental Panel on Climate Change should have dispelled it.

Nothing less than remaking the human world in a generation will hold temperature rise to 1.5C, its latest output showed. It is not impossible, scientists told Natalie Sauer, but would require heroic efforts. We listed 37 things you need to know about the threshold.

For a full inside account of the negotiations on how to present the science, read Earth News Bulletin. It confirms, as sources in the room told us, that Saudi Arabia voiced a lot of scepticism. In one case, ENB drily observes that the Saudis questioned the credibility of a statement, only to be told by scientists it was based on more than 1,000 studies. Nice try.

Ultimately, most of the objections did not land. Together with Egypt, Saudi Arabia refused to endorse a reference to the Paris Agreement – but they were outnumbered and limited to registering their dissent in the meeting minutes.

The 1.5C report even landed on Donald Trump’s desk, White House correspondents established. The US president promised he would look at it, according to the official readout, adding: “I want to look at who drew it.”

It’s not a picture book, more’s the pity. “The special crayons we use to draw these reports were made by NASA,” quipped climate scientist Katharine Hayhoe on twitter.

The special crayons we use to draw these reports were made by NASA. https://t.co/tZvMxzDQKe

The IPCC draws heavily on “integrated assessment models” to show how energy and land use choices affect the warming trajectory. This approach has its critics, but it is undeniably influential.

So in one sense it was timely that Bill Nordhaus, a pioneer of this type of modelling, won the Nobel Prize for economics. On the other hand, he is credited with proposing 2C as a global warming target back in the 1970s – a goal the IPCC report shows is no safe guardrail.

What does Brexit mean for energy trade and nuclear cooperation between the UK and the EU? Sara Stefanini explains

“No more Paris Agreement. No more ministry of environment. A paved highway cutting through the Amazon.”

Our Manaus correspondent describes a truly alarming prognosis for the world’s biggest rainforest – and all who depend on it – under Jair Bolsonaro, poised to become Brazil’s next president after winning 46% in the first round vote.

The run-off against Fernando Haddad of the Workers’ Party is on 28 October.

Australia’s new prime minister Scott Morrison, meanwhile, is planning to stay in the Paris Agreement but ignore his country’s commitments.

He is not going to “tip money into that big climate fund”, he told radio station 2GB, referring to the Green Climate Fund.

It is another blow to the embattled fund ahead of a critical board meeting in Bahrain next week. Reminder: the last meeting collapsed over failure to agree on how to raise a fresh round of contributions.

The EU has a greener outlook, with both its parliament and environment ministers considering the science of 1.5C this week.

Lawmakers passed a resolution arguing EU emissions cuts should be deepened from 40% to at least 55% from 1990 levels by 2030, Euractiv reports.

The council of ministers was more equivocal, stopping short of a commitment to ramping up the bloc’s ambition. That reflected divisions between member states, with Poland trying to further weaken the conclusion.