Campaigners celebrated as an appeals judge endorsed their 2015 victory, confirming the Netherlands must cut emissions faster or breach its duty of care 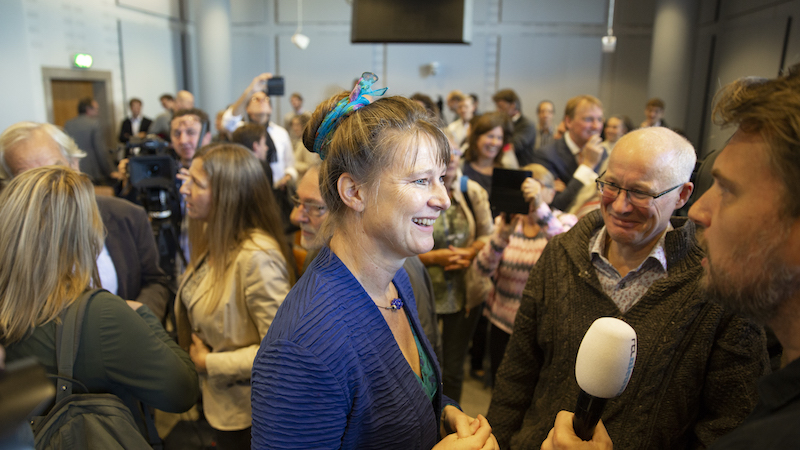 The Dutch government must stick to a tougher climate target, after an appeals judge upheld a historic court ruling on Monday.

Judge Marie-Anne Tan de Sonnaville endorsed a landmark 2015 victory for campaign group Urgenda and nearly 900 citizens, which forced the Netherlands to deepen its emissions cuts to at least 25% from 1990 levels by 2020.

The government has a duty to protect its citizens from the “real threat” of climate change, she said. That meant abiding by a minimum level of emissions cuts in the short term and not relying on sucking carbon dioxide of the air later, in the court’s opinion.

The Netherlands needed to have policies that aligned with its international commitments, according to the ruling. Its small contribution to global emissions was rejected as an excuse for inaction.

Explaining her rationale, the judge said: “Climate change is a grave danger. Any postponement of emissions reductions exacerbates the risks of climate change. The Dutch government cannot hide behind other countries’ emissions. It has an independent duty to reduce emissions from its own territory.”

Campaigners clapped, cheered and hugged each other in the Hague as the judge read out the verdict.

“Our victory today confirms that the Dutch government should have focused its efforts on increasing action on climate change, and not on fighting a case that has brought so much hope and inspiration around the world,” said Urgenda director Marjan Minnesma in a statement.

Monday’s UN special report on the science of 1.5C global warming underscored the urgency of action, Minnesma added. As a low-lying country, the Netherlands is vulnerable to sea level rise that comes as polar ice sheets melt.

Tuesday’s judgement gave “real hope”, said Joos Ockel, a co-plaintiff in the case, adding: “It is even clearer now than it was three years ago that climate change is the defining issue of our lives and our children’s lives.”

The Urgenda suit is part of a wave of climate litigation around the world, demanding stronger climate action or redress from governments and companies. Its argument was based on European convention, meaning it has potential to be replicated in other member states.

Tessa Khan, co-director of the Climate Litigation Network, tweeted the ruling was “a huge victory for all of us”, warning governments to prevent dangerous climate change “or expect to be held accountable in court”.

And @urgenda wins again!! A huge victory for all of us. Governments all over the world are on notice: take the action necessary to prevent dangerous levels of climate change or expect to be held accountable in court #ClimateAction #klimaatzaak

The Dutch government said it would implement the judgment but consider a further appeal to the supreme court, to clarify the court’s jurisdiction over policy choices, public broadcaster NOS reported.

In the past year, prime minister Mark Rutte has joined an alliance of member states calling for higher ambition across the EU. His coalition deal agreed in October 2017 included a commitment to phase out coal power generation by 2030, which means closing some plants early.