Our final bulletin of the 2019 talks. Sign up to Climate Weekly in your inbox… every week of the year 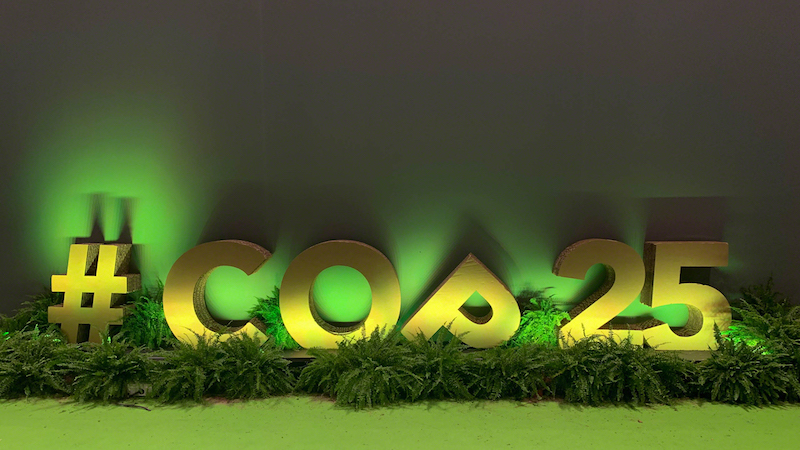 The UN process held together through another tumultuous conference... just (Photo: IISD/ENB - Kiara Worth)

It was the longest climate talks in history, eclipsing the 2011 Durban meeting by lasting 44 hours beyond the scheduled closing time.

The Durban talks produced a deal between countries that laid the foundations for the Paris Agreement. Madrid produced a weak gesture toward raising climate targets and failed to agree for the second year in a row on rules to govern carbon markets.

Chloé Farand reports on how the forces that are tearing the ties between nations dominated the summit. More on this below…

*** Thanks to We Mean Business for their support throughout this Cop and the year. Climate Home News’ journalism relies on sponsors like WMB. They do fantastic work bringing progressive companies together as the business world charges further and further ahead of the political space. ***

At Cop25, a few nations – Brazil, the US, Saudi Arabia and Australia in particular – were emboldened as never before to stand against the world and nakedly try to weaken efforts to tackle climate change to benefit their short term interests.

Call this, if you like, the Trump effect. The US president has blown apart the assumption that opprobrium from fellows will foment a race to the top on climate.

On the flip side, a far larger number of governments held firm; preferring to see no deal, than what they viewed as a bad deal. Call that the Greta effect. Certainly more leaders than ever feel their electoral futures are tied directly to their efforts on climate change.

Regardless of what happens to individual governments in the coming months and years, polarisation is the future of climate politics. Even as the impacts of climate change rain down harder, making citizens’ demands grow more potent, resistance from those who see action, not warming, as their existential threat will grow more desperate.

Resolution will be difficult to find. It’s hard to see how consensus politics will work any better at Cop26 in Glasgow than Cop25 in Madrid. Perhaps a change in presidency will help.

But the main item for next year does not require consensus: the raising of national voluntary climate targets. Bilateral deals – especially between the EU and China – could power the formation of a vanguard. With proper commitments on finance, developing countries could aid this push.

Perhaps the reason the Trump effect has been so powerful is because the contrast between the US and those who would be leaders has not been stark enough. If you want to create pariahs, you have to have a community.

Want a blow by blow of the final Cop plenary? Check this mega thread. And one from the fiery earlier plenary where many countries called for a leap in ambition.

Thanks to the tireless Chloé, Jill and Jocelyn for their work over the last two weeks and thank you to you for reading all of our coverage!

If you’ve benefited from our work, please consider joining our list of patrons, it’s cheap, and it’s a huge help.

Below is a list of some of the top stories we’ve published in the last two weeks.