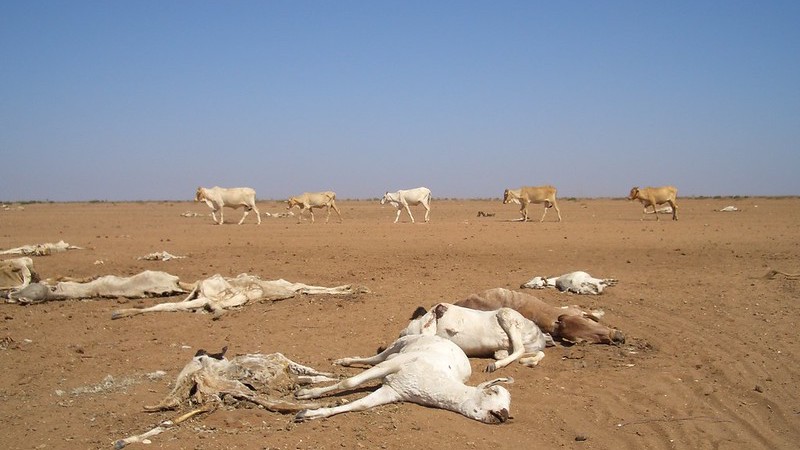 Livestock in Kenya die during a drought (Photo: Commons/Brendan Cox/Oxfam)

MADRID – Emissions cuts and adaptation efforts have not been enough to prevent climate change from destroying lives and livelihoods.

As a range of dangerous phenomena intensify because of global warming, countries are set to assess how these impacts – known as loss and damage – are accounted for.

The 2013 international framework to address loss and damage – known as the Warsaw International Mechanism (Wim) – is up for review. How this mechanism should be governed and financed is a major aspect of the Cop25 talks in Madrid this fortnight.

The framework intended that developed countries provide developing countries with finance, technology and capacity-building to help victims of climate change recover after extreme weather events or slower-onset climate disasters such as sea-level rise.

The UN has established funds to finance the transition to cleaner energy in poor countries and their adaptation to a heated world. But rich countries – which hold the historical responsibility for climate change – have dragged their feet on providing new finance to cover losses. Preferring to encourage the creation of insurance schemes.

They have also sought to avoid any liability and compensation claims for their historic responsibility in causing climate change, with the US a consistent opponent across multiple administrations. The US in now the process of withdrawing from the Paris Agreement, and in a Tuesday op-ed for Climate Home News Bangladeshi academic Saleemul Huq called for compensation to again be openly discussed.

“In my opinion that will never fly,” he said.

Still, the consideration of the Wim review – which took place on Sunday – is likely to see disagreements between rich and vulnerable countries at Cop25, as it has for decades.

In submissions to UN Climate Change ahead of Cop25, the typhoon-vulnerable Philippines said it was “imperative for finance to immediately and systematically flow” to address loss and damage impacts. The Alliance of Small Island States (Aosis) urged countries to “sufficiently and reliably” fund work to address the issue.

Fuller said countries that experience loss and damage should be supported through “finance but also capacity-building”.

The establishment of a financing facility remained a distant prospect, he said, with talks focused on reviewing the Wim.

“I don’t think we have reached that stage yet,” he said.

Civil society groups have called for financial support to go beyond insurance-based funding and humanitarian aid for climate victims to become systematic.

In an open letter to Cop25 president and Chile’s environment minister Carolina Schmidt, more than 150 civil society groups have called for the creation of a specific financing facility and debt relief to help vulnerable countries recover from loss and damage impacts. They argued regular contributions from wealthy countries and global taxes on financial transactions, international air travel and fossil fuels should finance the fund.

The letter comes after a report by a coalition of climate and environmental organisations estimated rich countries should provide an additional $50 billion per year by 2022 and $300 billion annually by 2030 to address loss and damage.

Harjeet Singh, global lead on climate change for ActionAid, told CHN: “The world is recognising a climate emergency but there is no global system to provide relief and help [vulnerable countries] to recover from the impacts.”