‘Common timeframes’: How they could speed or slow climate action

Russia and Japan want ten years. Vulnerable countries want five. Why the alignment the world’s climate plans is a contest of ambition 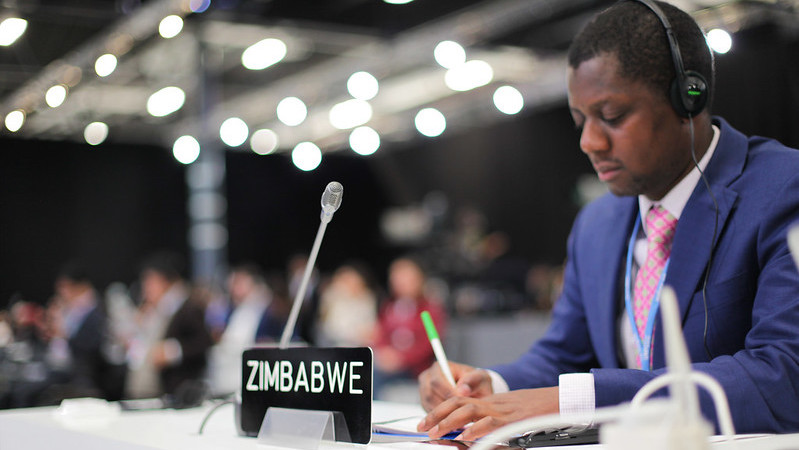 At talks in Madrid, least developed countries such as Zimbabwe are pushing for countries to have five year climate plans to leave space for greater ambition (Photo: UNFCCC)

As negotiations continue on the third day of the UN climate talks in Madrid, talks turn to a little highlighted but important part of the Paris Agreement rules.

Last year in Katowice, countries agreed that climate pledges made from 2031 onwards should all cover the same time period. But parties are yet to decide on exactly how long this time period should be, and the flexibility of this rule.

What are common time frames?

Under the Paris Agreement, countries submitted climate pledges. These initial pledges all begin in 2020, but covered a variety of time periods, from five to fifteen years.

The common time frame negotiation, which is taking place in Madrid, is an attempt to make the timelines of these pledges more uniform, allowing a more aligned set of goals that can be assessed and ramped up together.

“The idea is very simple,” says Li Shuo from Greenpeace China. “The common time frame is basically dealing with how long [Paris climate pledges] should be. Should they be five years, should they be ten years. And to what extent parties have flexibility in terms of choosing deadlines of their time frame.”

Aside from the new global carbon market, common time frames are the only part of the Paris “rulebook” yet to be resolved. Both issues were supposed to have been agreed on last year at Cop24 in Katowice but couldn’t find consensus.

Why does it matter?

NGOs and many countries argue the length of goals’ time frames will influence the ambition of climate action and affect the signals and certainty countries send to their citizens and businesses.

“Whether you have five year, ten year, it gives a sense of the acceleration, the pace of action,” says Yamide Dagnet from the World Resources Institute. “We need to just go faster, we cannot take the risk to lock in for too long something that some countries may think is high ambition when, collectively speaking, we need everybody to do more than they are currently doing.”

It will also influence other parts of the Paris Agreement, she says, such as assessment of each “trading period” of the new carbon market.

In addition, Dagnet says it is important to conclude these remaining discussions before next year’s UN climate conference in Glasgow, to leave space for focus there to be on raising the ambition of current climate pledges.

What are the options?

Lots of options still remain on the table for common time frames.

Five year time frames means initially all countries’ pledges should last from 2031 to 2035, although they could also include indications of longer term goals. This option is supported by most NGOs as well as several country groups including small island states, least developed countries (LDC) and the Environmental Integrity Group (EIG).

Sonam P Wangdi, chair of the LDC group, says five year time frames will avoid locking in low ambition and follow the five-year cycle of the Paris Agreement. “Every five years, successive NDCs that represent a progression and highest possible ambition should be submitted in response to the global stocktake,” he says.

Meanwhile, Japan and Russia are pushing for ten year time frames, arguing that this is more suited to their national planning.

Another option still on the table is to let each country decide themselves if they want five or ten year time frames.

Yet another option previously pushed by Brazil, known as “5 plus 5”, would set a five year time frame but provide an indication of the goals for ten years time which could be adjusted in the future.

There’s also disagreement over whether there should be a “lag period” for pledges, whereby pledges are set five years before the implementation period begins, as they were for Paris,

Other groups, such as the EU, argue the decision should just be delayed until later and have yet to take a clear position on what time frame they support.

“You have a large number of countries who have not made their preferred option clear,” says Shuo. “The most prominent one amongst them is the European Union. […]. And this is, I would argue, the primary reason why the issue has not been resolved.”

Countries begin the first round of discussions on Wednesday, with the first draft text expected on Friday.  “I think by the end of the week we will know more or less what will happen,” says Dagnet.

Shuo says: “If there is no clear move from the European Union, we won’t have a solution on this issue in [Madrid]”.