European leaders hope to strike a bargain with Beijing next September. What the EU can offer China to bring down its emissions is unclear 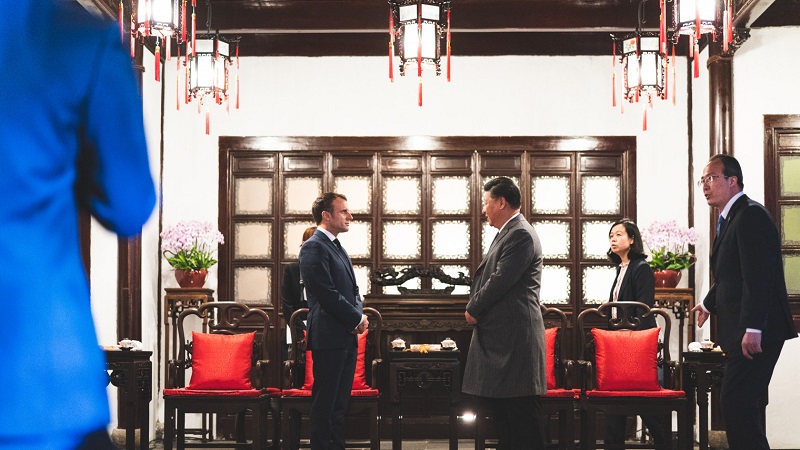 As the Trump administration formally notified the UN of the US withdrawal from the Paris Agreement last week, French president Emmanuel Macron was heading to China, plotting to ramp up the climate ambition of the world’s largest emitter.

Macron’s three-day state visit was part of a strategic rapprochement between Europe and Beijing ahead of an exceptional EU-China summit with the 27 EU heads-of-state and president Xi in September 2020.

The summit is poised as a crucial give-and-take moment for the two powers to broker a bilateral agreement on climate change – something only the US has previously achieved with China in 2014 in a deal that underpinned the Paris Agreement.

Now, with the US officially exiting the Paris regime, the EU hopes to start a race to the top with China, ensuring global efforts to cut emissions remain meaningful even without the US on board.

“Our aim is to lure China into the best possible announcement they can make about an upgrade of their ambition,” a senior EU official told Climate Home News. “We know that they are thinking about it and we also know that they will look for an occasion. In the global efforts of increasing ambition, the EU alone is clearly not enough but EU-China together puts things in a better place. If we get China, the rest of Asia will follow.”

Organised by Germany during its rotating presidency of the EU council, the EU-China summit, held in Leipzig, has been carefully timed to take place weeks before the UN biodiversity talks in China in October and the climate talks in Glasgow, UK, in November, when countries are due to update or enhance their climate plans. In the last half of 2020, China will be finalising its five-year-plan, which will define the country’s economic path for the period 2021-2025.

The Paris accord depends on countries voluntarily increasing their climate goals. Among the largest emitters, no-one is willing to move first or alone – making dialogue between great powers vital.

Over the last two years, Macron has played a key role in Brussels’ diplomatic engagement with Beijing. Standing in front of the European flag in Beijing for the signing of EU-China Geographical Indications agreement, Macron appeared as the EU’s interlocutor with president Xi.

“Climate change and biodiversity are at the heart of our common multilateral agenda,” Macron said during a joint press conference with Xi, adding he hoped the EU-China summit “can achieve very concrete results on this topic”.

In a statement, Macron and Xi reaffirmed prior commitments to update their climate plans in a manner “reflecting a progression and with the highest possible ambition level,” yet giving no further details about timing. China is on track to overshoot its 2030 target, suggesting enough wiggle room for an increase. Meanwhile, the new EU commission has backed increasing the bloc’s 2030 emissions reduction target from 40% to at least 50% from 1990s level.

New terms of engagement between China and the EU were first agreed when Macron surprised president Xi during his visit to Paris in March by inviting German chancellor Angela Merkel and outgoing European Commission president Jean-Claude Juncker – a visit Xi described last week as “very successful”. This was where the groundwork for next year’s summit was laid.

“The French president has marked an important stage,” Emmanuel Guérin, executive director for the international group at the European Climate Foundation told CHN. “The most important thing was to kickstart the process ahead of the summit between heads of state. Now everything is to play for.”

CHN understands the diplomatic channels to broker a deal on climate are currently being worked out.

For its part, China has shown it is keen to grow its strategic relationship with the EU by appointing ambassador Wu Hongbo as its first special representative on European affairs on 1 November.

For Macron, two important summits on biodiversity next year could serve as the backbone of his relationship with Xi, Sébastien Treyer, executive director of the French climate think-tank Iddri told CHN.

Marseille in southern France is host to the IUCN congress in June, the world’s largest conservation event and a key meeting ahead of the biodiversity talks in Kunming, China, four months later, when countries are due to agree on a global framework for plant and wildlife protection beyond 2020.

“But France is not the natural interlocutor to speak to China on behalf of the EU,” Treyer said.

Merkel, the longest serving EU leader, is a more likely partner for Beijing, Li Shuo, senior climate policy officer at Greenpeace China told CHN. “The relationship China has with Berlin is more substantial than with Paris because it has more economic interests,” he said.

A senior EU official told Climate Home News the climate issue, alongside trade, would be “absolutely top tier” at next year’s summit but the tactic to achieve a climate deal was “a slightly open question,” they added.

As the world’s two largest emitters, in 2014 the US and China both agreed to cut their emissions, leaving out contentious issues such as trade and strategic interests. But with a much smaller share of global emissions, the EU is unlikely to have the clout to make it a climate only affair. “The European offer for China to cut its emissions isn’t yet obvious,” said Guérin.

For Shuo, the talks will include trade-offs beyond the traditional climate diplomacy remit, favouring a broader agreement package – a strategy that includes multiple tension points on which the deal could fail. That was the case in 2017 when divisions over trade collapsed an EU-China statement in response to Donald Trump announcing his intention to pull the US out of the Paris accord.

What happens next? – Climate Weekly

China’s mega-foreign investment project, the Belt and Road initiative (BRI), extends to European countries and will likely form part of the negotiations. Speaking during Macron’s Beijing visit, president Xi said he wanted to “accelerate the negotiations on China-EU investments and to encourage synergy between the BRI” and Europe’s own strategy in Asia.

Technological research and cooperation could also help broker a deal. “China is really interested in the European experience of raising ambition,” said Treyer.

From lessons learnt about the EU’s emissions trading scheme and assistance in rolling-out offshore wind and green hydrogen technology, “these are the kind of things that the EU can bring to China – some kind of research deployment programme that can help these sectors grow,” said Alvin Lin, climate and energy policy director of the Natural Resources Defense Council’s China programme.

However, any agreement will have to overcome significant challenges within both China and the EU. The US trade-war, an economic downturn and protests in Hong Kong have bumped climate action down Beijing’s priority list. The new EU commission leadership has been delayed coming into office leaving “not much time to reframe and redevelop a relationship with China,” Lin added.

Internal EU politics – which recently thwarted a new European climate target – also could pose a significant barrier to a deal. “If the EU goes into the summit without a consensus on its climate target, that would be really bad news,” Greenpeace’s Li said, adding that any pre-made agreement between EU leaders would still need to leave enough room for negotiations with China.

Any divergence between EU member states could mean “the EU will have its hands tied,” said Yao Zhe, strategic climate communications officer at China Dialogue.

“If the EU cannot present an ambitious and updated plan itself, it will be very hard to convince China, no matter how hard the EU pushes,” she added.