Australia, US and Brazil threatening ‘spirit’ of the Paris Agreement, says Costa Rican minister, as fractious talks could drag into the weekend 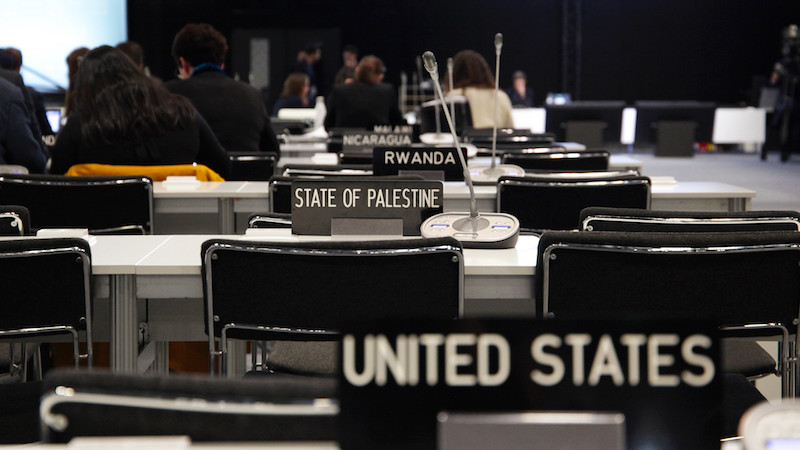 The plenary room at Cop25 in Madrid. Diplomats are locked in tense negotiations to try and find a deal (Photo: UNFCCC)

MADRID – Negotiations at the UN climate talks are going into extra time as diplomats are at loggerheads over commitments to boost ambition and rules to set-up a new global carbon market.

As the second week of negotiations drew to a close, negotiators were set to work through the night on Friday to find landing zones and finalise the last unresolved rules of the Paris Agreement.

“We are reaching the final hours of the Cop and now is time to show the world we are capable of reaching an agreement,” Cop25 president Carolina Schmidt told negotiators.

“The eyes of the world are on us. Our kids, the women of the world, indigenous people, our communities, the youth will not understand that we are not able to get to an agreement that is committed ambition to the world. It is our responsibility to find that agreement,” she said.

But entrenched positions have run into political deadlock, with little progress on the most contentious issues, including creating a new carbon market, known as Article 6.

In an unusual move, Costa Rica’s environment and energy minister Carlos Manuel Rodríguez called out “Australia, Brazil and the US” for blocking progress – a reflection of the tense atmosphere of the talks.

“Some of the positions are totally unacceptable because they are inconsistent with the commitment and the spirit that we were able to agree upon [in Paris in 2015],” he said. The US is leaving the agreement but remains a party until next year.

“On the last day of the Cop we should be very concerned because that high ambition for environmental integrity is being threatened by the lack of agreement,” he warned.

The question of environmental integrity is dominating the stalemate on carbon markets discussions. Loopholes to allow double counting emissions reductions and allowing old credits under the Kyoto-era to be traded on the new market – an option favoured by Australia – are still on the table. For most countries, these are red lines.

Meanwhile, developing countries warned the deadlock was undermining a package of measures that could have delivered much-needed finance and support to vulnerable countries affected by sea-level rise, droughts, floods and extreme weather events.

Calls for additional finance to help developing countries recover from damages caused by climate impacts were not included in the latest draft text. Instead, the text on loss and damage “urges” countries to “scale-up” finance and capacity-building. It also requests the creation of an expert group to explore further options to support vulnerable countries.

Another demand by developing countries to deploy a share of the proceeds from bilateral carbon trading between countries to the adaptation fund is being opposed by richer countries.

Chair of the African group, ambassador Mohamed Nasr of Egypt, told reporters: “We are seeing a regression not a progression, specifically because some countries don’t want to come forward on climate finance.”

“Our view is very clear: either we have through this process the funding, the technology that we think we deserve and should get or this process can continue for another year, we are fine with that.”

“No deal is better than a bad deal for our people,” he added.

One diplomat from the Philippines told the plenary on Friday afternoon the country was “concerned” about developments regarding long-term finance. “It is becoming increasingly apparent that we are backsliding on an hard-fought issue that is crucial for the successful attainment of the objectives of the Paris Agreement.”

Countries that joined a high-ambition coalition also expressed concerns the language of the draft Cop decision failed to include a clear call for countries to enhance their climate plans next year.

Under the Paris agreement, countries have to revisit their climate plans by 2020 and are under pressure to boost climate action before next year’s talks in Glasgow, UK.

“The high-ambition coalition will not walk away without a clear call for all countries to enhance their ambition next year,” said Tina Stege, the Marshall Islands’ climate envoy. “This is what was agreed to in Paris.”

The EU Commission has backed the coalition’s demands. Executive vice-president Frans Timmermans said all countries should head to Glasgow with plans and be held accountable for their implementation.

But other countries, including Brazil, China and India, have so far refused to commit to enhance their climate plans next year before rich countries deliver on pledges for providing finance and support to developing countries made before 2020.

One Indian diplomat told the plenary there was “no mandate” for making a top down decision on whether countries should enhance their target. “Of course,” he added “parties are welcome to update or scale up their ambition at any point in time.”