Comment: Trading carbon is widely said to make emissions cuts cheaper. But for whom? And why is it dominating climate diplomacy in Madrid? 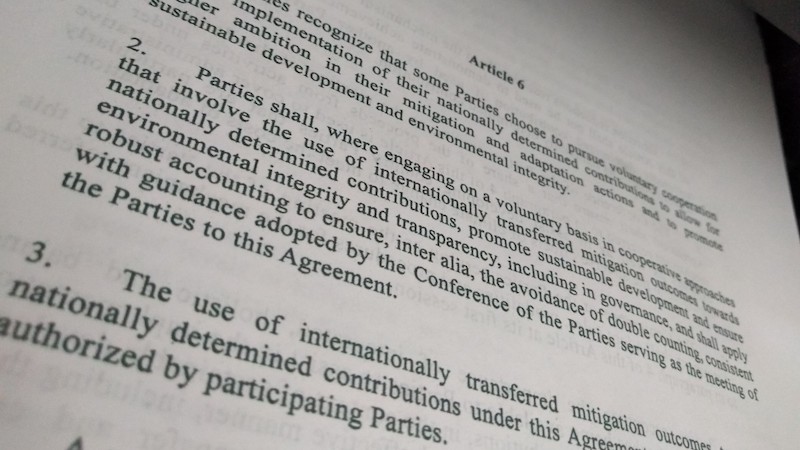 Can countries transform the global energy system using a mechanism fundamentally at odds with expert views on how systems actually change? At the international climate change negotiations in Madrid, we’re giving it a shot.

At this year’s talks, a major stumbling block is agreeing on rules for the “market based mechanism” established under Article 6 of the Paris Agreement. Although there are numerous market-based measures that could be used to address climate change, including a carbon tax, the mechanism established under the Paris Agreement centres on “the use of internationally transferred mitigation outcomes,” also known as carbon trading.  In short, carbon trading means that if it’s expensive to meet my emissions reduction target at home, I can undertake less expensive reduction measures abroad and then count the emissions avoided abroad towards achieving my domestic target.

As stated in the Article 6 “explainer” by Climate Home News, “countries agreed to set up a new global carbon market system to help countries decarbonise their economies at lower cost.” The present problem, it notes, is that “Countries have tried and failed to agree to the rules governing this mechanism,” despite the fact that “a majority of national plans include the use of carbon markets to achieve cheaper emissions reductions.”

The key selling point here is clear: ‘lower cost’, ‘cheaper emissions reductions’. What’s easier to miss are some critically relevant questions? Cheaper to whom? Lower cost than what?

Few would disagree that to achieve the global climate goals of limiting warming to 1.5C or 2C, there is a massive amount of work to be done, not least of which is to fundamentally transform the fossil fuel based global energy system.  The Paris Agreement is countries’ arrangement to share this burden, their contributions being determined voluntarily at the national level. Most agree that the contributions put forth to date are grossly inadequate to the task. In short, we have a long list of difficult, essential actions and an increasingly short time to do them.

Enter carbon markets, which as noted above, are widely thought to lower the costs of reductions. But do they lower the overall costs of the work to be done? Or do they simply prioritise the cheapest actions, leaving the more expensive work for someone else to do later? If we have to undertake a full set of measures, but the richest actors only want to do the cheapest ones, who is going to do what’s left? When the poorest can’t, and the richest won’t, the answer is no one.  And this is where we are.

For a better understanding of the work necessary to transform the global energy system, it helps to look at elementary systems analysis and design theory. One of the great minds of systems analysis, Donella Meadows, emphasised that to bring about change in any system, one has to intervene at the core, including most fundamentally, the paradigm that drives the system (here, extracting and burning fossil fuels for energy). Other effective places to intervene are the goals of the system (Provide energy? Protect the environment? Secure easy profit?); the rules of the system (Extract from public and private property? Both onshore and offshore? Even from protected areas? Are there limits on burning? Is there liability for damages?); and the information flows (Who are policymakers listening to, victims or profiteers? And who controls what information is available to whom?).

Interventions further out at the parameters (e.g., subsidies, taxes, standards) simply won’t do the trick, Meadows stresses.  In the case of climate change, focusing only on emissions is working precisely on a single parameter, a symptom of the system, and carbon trading touches only mildly on this parameter.

Nonetheless, so much weight has been given to carbon trading — by powerful countries, wealthy banks and single-minded traders eager for a quick return — that it has taken on its own wildly disproportionate gravity within the climate solutions discourse. Of course, being paid to sit on industry panels year after year in luxury hotels by the beach doesn’t make you expert on the ocean. Rather, it tends to distract you from making the basic observations necessary to understand it.

Here, it’s worth noting that carbon trading not only flies in the face of what’s known about how systems actually change; it’s also rather anti-scientific, because it ignores the evidence and yet remains wedded to its own hypothesis. We now know from abundant experience from various carbon markets how these trading systems can be gamed and cheated. We have examples of emissions reduced in one location only to be released in another; of reductions credits generated when no reductions actually took place; of double counting reductions, once in the county where the action took place and then again in the country to which the credit was traded; and of over-allocating free carbon credits to the biggest emitters, who, because of such allocations, are in the end not even forced to reduce their emissions at all.

We even know of the development of deeply perverse incentives that have led to more emissions than would have occurred without any trading system at all.  See, for example, the HFC-23 debacle, where traders were essentially paid ten cents for destroying banana peels when the price of bananas was only five cents. Not surprisingly, people grew and sold a lot of bananas, except the “bananas” in this case were actually super-pollutant fluorocarbon emissions, thousands of times more powerful than carbon dioxide.

All of these real-world experiences have clearly undermined the carbon trading hypothesis at almost every turn, but those with vested interests in the hypothesis nonetheless managed to keep it thriving. Now we are told we only need better rules for carbon trading in order to solve these problems, which is exactly what countries here in Madrid are failing to agree on. This discord is likely to continue, precisely because the players are more interested in how the rules will benefit them than in how efforts on this parameter might give the energy system an alleged nudge.

Numerous recent scientific reports frighteningly suggest that the worst-case outcomes from ongoing warming are close to becoming inevitable.  But the fossil fuel system remains in place due the enormous wealth it continues to generate for a powerful few.  The good news is we’re trying to change this.  The bad news is we’re trying to do so with a mechanism that remains popular, not because it’s been shown to work, but because it drives the expectation of significant profit by a powerful few. Meadows might consider this greed to be another paradigm at the core of the system that needs to change.

Until then, the fossil fuel energy system will maintain its homeostasis, unperturbed by even the most widely subscribed puttering about at the parameters.

Dennis Clare is the president of the Institute for Energy and Climate Strategies and an adviser to small island developing states for whom he served from 2009-2017 as a negotiator in international climate negotiations and the Montreal Protocol.