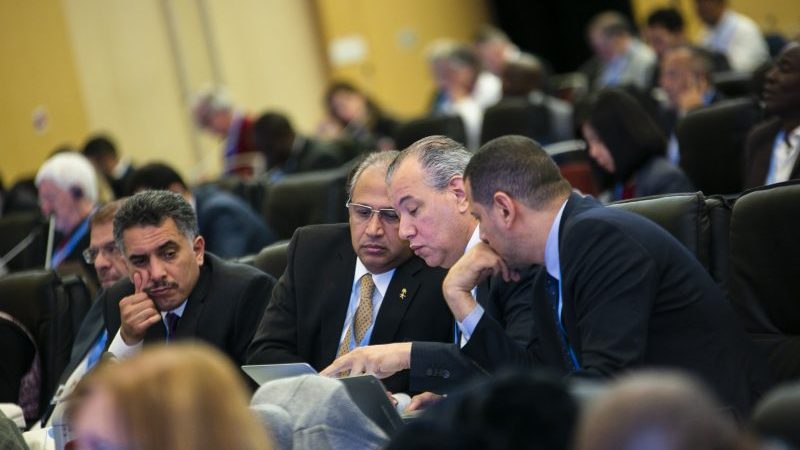 International talks on how to present the science around 1.5C of global warming just ran into overtime in Incheon, South Korea.

National delegates are expected to argue well into Saturday about the feasibility of holding temperature rise to 1.5C – the stretch goal of the Paris Agreement – and its implications for sustainable development.

The country’s diplomats want to emphasise the costs of climate action and downplay the sustainable development benefits, a source said.

The version issued to governments before the meeting had some inconvenient conclusions for oil producers. For example, it said fossil fuel investment would fall by a quarter over the next two decades in a 1.5C-compatible scenario.

One observer described the Saudi delegation as “more aggressive and virulent – both in terms of issues and airtime – than any time in my memory”. Others confirmed the Saudis had been vocal, but did not see their behaviour as different to previous meetings.

The US is reportedly keeping a lower profile, but leaked pre-meeting comments from the Trump administration reveal some pro-fossil fuel talking points.

“Science alerts us to the gravity of the situation, but science also, and this special report in particular, helps us understand the solutions available to us” – Hoesung Lee, chair of the Intergovernmental Panel on Climate Change, at the start of this week’s meeting

Meanwhile, the EU is pushing for stronger warnings on the risks of exceeding 1.5C, according to documents seen by CHN.

Brussels also went in with the stance that scenarios involving a temporary overshoot of the 1.5C threshold should not be considered “1.5C consistent”. That would give the EU a lot less wiggle room for claiming it is in line with 1.5C as it develops its own long-term strategies.

Of course, the top IPCC scientists are there to make sure the final wording reflects the underlying evidence. They are a bulwark against any government using the report to make unfounded claims, but may come under pressure to remove or downplay conclusions where the interpretation is disputed.

As soon as the final text emerges, we will be scrutinising it to see which narratives got the upper hand. And we will be asking the decision-makers: what next? Look for our special coverage on Monday.

EU environment ministers will be among the first to to consider the report’s implications, at a council meeting next Tuesday, Claire Stam of Euractiv reports. Member states are set to consider whether to commit to raising the bloc’s ambition before 2020, in light of the evidence.

While waiting for the IPCC talks to get interesting in South Korea, Natalie Sauer met villagers living in the shadow of the world’s third biggest coal plant.

They welcomed the news that their province, South Chuncheong, had joined an international coalition to phase out coal power – the first Asian province and biggest coal user to do so. But much depends on the willingness of central government to close plants and promote clean alternatives.

18GW – the capacity of coal power stations in South Chungcheong

Geoengineering, or manipulating the weather, is one of the most contentious topics in the fight against climate change.

So it’s a bit of a jaw-dropper that China is carrying out a large-scale experiment to boost rainfall over the Tibetan plateau, with no apparent international oversight.

The system involves a network of cloud-seeding burners over an area three times the size of Spain, South China Morning Post reports.

Can’t wait for the 1.5C report to drop? Fill the time by exploring our friends at Carbon Brief’s mammoth infographic on the differences between impacts at 1.5C and 2C warming.

They’ve also got a handy primer on how models are used to map potential ways to meet global temperature goals. Pro tip: skip straight to the section on limitations of models for the good stuff.

On Sunday, the first round of Brazil’s presidential election is one for the whole world to watch. Will the country that houses the world’s biggest rainforest will elect a climate denier as leader? Jair Bolsonaro, who wants to pull out of the Paris climate deal, has surged in the polls.