De facto presidential frontrunner says he would follow Donald Trump out of the international pact, drawing criticism from the UN’s environment chief 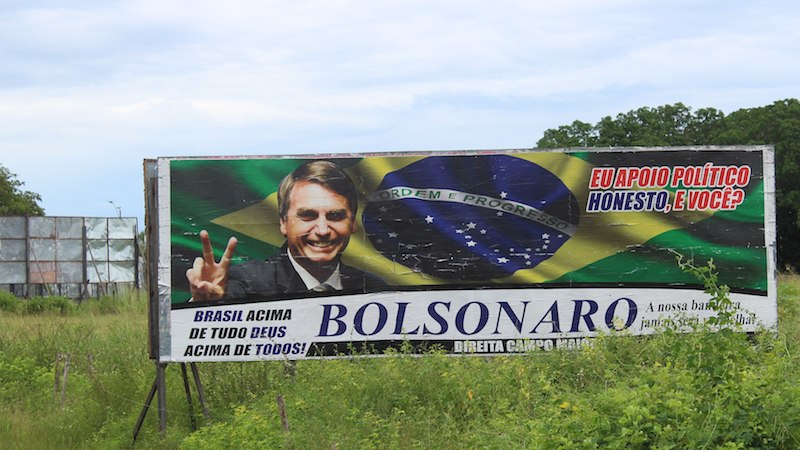 Jair Bolsonaro says he would withdraw Brazil from the Paris Agreement if elected president (Photo: Commons)

Presidential candidate Jair Bolsonaro is threatening to take Brazil out of the Paris Agreement if he wins the October election.

In an unpredictable race, the right-wing Bolsonaro is polling second behind Luiz Inácio Lula da Silva, the socialist former president. But “Lula” is in jail for corruption and likely to be disqualified by the courts, leaving a scattered field.

At his campaign launch last month and in subsequent interviews, Bolsonaro said he would join Donald Trump’s US and withdraw from the Paris pact.

“A rejection of the Paris Agreement is a rejection of science and fact,” Solheim said. “It’s also a false promise, because politicians who present climate action as a cost to society have got it all wrong.”

“The policy message is that we can and should remain in the Paris Agreement (because) it is possible to effectively implement the commitments that have been made,” Thiago Mendes, secretary of climate change in the Environment Ministry, told Reuters.

The withdrawal of such an important developing country, home to the world’s largest rainforest, would deal a blow to international climate cooperation. While it has not been confirmed, Brazil was expected to host the 2019 UN climate summit.

But Brazilian experts downplayed the likelihood of Bolsonaro carrying out his threat.

Unlike in the US, Brazil ratified the Paris Agreement through its congress, said André Guimarães, head of the Amazon Environmental Research Institute (Ipam).

“Honestly, I think that there is very little chance that [a withdrawal] happens,” he said. “My guess is that even if Bolsonaro wins and wants to change the deal, it will not be an easy task.”

Citing research showing that Amazon deforestation could hit rainfall and therefore agriculture, Guimarães said climate action was in the national interest. “Stopping deforestation is good business for Brazil, not just for environmentalists.”

Bolsonaro has not elaborated on why he opposes the Paris Agreement, but some clues can be found in his social media activity.

Last August, Bolsonaro shared an interview with Ricardo Felicio, a geographer and prominent climate denier who disputes the basic physics of the greenhouse effect.

The day after Trump announced his intention to quit the Paris deal, Bolsonoro shared an article defending the decision entitled “the greenhouse fables”.

Bolsonaro’s three eldest sons, all elected officials, have been more outspoken on the issue.

Eduardo, a federal representative from the state of São Paulo, posted a homemade video in January characterising the Paris deal as a globalist conspiracy. “It doesn’t make any sense,” he told viewers from a snowy part of the US.

A photograph, reportedly taken last week, shows Eduardo meeting former Trump adviser and far-right propagandist Steve Bannon in New York. Bannon was one of the strongest White House advocates for the US to withdraw from the deal.

Carlos, a city councillor in Rio de Janeiro, blamed the “leftist agenda” for climate change getting media coverage in a 2016 tweet. He asserted – against all evidence – that the world was cooling.

Flavio, a federal representative in Rio, has called global warming a “fraud”.

It comes as Brazil faces international pressure to tackle an up-tick in deforestation, particularly from Norway, which supports forest protection efforts through the Amazon Fund. Last year, Norway more than halved its annual payment to $35 million, citing poor results.

Michel Temer’s administration has courted the beef lobby, rolling back forest protections to allow the expansion of cattle ranches, soy plantations and mines.

Ten scientists wrote in a letter to the journal Nature Climate Change last month that such moves jeopardised Brazil’s climate goals. “The abandonment of deforestation control policies and the political support for predatory agricultural practices make it impossible to meet targets consistent with Brazil’s contribution to a 2C world,” they said.

Climate Action Tracker notes the 2020 target, which the government claimed as an early win, was in fact already mostly achieved in 2012, having been weakened by artificially inflating the “business as usual” baseline.

The outlook for meeting the tougher 2030 targets is poor based on current trends, according to analyst Paola Parra: “It is not looking great for deforestation for the future.”

Ipam’s Guimarães agreed. “It is very easy to play with numbers,” he said. “At some point in the future, the challenge for Brazil is to stop deforestation.”