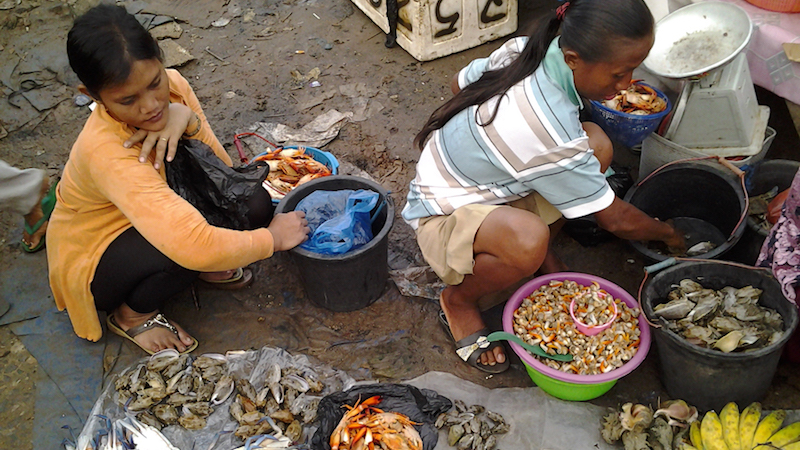 Fish sellers at a market in Indonesia. Communities throughout the tropics rely on reefs for food and income (Photo: Noaa)

By Karl Mathiesen and Natalie Sauer in Incheon

The European Union has called for a strict interpretation of the 1.5C global warming threshold in a landmark UN climate science report due out on Monday.

Scenarios in which temperatures temporarily exceed 1.5C above pre-industrial levels should not count as aligned with the Paris Agreement’s tougher target, the bloc argued.

As this article was published, the world’s top climate scientists were deep in talks with government diplomats in a conference hall in South Korea. They face an all-night session in their attempt to agree what the report will say about the feasibility of halting warming at 1.5C – and what happens if we fail.

The final summary of the report, which will be delivered on Monday, will describe “pathways” that could see the climate stabilise at 1.5C by 2100. Almost all of these scenarios include some form of “overshoot”, before temperatures are lowered again by sucking carbon dioxide out of the air.

In confidential comments, lodged prior to this week’s meeting and seen by Climate Home News, the EU said drifting above the threshold would bring irreversible effects such as the loss of coral reefs, “with unprecedented consequences on societies and economies”.

Sources at the meeting of the Intergovernmental Panel on Climate Change in South Korea told CHN language has been agreed that will state with “very high confidence” that warming to 2C would destroy more than 99% of all coral reefs. At 1.5C, reefs will decline by 70-90%.

“Half a billion people depend directly or indirectly on coral reefs for their livelihoods, hence loosing coral reefs does not only mean loosing a unique ecosystems with very rich biodiversity,” said the EU comment, adding that “1.5C consistent pathways must not include overshoot”.

The comments also said breaching the 1.5C limit “will likely trigger a cascade of negative effects and consequences which we cannot oversee in their entiety [sic] and therefore swift action… to reverse global warming is the only rationale [sic] insurance strategy.”

The EU questioned why earlier drafts of the summary had only applied “medium confidence” to a statement that overshoot scenarios posed a greater risk than stopping warming at 1.5C. The EU called for this to be changed to “high confidence”.

Research published by the Royal Society in April found overshoot was “unavoidable”, unless you adopt a generous estimate of the amount of CO2 that can be emitted under a 1.5C threshold and technologies for removing carbon are rapidly deployed.

But Bill Hare, CEO and senior scientist at Climate Analytics, stressed that scenarios with limited or no overshoot exist. “At the EU level [they] require higher ambition for EU 2030 [national climate] goals, more renewable energy and faster electrification of transport,” he added.

The EU faces two major climate policy decisions in the coming year: whether to amend its current 2030 target and what to aim for by 2050. According to reporting by Euractiv, EU environment ministers are preparing to acknowledge that the lower 1.5C target of the Paris Agreement is preferable to 2C.

“The commission is still working on its long term low emission strategy and will propose a first draft in November. The IPCC special report, once adopted, will present crucial scientific input for our long term strategy,” said Lynn Rietdorf, a spokesperson for the European Commission.