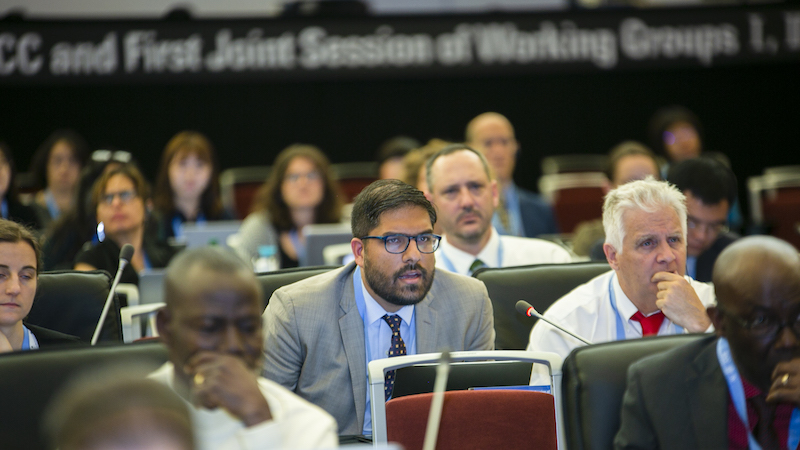 Confidential US comments on a landmark global warming report raise doubts about the science behind it, warn that it risks crimping economic development and advocate for carbon-catching technologies.

The nine pages of comments on a draft of the UN report reflect the views of multiple government agencies and reveal a US diplomatic corps trying to speak to multiple constituencies – the global community, their own domestic interests and the White House.

The comments, which Climate Home News has seen, also set the scene for a political battle over the report summary, which is up for negotiation in South Korea this week after two years of preparation and due to be published on Monday.

Broadly, Washington argued that scientists had downplayed the scale of the challenge to limiting global warming to 1.5C – the lower target of the Paris Agreement. To meet that challenge, the US called for more emphasis on clean technologies that the Trump administration has consistently supported – including carbon capture and storage and nuclear power. At the same time, the US warned, measures to tackle global warming must not interfere with cutting poverty worldwide.

This is the first time the Intergovernmental Panel on Climate Change (IPCC) has studied the effects of a global temperature rise of 1.5C above pre-industrial levels, rather than 2C, and how it can be achieved. The final “summary for policymakers” (SPM) will set the basis for efforts to raise national pledges for reducing greenhouse gas emissions, which are currently on track for a rise of around 3C by 2100.

“The SPM narrative fails to communicate the scale of the global technological and economic challenge to meet the 1.5C objective,” the US said in its comments. “The SPM implies that these challenges will be minor and any trade-offs easily resolved, whereas the underlying report and the published literature clearly demonstrate the scope and depth of these barriers to limiting emissions consistent with 1.5C.”

At the same time, the US raised doubts about the science behind the report. “There is no discussion – or a summary thereof – in the SPM regarding the credibility of models (or methodologies) used in the report to project future impacts.”

The comments are just a few of some 42,000 received by authors during the process of drafting the report. One of the key questions now is how hard the US will push this week to see its interests represented in the final summary – and how far it gets. Some of the US passages will be unacceptable to the scientific community. Others will find opposition among countries that want to use the report as the scientific basis to call for more rapid emissions cuts. But they will also find allies among countries worried by tougher targets.

The state department did not wish to comment. CHN understands that the comments reviewed here are not the entirety of the US contribution to the report and that they do not necessarily represent official policy.

Here is a rundown of some of the US comments, and what they tell us about the government’s position.

Insight into US thinking

The US complained the draft had failed to acknowledge a previous IPCC finding that “most” climate models had overestimated the rate of global warming since the 1990s.

This referred to an unexpected slowdown in temperature rise during the first decade of this century. But a succession of very hot years has overturned this finding, bringing global temperatures in line with predictions, according to two US scientists CHN spoke with.

Michael Wehner, a senior staff scientist at the Lawrence Berkeley National Laboratory and lead author on the earlier IPCC report in question, said: “The statement is no longer true with the recent exceptionally warm years, which is what we expected in 2009.”

The US’ demands that uncertainties around climate modelling be placed in the foreground of the report reflect long-running campaigns to discredit science by right-wing think tanks that are influential with president Donald Trump. The fact that they’ve made it into the government’s comments show that these campaigns are making inroads.

Stop climate change, but not development

One theme the US returned to repeatedly was the “outsized focus” placed on sustainable development by the report authors, which it said went beyond their mandate.

“The IPCC should not take it upon itself to plot a vision for global attainment of sustainable development goals via climate policy,” it said.

Developing countries disagree. Separating the future prosperity of the world’s poorest countries from the global response to climate change is impossible, according to the chair of the least developed countries UN group, Gebru Jember Endalew.

“While the challenge ahead in addressing the impacts of climate change is immense, so too are the opportunities,”said the Ethiopian diplomat. “Responding to climate change opens doors for sustainable development and for lifting many people out of poverty.”

Energy is good, too

The US also questioned whether limiting the temperature rise to 1.5C was the best way to slash poverty and improve well being, noting the benefits associated with higher energy consumption.

“The SPM fails to note that recent decades have seen the fastest declines in global poverty in both numbers and proportion of population even as fossil fuel use has exploded,” the US stated. “The fastest and greatest declines in poverty have occurred in China and India even as they have ramped up their use of fossil fuels.”

The global temperature is already 1C above pre-industrial levels, yet, the US said, “humanity has never been more prosperous, less poverty-stricken, less hungry, longer-lived and healthier than today”.

But that argument is “nonsensical”, countered Robert Kopp, director of the Institute of Earth, Ocean & Atmospheric Sciences at Rutgers University and a lead author on the US government 2017 climate assessment.

“It’s like saying that, because average life expectancies in the US are growing, overuse of opiates isn’t a problem,” Kopp said.

By calling for more weight to be given to the challenge of sticking to 1.5C, and to the fact that emissions reduction pledges so far are inadequate, the US pushed the Trump administration’s preferred solutions.

At the top of that list: carbon capture and storage technologies, along with management of forests and nuclear energy. “Aggressive” near-term cuts in more potent greenhouse gases, including methane, black carbon and hydrofluorocarbons, could also moderate global warming, it said.

The potential for energy efficiency received “less than satisfactory treatment” in the draft, while technology to better respond to energy demand – and reduce waste – was neglected, it added. On the other hand, the report should delete a “policy prescriptive” mention of carbon pricing as a necessity, and instead discuss its role.

One of the most notable changes between the current draft and the one before it was the introduction of the word “substantial” to describe the difference between impacts at 1.5C and 2C. This may indicate growing confidence among scientists that the lower Paris Agreement limit is a dangerous line to cross. The US argued that the word was “undefined”, “subjective” and “meaningless” and should be removed.

“It’s a major problem to use the term when discussing the difference in impacts at 1.5C versus 2C of warming,” it said. “Saying losses [in species] are ‘substantial’ could be interpreted as a 10% in the minds of some readers and 75% in others.”

Note: Michael Wehner’s affiliation was changed from the department of energy to Lawrence Berkeley National Laboratory.