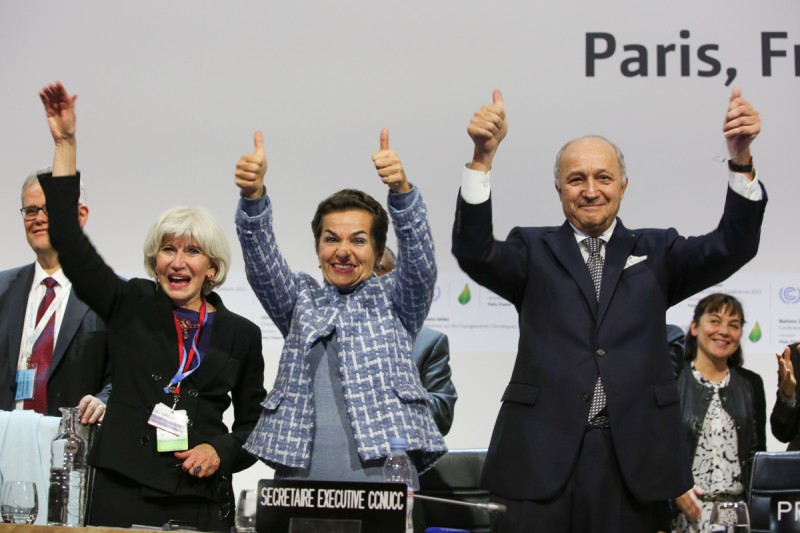 The head of the UN’s climate body will step down after six years in July. Tributes poured in for Christiana Figueres, a key broker in last year’s global warming accord in Paris.

“Christiana’s contribution to international climate negotiations over the last six years has been really extraordinary,” said leading climate economist Lord Stern. “She is gifted with an outstanding ability to see where we need to go as a world and to bring people together.”

It leaves the body on an unsteady footing going into the next round of annual talks in Marrakech. Paris was a breakthrough but much remains to be ironed out, Figueres’ predecessor Yvo de Boer wrote in Climate Home this week.

“Looking ahead, despite all the achievements at COP21, there needs to be a stronger sense of honesty, objectivity and reality.  The Paris outcomes remind me of Neil Armstrong when he stepped onto the surface of the Moon,” said de Boer.

The outcomes of Paris are almost the reverse of his famous line, “This is one small step for a man, one giant leap for mankind.” COP21 ended with an agreement and achieved a political breakthrough, but it was a small step for mankind because the commitments agreed in Paris are modest from the perspective of environmental challenges.

The musical chairs don’t end with Figueres. Days after saying he was staying as President of the UN climate talks, Laurent Fabius stepped down, with Segolene Royal replacing him. She’ll be in charge of ensuring countries keep to the promises they made in Paris.

Late Friday we also learnt the executive director of the Green Climate Fund, Héla Cheikhrouhou, plans to stand down in September at the end of her three-year term.

Must read: A day in the life…
…of Angola’s climate change envoy Giza Gaspar Martins at the Paris talks.

It’s not “remotely likely” an incoming Republican would pull out of the Paris climate agreement, according to lead US envoy Todd Stern.

On the second leg of a European tour, Stern told reporters in London he anticipated the courts would back President Barack Obama’s flagship Clean Power Plan climate policy, despite a recent court ruling placing it on ice.

“We anticipate it will be upheld but if for whatever means we’d have to use other means to get our targets… but we’re sticking to our target,” he said.

Kiribati’s president expects the first climate change refugees to abandon the island by 2020. He was speaking at a meeting of Pacific countries, to talk through strategy after the COP21 summit. “If we don’t raise our voice, nobody cares,” he told delegates.

“Unity, comradery and fraternity were not in short supply over the course of the three days; encouraged by the disarming charm and welcoming smiles of the Pacific frontline activists. However, the atmosphere was electric with ideas and challenges meaning that tough questions and even tougher conversations around allies, colonisation, militarisation and privilege were in abundance,” – climate campaigner Kya Lal reports from Wellington

Palestine aims to submit a climate plan to the UN by the middle of the year, its lead envoy has told Climate Home. It is gearing up to contribute to the global warming agreement struck in Paris last December, said representative Nedal Katbeh-Bader. “We have a clear vision.”