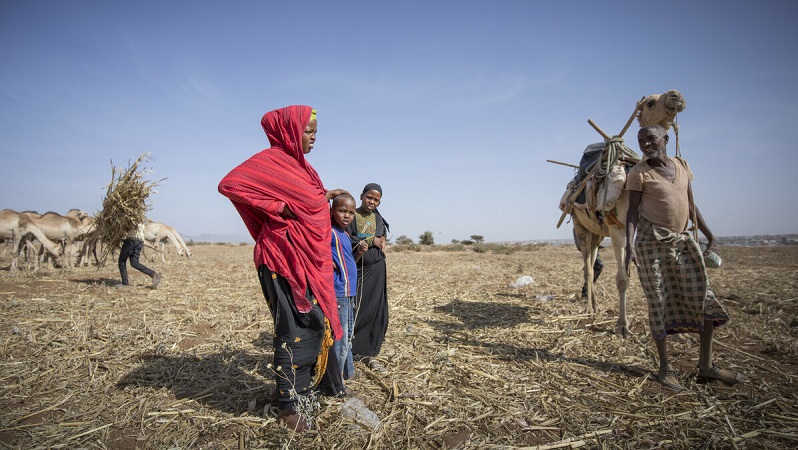 The Ali family has had to flee their home following clashes in Ethiopia are struggling to survive caught between conflict, drought and a plague of desert locusts (Photo: Petterik Wiggers / Oxfam)

A month into Russia’s war on Ukraine, its bombardments are not just striking terror into those sheltering in basements but spreading dread among poor communities hundreds of miles away.

By cutting off the breadbasket of Europe from global markets, the conflict is pushing food prices to alarming highs.

This is most keenly felt in East Africa, where reserves have been stretched thin by a series of droughts, desert locust swarms and the Covid pandemic. The region depends heavily on wheat imports from Ukraine and Russia. Without those supplies, millions of people cannot afford to fill their bellies, charities warn.

And there are already signs that as they respond to the war and rampant inflation, rich governments may be neglecting their obligations to developing countries. The same US bill that only had $1bn for international climate finance found $13.6bn of aid for Ukraine, notes Mattias Söderberg.

China’s five-year plan for energy was officially unveiled this week, with no sign of an acceleration of its clean energy transition.

Following blackouts last September and rising import costs, Beijing is prioritising energy security over climate goals, analysts say. That means producing more of everything at home, including oil and gas.

While the pace of coal power additions has undeniably slowed down, it has not stopped yet.

“Countries could become so consumed by the immediate fossil fuel supply gap that they neglect or knee-cap policies to cut fossil fuel use. This is madness”

In a glimmer of good news, the World Meteorological Organization is proposing a practical target to save lives and prevent costly damage from weather disasters.

A third of the world’s people are not covered by early warning systems, rising to 60% in Africa.

Putting that right would cost a mere $1.5 billion over five years, the UN body estimates, promising to present an action plan at Cop27 in Sharm el-Sheikh, Egypt later this year.

are not covered by multi-hazard early warning systems