Comment: Indonesia is reluctant to exclude Russia from this years’ G20 summit, which could turn a climate forum into a political theatre 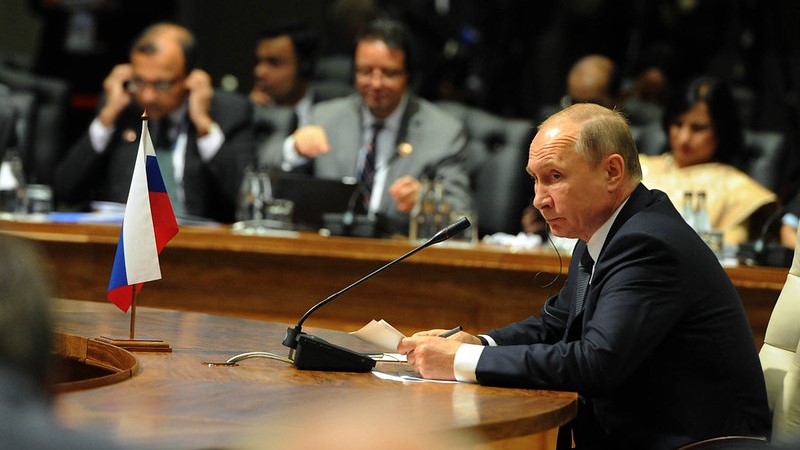 Vladimir Putin during a summit of the BRICS countries in 2018 (Photo: DIRCO/ Government ZA/Flickr)

Less than a month after the Russian invasion of Ukraine, the conflict which has so far caused thousands of military and civilian deaths and forced millions to flee, has already been dubbed a “climate change war”.

Much analysis has focused on Russian fossil fuels, speculating that president Vladimir Putin is aiming to rebuild the Russian empire with one imperial centre while Russia still has the carbon revenues to pay for military action.

It has also been noted the invasion of Ukraine is stimulating a rush away from fossil fuels, from the mothballing of the Nordstream 2 pipeline to the multiple places where governments are channeling greatly increased funding to renewable energy.

This latter reading of the situation gives some cause for hope. The long-term impact is likely to be to encourage many – if not all – big economies to seek to massively reduce their dependence on hydrocarbons.  This can only be good, not just for the climate, but also because the oil economy globally supports autocratic governments on a significant scale and well beyond Russia.

But moves to isolate Russia by targeting its oil and gas revenues lay bare the fragility of the multilateral system we have been relying on to provide agreement and solutions to the global climate crisis. The most consequential but most uncertain impacts of the Ukraine tragedy may be in the area of global governance. Will the world still have systems capable of doing anything serious and useful at all?

Upcoming summits will provide some answers. The idea of Putin as international pariah is very much a US and European one, and may not be shared by G20 hosts Indonesia, who have signalled a reluctance to exclude Russia from this year’s summit. The meeting in Bali this November could become a very interesting piece of political theatre if Putin is invited and others are forced to decide whether to also take part.

All indications are that Germany, the G7 president for 2022, will push ahead with the concept of an “international climate club” as the central climate initiative for the group this year. Chancellor Olaf Scholz has outlined the vision for an “open, collaborative club” that “will set joint minimum standards, drive climate action that is internationally coordinated and ensure that climate action makes a country more competitive at the international level”.

But without resonance from the G20, the impact on global emissions could be negligible. A key issue is whether big emitters return with upgraded climate plans before or at Cop27 in Sharm El-Sheikh, Egypt.

There had been reasonable grounds to hope that countries such as Indonesia, Brazil, Australia and India might do this. If the question of Russia impedes coordination between the G7 and the G20, it will weaken the chances of mobilising strengthened targets.

Ultimately, the likelihood of substantial multilateral progress on climate will rely heavily on China. In providing a certain amount of diplomatic support and cover for the Russian invasion of Ukraine, it has raised concerns that it could go further and offer a range of economic and military support, thereby risking a general deterioration in the capacity for globally coordinated multilateral action that could severely disrupt global climate negotiations.

Nothing matters more than increases in climate ambition from China and there is no reason at present why they cannot materialise. But in the short term it is doubling down on fossil fuels and the signals are not clear on how China’s commitments will evolve. The UN General Assembly in September is a moment to watch.

One uncomfortable fact remains. The global transition away from fossil fuels must encompass countries whose economies depend deeply on fossil fuel revenues – and as of now we don’t have a model for how those countries will change. In the absence of a transition plan, autocrats who see their time running out may be tempted to make dangerous and destructive gambles. The endings of authoritarian petrostates were never likely to be particularly smooth.

The faster and harder the world moves away from using fossil fuels, the better.

Andrew Norton is the director of the International Institute for Environment and Development (IIED).