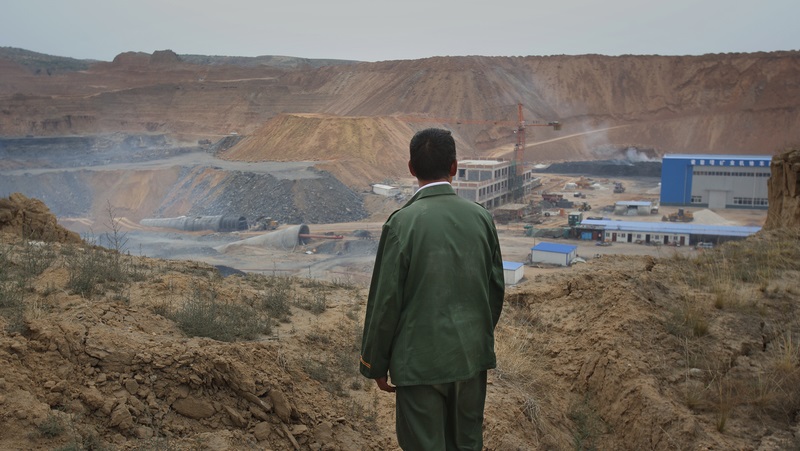 An open-pit coal mine in Yulin, China. (Photo: Qui Bo/Greenpeace)

In its energy plan for 2021-2025, China aims to increase production of oil, gas, coal, nuclear, wind and solar energy to prevent electricity blackouts and cut dependence on foreign energy suppliers.

While tackling climate change remains a goal of the Chinese government, the volatility in energy prices triggered by Russia’s invasion of Ukraine has pushed self-reliance up the agenda.

Greenpeace East Asia campaigner Li Shuo called China’s strategy an “all of the above” approach. “The short term priority is to ensure energy supply and boost growth,” he said.

“In the West, coal and renewable energy have an offsetting relationship. In China, they go hand in hand. And that’s of course not good from a climate point of view.”

Last September, the price of coal rose and Chinese power plants stopped buying as much as they needed. This led to electricity shortages. Some factories had to go without power and some cities lost their heating, lifts and traffic lights.

Centre for Research on Energy and Clean Air analyst Lauri Myllyvirta said that, since then, “ramping up coal output has been a high priority”.

In January, president Xi Jinping poured cold water on climate hopes by saying that China needed to “overcome the notion of rapid success” and that “reducing emissions is not about reducing productivity and it is not about not emitting at all either”.

The soaring price of fossil fuels in the wake of Russia’s invasion of Ukraine has increased China’s desire to produce its own energy, Myllyvirta said.

The latest five-year plan does not include a specific target for coal production, but new small coal plants and upgrades to existing coal plants are expected to play a role in adding a massive 800GW of power generation capacity.

E3G analyst Byford Tsang said the plan “does not give us any new clues as to how China intends to ‘strictly control’ (a pledge given in the earlier national policy ‘1+N’) the most emission-intensive power source – coal”.

At the same time, China wants to boost its renewables and nuclear power. By 2025, it aims to increase the proportion of non-fossil energy consumption to 20% and non-fossil power generation to 39%.

Refinitiv analyst Yan Qin said that this target was “not ambitious” and in line with existing 2030 renewable energy goals.

But Tsang said: “The plan shows that China remains committed to growing its clean energy systems. It lays out the steps required to facilitate China’s energy transition.”

It will do this largely through building “clean energy centres”, mainly in the poorer and sparsely-populated west of China.

For example, it plans to install 450 GW of renewable energy capacity in the Gobi desert. That’s more than the US’ entire wind and solar generating fleet.

The plan outlines investments in transmission lines to help carry this electricity to where it is needed and pumped storage to balance the grid.