Comment: As governments redirect emergency aid to Ukraine, they need to find additional funds for climate finance and not pitch the two crises against each other 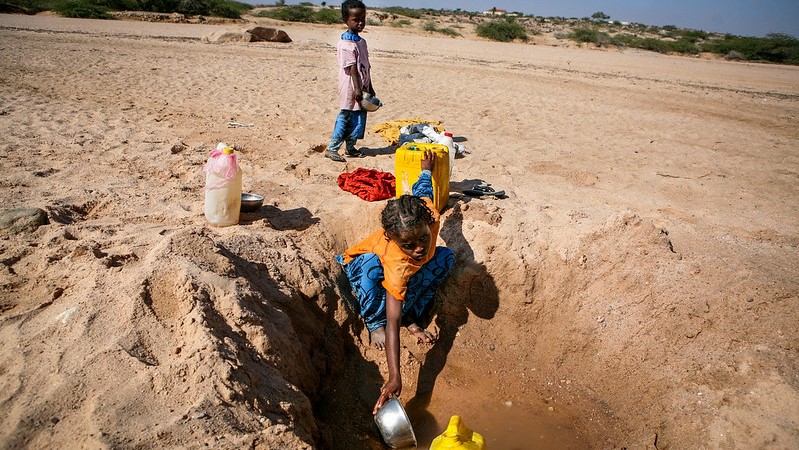 A girl fetches water by digging a hole in a dried up waterbed during a drought in Somalia (Photo: UNDP Somalia/Flickr)

A little over four months ago, ministers from developed countries attending the Cop26 UN climate summit in Glasgow promised to scale up their climate support to developing countries.

The promise was a critical part of the Glasgow Pact. But Russia’s invasion of Ukraine on 24 February shifted priorities, challenging a commitment made to the world’s most climate vulnerable nations.

The war in Ukraine is a horrifying crisis that must be addressed by the world’s most powerful nations. But its implications go far beyond the country’s border, the humanitarian crisis and millions of displaced people.

There are concerning repercussions for how the world confronts the climate crisis.

In almost all developed countries, climate finance comes out of aid budgets. If wealthy nations are to increase climate finance, more development aid will be used to support efforts to cut emissions and cope with climate impacts in developing countries.

Climate finance is now competing with much-needed relief to Ukrainian refugees and communities living under Russian shelling. If the pot of money for overseas development doesn’t grow, there will be less money available for climate finance.

Western countries, and particularly EU member states, are already revising their budgets to redirect funds to support Ukrainian refugees, reduce their dependence on Russian gas and oil, and scale up their military and defence budgets.

In a major policy shift, Germany approved a national defence fund and committed €100 billion ($110bn) in military spending. In Denmark, 11% of the national budget for overseas development assistance has turned into support for Ukrainian refugees. And in Norway, the government has decided to put development aid disbursements, including climate finance, on hold while they assess the possibility for allocating more of the money to Ukraine.

Meanwhile, the US has already fallen short on its climate finance promise. President Joe Biden committed to provide $11.4bn a year for climate finance in poor and vulnerable nations by 2024 – a considerable increase from levels under his predecessor Donald Trump but still short of the country’s fair share of $45-50bn.

Now, this just sounds like empty words. Earlier this month, Congress approved only $1bn in climate finance for 2022 while agreeing on a $13.6bn aid package to Ukraine.

The war is further compounding a rise of global food prices, which reached an all-time high in February 2022. Around a quarter of global wheat exports come from Russia and Ukraine and disruptions to the wheat trade may tip some countries into famine.

The solution must be for wealthy nations to deliver new and additional climate finance, outside of pots of money earmarked for overseas development assistance – a long-standing demand of developing countries and NGOs.

Even this may become a challenge. With Ukraine as a top priority for US and European leaders, the next round of spending plans and budgets are likely to see investments to address soaring energy prices, the halting of Russian energy imports and a boost for national defense budgets rather than climate action for the world’s poor.

That would make it more difficult for western countries to deliver on their promise of significantly scaling up climate finance and meeting and exceeding a 2009 goal to mobilise $100bn a year.

The war in Ukraine is horrific and humanitarian support to refugees and a transition away from Russian fossil fuels are necessary.

However, the climate crisis is not on hold. Promises of additional climate finance must be kept. Both because the money is urgently needed, to enable mitigation and adaptation in developing countries, and because climate finance is part of the fragile political agreement on global efforts to limit global heating.

Mattias Söderberg is the chief advisor at humanitarian NGO DanChurchAid.