Mia Mottley, prime minister of Barbados, hailed Sealy as a “true friend” and praised his commitment to the country 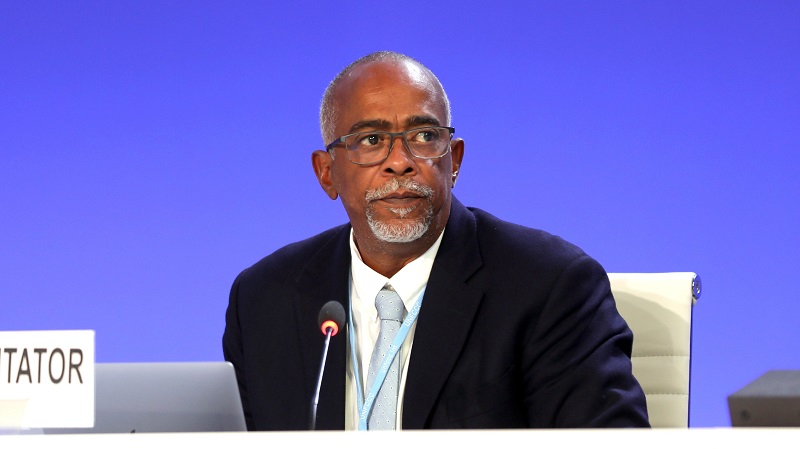 Barbados’ special envoy for climate change and carbon market expert Hugh Sealy has died suddenly at the age of 59, leaving the climate community in shock.

Tributes have poured in for the diplomat and climate consultant who has been described as “a passionate and qualified defender” of the Caribbean region and small island nations and “a true climate champion”.

Barbados prime minister Mia Mottley, who announced the news in an emotional statement published on the government’s website, said she was “in a state of shock”. No cause of death was given.

Mottley described Sealy as “a true friend and trusted advisor” that she “will miss immensely”.  The pair met in primary school in Barbados and had maintained “a very close friendship” since, she said. She appointed him special climate envoy following her landslide election victory in 2018.

“It is truly heartbreaking to think that someone with so much left to contribute to the betterment of mankind has left us so soon, but I am comforted that in just six decades on this earth he has contributed much more than his fair share,” Mottley wrote.

The islands have lost a champion. Hugh Sealy fought for #1point5tostayalive and #climateambition in the UNFCCC trenches, shaping the discussion in every room he entered. He will be missed. https://t.co/1hL30pRMOR

Born in Canada in 1962, of Bajan parents, Sealy has had a wide-ranging career spanning academia, the private sector and government, advising on climate change, energy and water resources.

After studying for a chemical engineering degree in Canada, he obtained a doctorate in environmental science from the University of Liverpool in the UK.

In the early 2000s, he established himself as a private consultant and advised governments across the Caribbean region on sustainable development issues ranging from energy and flood management to public health, waste and water resources.

In Barbados, he worked on protecting water resources and spearheaded a programme to install resilient roof tops across the island that could withstand stronger hurricanes.

From project manager he became a diplomat and served as a senior negotiator on mitigation and carbon markets for the Alliance of Small Island States (Aosis).

He taught at the St. George’s University in Grenada and in 2019, he was made lecturer on climate change and water resources management at the University of the West Indies in Barbados.

Incredibly sad to hear of the passing of Dr Hugh Sealy. It was a privilege to have his expertise and voice advocating for small islands in climate discussions, his impact and service is immeasurable. Our thoughts and prayers are with his family and country 🙏🏾 https://t.co/MLQutRQ8Vy

The climate community remembered him as a fearless defender of the priorities of small island states.

Fellow Barbadian and UN special adviser on climate action Selwin Hart said: “Hugh’s passion, commitment and dedication to Barbados the Caribbean and small island developing states was unrivaled. My friend as you Rest In Peace please be assured that we will never give up the fight you bravely fought.”

Anaitee Mills, a climate and energy expert from Jamaica, said the “entire climate change island network is in shock”.

Hugh’s passing will leave a huge gap, not just for @gisbarbados @miaamormottley or the Caribbean, but for the global climate community @UNFCCC

In the climate talks, Sealy was best known for his work to secure an agreement on establishing rules for carbon markets under the UN climate talks – discussions he co-chaired in 2017 and 2019.

He served as a board member of the UN Climate Change Clean Development Mechanism between 2009 and 2016.

More recently, Sealy co-chaired the Integrity Council for the Voluntary Carbon Market, an initiative that emerged from Mark Carney’s taskforce to scale up the market. He presented the council’s plans on the issue during a press briefing only last week.

“We have lost a great friend and colleague,” the integrity council said in a statement. “Hugh’s energy, passion and tireless dedication to improving the lives of people everywhere was an inspiration to us all and will leave an indelible mark on our hearts and minds.”

Paul Watkinson, a senior French climate diplomat, praised Sealy’s determination to get a deal on carbon markets. “Hugh Sealy was one of those people who make a real difference, who make things happen,” he tweeted.

Shocked and deeply saddened by the news of the sudden passing of Dr. Hugh Sealy, colleague and friend, staunch defender of his country, his region and the global environment. Thoughts and prayers with his family. @miaamormottley @barbados @UNFCCC https://t.co/dcMSsXltXi