The president is approving a $147 million land reclamation project on Addu atoll, despite warnings of “irreversible damage” to the environment 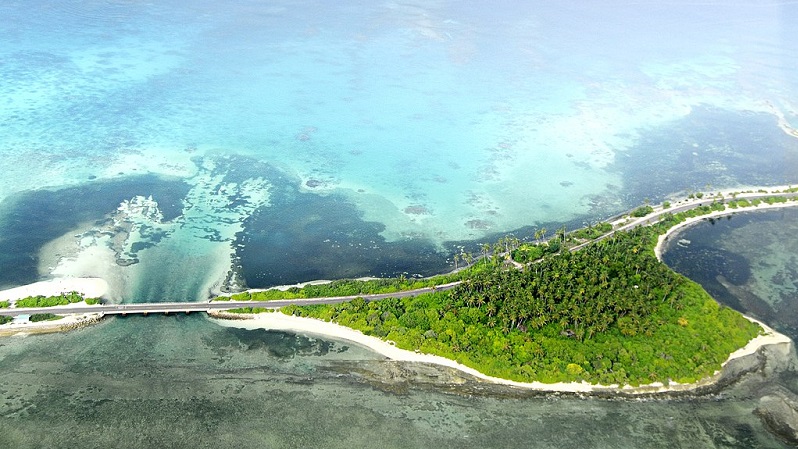 Addu is made up of thin strips of land surrounding a lagoon. (Photo: Ibrahim Asad/WikiCommons)

The president of the Maldives is set to sign off a multimillion dollar land reclamation project this weekend, despite warnings of the destruction it will wreak on coral, fish and seagrasses.

Developers plan to pump 7 million cubic metres of sand and mud from a central lagoon to build five four-star resorts and extend urban areas of Addu, the southernmost atoll of the Indian Ocean state.

Ibrahim Mohamed Solih will approve the intensive development on a visit 25-28 March, The Times of Addu reports. The project is popular with islanders hoping for jobs and better housing but comes at the cost of “significant irreversible damages” to the lagoon and surrounding reefs, according to a 751-page environmental impact assessment (EIA).

In an online meeting between environment minister Shauna Aminath and planning minister Shifaz Ali last July, minutes show that the environment ministry was “deeply concerned” about the project’s environmental impacts. But Aminath said this month in parliament that she “will not obstruct the development of Addu”. 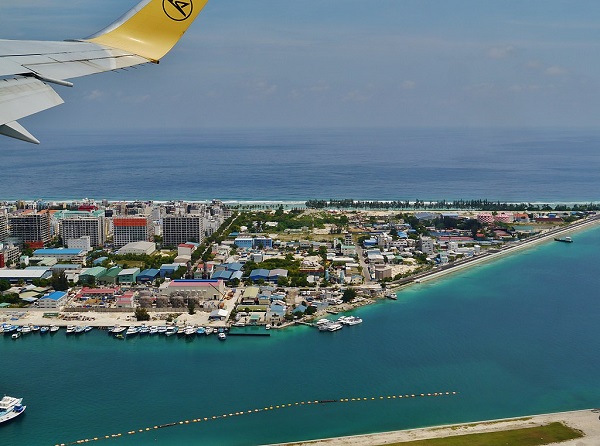 The island of Hulhumale, a suburb of the Maldives’ overcrowded capital Male and home to its main airport, is entirely artificial (Photo: Zairon/WikiCommons)

Internationally, the government is known for its forceful climate advocacy on behalf of sinking island nations. Former president Mohamed Nasheed once hosted a cabinet meeting under water to draw attention to rising sea levels and at Cop26 in Glasgow, Aminath co-chaired talks on adapting to climate change.

Humaida Abdul Ghafoor is a campaigner from Save Maldives, which opposes land reclamation. She accused the government of hypocrisy and sacrificing the environment to economic development just like the big emitters it criticises.

“A lot of international actors want to listen to the people representing the Maldives but [the government] say one thing to the international people in the English language but they speak something else at home in [the national language] Dhivehi,” she told Climate Home News. 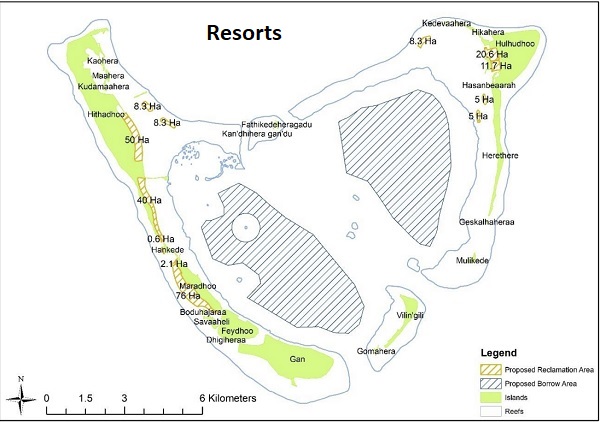 A map of Addu with existing land (green), proposed new land (yellow) and where the sand will be taken from (dark stripes). (Picture: Environmental Impact Assesment/Screenshot)

Addu is home to 20,000 people on six thin strips of land surrounding a lagoon.

The proposed development will use dredging ships to draw sand from the bottom of the lagoon and dump it in shallow water to make a solid base to build on.

This process harms plants and sea creatures both by sucking them up from the seabed and by stirring up sediment so the water becomes murky, according to the EIA. 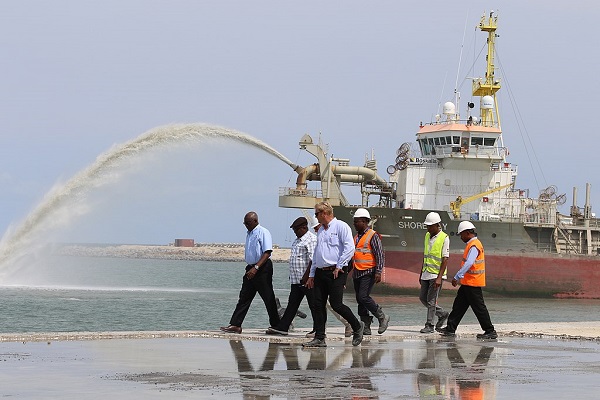 A dredging ship at work at an oil refinery in Nigeria. (Photo: GodwinPaya/Wikicommons)

Andre Droxler is environmental science professor at Rice University who has worked extensively in the Maldives. He told Climate Home: “These ships are sucking in everything… it’s huge!”

He said that corals in the Maldives and around the world were already suffering from bleaching caused by increasing water temperatures and this dredging would further damage Addu’s corals.

While most of the damage will be inside the lagoon where the dredging will take place, Droxler said it could spread to the barrier reef which surrounds Addu and helps protect it from storm surge and sea level rise.

The dredging is designed to develop Addu’s tourism industry but it could backfire. Addu has few direct international flights so most visitors take an expensive, 90-minute connecting plane from the Maldives capital Male.

One of the main reasons they do so is, according to the Lonely Planet, “some superb diving opportunities” and the chance to see corals and sharks. 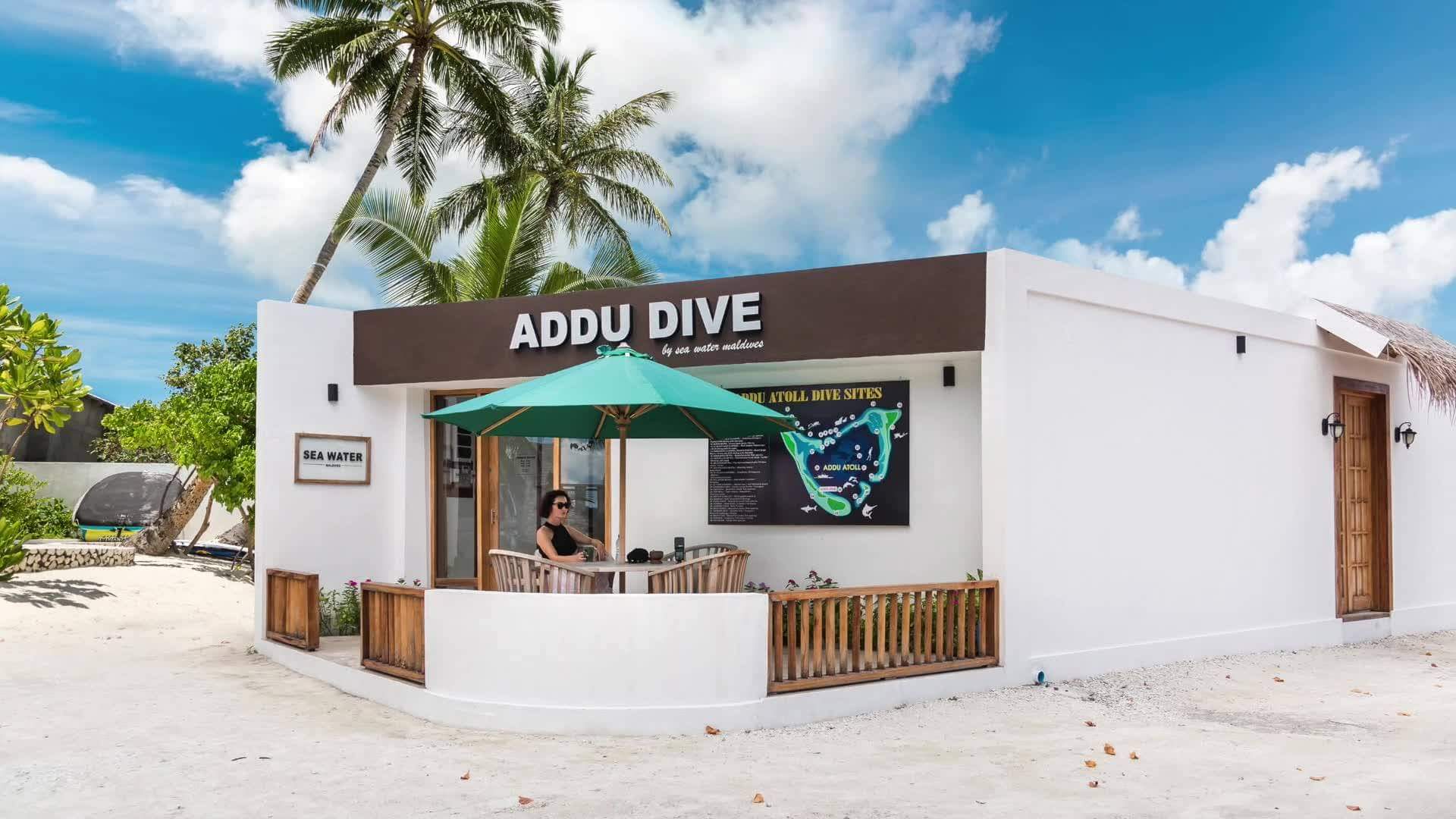 Addu Dive is one of several scuba diving centres in the area (Photo: Addu Dive/Facebook)

The EIA estimates there will be an economic loss to Addu’s diving operators and four local dive schools of $4.8-7.7 million a year if the reclamation goes ahead.

“What tourists are they hoping to bring when everything that would bring tourists to Addu is going to be destroyed – its wildlife, its marine life, its biodiversity, its diving interest?” asked campaigner Ghafoor. “The business thinking is from the time of dinosaurs.”

Other than tourism, the Maldives’ other big industry is fishing and the environment ministry expressed concerns that the project would damage bait fishing for tuna, a complaint raised at two public consultation sessions.

Despite these concerns, the EIA concluded that the project is “well received by the community” who hope it will bring economic benefits.

Abdulla, who gave only his first name, is from Addu’s capital Hithadoo, where he said most people supported the project. “Housing is a real issue in the Maldives. Two to three generations live in an average Maldives household,” he explained.

He opposes the plans and would like to see less environmentally destructive options. “Show [people] a better housing solution if not for land reclamation and they will listen to it. They’re very educated,” Abdulla said.

Respondents to the EIA’s online survey had other suggestions for how to build more homes. These included encouraging multi-storey buildings, seizing abandoned and undeveloped land and developing floating cities. 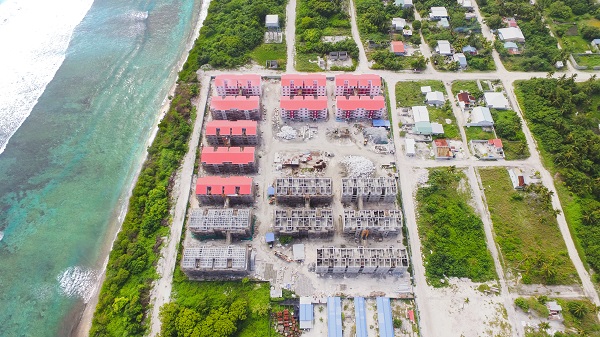 Abdul Hannan lives in the capital Male and rents out a simple three bedroom house in Addu to budget travellers for $116 a night.

He told Climate Home that the Maldives had a “dilemma” and that “though the Maldives is very threatened with climate change, average Maldivians do not seem to be bothered”.

He said: “While reclamation – if not careful – might cause environmental problems, I suppose Addu people would be hoping to benefit from the reclaimed land rather than thinking about resulting environmental damages”.

“People will be expecting land plots to build houses or government-built flats. Businessmen will be hoping to get land plots for warehouses, storage places and plots for shops etc,” he added. 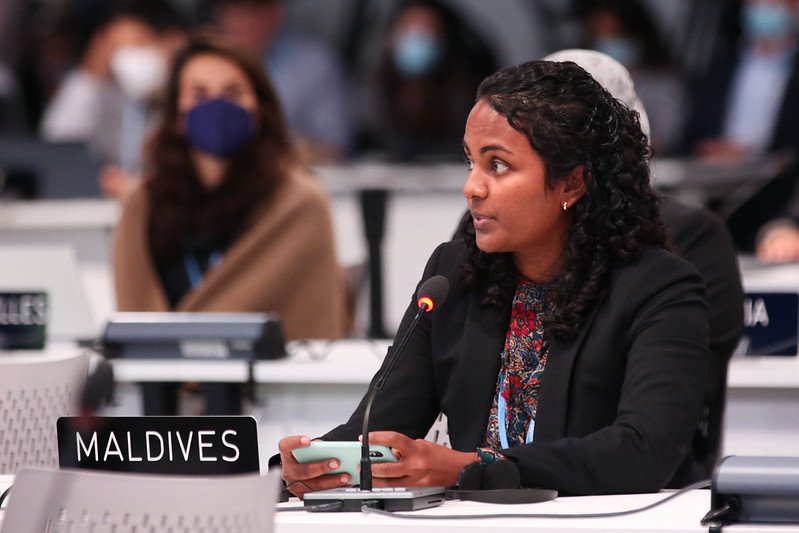 An Indian company, Afcons Infrastructure Limited, won a contract worth a reported $147 million for the work, backed by India’s export credit agency.

The Maldives is heavily in debt. When tourism collapsed in 2020, its debt to national income ratio nearly doubled to 97%.

Nasheed has called for debt restructuring so that the Maldives can invest in adapting to rising sea levels.

Ghafoor disagreed. “Nobody owes us funding in that regard because the Maldives is destroying itself. It is self-harming”, she said.

Nasheed, who founded an NGO called the Maldives Coral Institute, has not spoken out against the project. Nasheed is from the governing party and did not respond to two requests for comment from Climate Home.

“He is a politician. He has been instrumental in doing many of these things himself during his presidency,” Ghafoor said.

Campaigners are taking the government to court, arguing that the project is a violation of the 2008 constitution and its duty for the state to promote “ecologically balanced sustainable development” and “prevent pollution, the extinction of any species and ecological degradation”.

But Ghafoor does not have much more faith in the judiciary than in the government. “We are not relying on that at the moment because the court is not a really good place,” she said.

Controversies around reclamation are not specific to the Maldives or even to modern times. Young Rae Choi researches reclamation projects at Florida International University and said they have been happening for centuries in places like the Netherlands, Manhattan and San Francisco Bay.

Recently though, they have become more common and are particularly popular in East Asia and the Arabian Gulf. Globally, tourism is a relatively minor driver of reclamation compared to ports, airports, industry and luxury housing. Perhaps the most striking example of “prestige reclamation” is the Palm Jumeirah resort in Dubai.

She said that bringing sand in from outside of the atoll would be less environmentally damaging but also more expensive and “probably not economically feasible”. 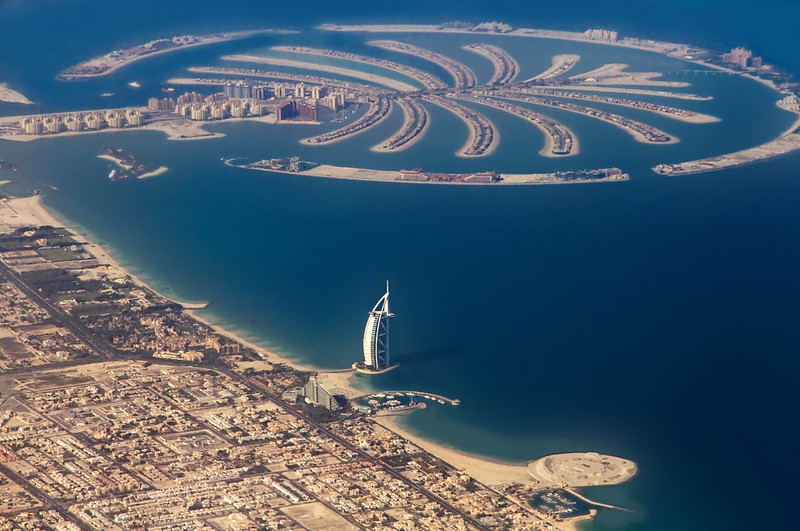 Dubai’s Palm Jumeirah is made up of artificial islands for luxury property (Photo: Jason Mrachina/Flickr)

Ajwad Mustafha is the environment ministry’s permanent secretary. He told Climate Home: “The main reason for the project is to create space to facilitate the development of Addu City, where there is currently no available land for additional housing and economic infrastructure…

“It is fully understood that a project of this magnitude will have significant environmental impacts, especially in an atoll like Addu,” he said. The Environmental Protection Agency is reviewing the EIA and may attach conditions to the development.

“Therefore, the proposed methodology, environmental impacts and the mitigations measures suggested in the EIA may change. So, it is bit early for us to say what the actual impact would be at this stage, since this is an ongoing process.”

He said that, as well as reclamation, the project includes coastal protection and construction of flood (stormwater) mitigation system between the island and newly reclaimed land.