China, India and Canada made the grade to showcase their climate ambition on the anniversary of the Paris Agreement. Australia, Brazil and South Africa did not 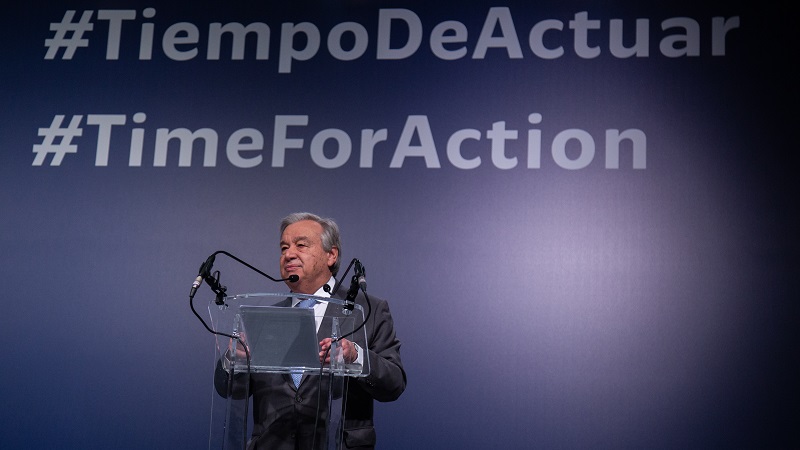 Xi Jinping, Narendra Modi and Justin Trudeau are among 76 heads of state that will present new and improved climate commitments at a virtual summit on Saturday.

The event co-hosted by the UN, UK and France marks the fifth anniversary of the Paris Agreement and is a moment for countries to present stronger 2030 climate plans, long-term decarbonisation strategies, post-2020 climate finance and adaptation programmes.

Organisers stressed that only national leaders with the boldest plans made during the course of the year would be given a platform. Their pre-recorded video messages of up to two minutes will be interspersed with statements from business and civil society groups.

Around 30 leaders are expected to make net zero announcements and about 50 are tipped to present enhanced 2030 climate contributions to the Paris Agreement – also known as nationally determined contributions (NDCs). Pope Francis will bring a faith-based perspective.

The list of participants was still being finalised on Thursday afternoon, after last-minute negotiations over the level of ambition they could bring.

Speaking to reporters on Wednesday, Archie Young, the UK’s lead climate negotiator, described “difficult and detailed conversations” with countries during the selection process.

“We want this summit to be focusing on the positive rather than focusing on who might not be present because I think it’s a huge opportunity for the world to come forward and see that countries from across the spectrum are committed to further ambition,” he said.

It comes at the end of a week of reality check on the state of the climate.

A major report by UN Environment Programme found that despite a 7% fall in emissions this year because of Covid-19 restrictions, the emissions gap to meet the Paris Agreement goal of limiting warming “well below 2” and strive for 1.5C continues to grow.

Countries would need to collectively increase their pace of emissions reduction this decade threefold to get on track to meet the 2C goal and more than fivefold for 1.5C, the report found. Current 2030 targets will lead to an estimated 3.2C of warming.

“If we postpone any climate action further it will become impossible to limit global warming to 1.5C,” said Anne Olhoff, head of climate policy and planning at UNEP DTU Partnership.

Here is a rundown of who has made the cut — and who hasn’t.

Xi Jinping surprised the world at the UN in September when he announced China would aim to achieve net zero emissions by 2060. That alone would likely have qualified Beijing for a place at the summit.

But plenty of questions remain on whether China will accelerate emissions cuts in the short term. Chinese sources say Beijing is on track to submit its 2030 NDC to the UN before the end of year and some details could be revealed at the summit.

Observers and campaigners want to see Xi promise to peak emissions much earlier than 2030, and closer to 2025, and set out a clear pathway for curbing coal production.

European Commission president Ursula Von der Leyen will announce the union’s new target to cut net emissions by at least 55% between 1990 and 2030 — up from 40% currently. She is expected to make a live intervention. European leaders approved the deeper cuts at a Council meeting on Friday morning after marathon talks through the night.

India has made no major announcements on climate action this year, so premier Narendra Modi had better have a surprise up his sleeve.

The UK Cop26 hosts have worked with Indian officials in recent months and both co-organisers UK prime minister Boris Johnson and French president Emmanuel Macron have spoken to Modi about climate action in recent weeks.

In the absence of a new emissions target, India could present sectoral policies to cut emissions and adapt to climate impacts. It recently created a committee to manage the delivery of the Paris Agreement.

Boris Johnson will reiterate a government decision last week to cut emissions 68% from 1990 level by 2030. It is the UK’s first solo contribution to the Paris Agreement after leaving the EU, based on independent advice to get on track for net zero emissions by 2050.

As host to next year’s Cop26 climate talks in Glasgow, the government sought to galvanise greater ambition by announcing its own enhanced climate plan ahead of the summit. However its decision to cut overseas development aid last month went down badly with the poorest countries.

Last month, Justin Trudeau’s government presented a bill to parliament to enshrine a 2050 net zero emissions goal into law and set five-yearly carbon targets from 2030 to 2050.

But the bill made no mention of increasing Canada’s 2030 target to cut emissions by 30% from 2005 levels, which despite a dip in emissions caused by the coronavirus pandemic, the government may not be on track to meet, according to Climate Action Tracker.

Prime minister Yoshihide Suga announced plans for Japan to achieve carbon neutrality by 2050 in October. In a speech to lawmakers, he promised to “fundamentally shift” the country’s coal policy but how this translates into action is yet to be seen.

In March, Japan reaffirmed its existing 2030 target of cutting emissions 26% by 2030 from 2013 levels without an enhancement. A revision of the country’s energy plan is expected to lead to an updated NDC in 2021 and ahead of Cop26.

The government committed earlier this year to meet carbon neutrality by 2050. Like Japan, South Korea is under pressure to fully end the financing of coal projects abroad.

Due to be the host of last year’s UN climate summit, Chile was aiming to come out with its enhanced NDC at the event. Major protests at home forced them to move the COP to Madrid at the last minute and delay the national plan. It was presented instead by videolink in March 2020, promising to peaking emissions by 2025.

President Iván Duque announced at the end of November a 2030 climate plan to cut emissions 51% compared with business as usual by 2030 – a significant jump from the previous 20% target. A further nine Latin American countries made the cut including Argentina, Costa Rica, Ecuador, Peru, Uruguay and Suriname.

Nine African heads of state are due to take part in the summit. This includes Rwanda, which was the first African nation to submit a tougher climate plan to the UN in May.

The Democratic Republic of Congo, Ethiopia, Gabon, Kenya, Malawi, Niger, Nigeria and Zimbabwe are listed to talk at the event.

Jamaica was the first Caribbean nation to increase the scale and scope of its emissions cuts in June.

Their speeches will highlight how extreme weather and rising seas are already costing lives and livelihoods.

Prime Minister Scott Morrison has been widely reported to be about to announce that Australia will not use carry-over credits from the Kyoto-era to meet its 2030 target. Australia was the only country in the world to have proposed using credits from the previous climate regime to meet their commitments under Paris.

Last month, Morrison told the Business Council of Australia: “My government’s ambition is that we will not need them. And we are working to this as our goal, consistent with our record of over delivering in these areas. And I am confident that our policies will get this job done… Now, I hope to have more to say about this before the end of the year.”

But abandoning carbon accounting tricks is the minimum for Australia to fulfill its existing climate pledges and does not represent a step up in ambition.

Earlier this year, president Vladimir Putin signed an executive order to reduce emissions by 30% from 1990 levels by 2030. That is the more ambitious end of its previous target to cut reduce emissions 25-30% by 2030.

The updated target still allows emissions to rise significantly, as Russia’s emissions remain at about half the level they were in 1990 before the collapse of the Soviet Union.

Climate Action Tracker ranks the target as “critically insufficient” to meet the Paris goal and consistent with a pathway towards 4C of warming by the end of the century. The move was not considered “bold” enough to make the cut.

Environment minister Ricardo Salles announced this week that Brazil was seeking to join the net zero club, aiming to achieve carbon neutrality by 2060. This was an “indicative” target in its updated NDC submitted this week, while the 2030 goal was unchanged.

Campaigners slammed the net zero goal as meaningless without nearer-term action and a distraction from president Jair Bolsonaro’s destruction of the Amazon rainforest, which has surged to a 12-year high.

In September, the government approved a goal to reduce greenhouse gas emissions to net zero by 2050. But that was not reflected in the detail of the plan, which forecast 5,000 MW of coal power capacity would still be operating in 2050.

Progress would be a coherent plan to phase out coal, with support for workers in the transition.

In April, the government reaffirmed its existing climate plan to cut emissions by 30% below 2005 levels by 2030. In its submission to the UN, it said it was waiting for recommendations from its independent Climate Change Commission in early 2021 on how to align its current 2030 plan with its carbon neutrality commitments and the 1.5C temperature goal of the Paris Agreement.

At the start of December, the parliament declared “a climate emergency” and prime minister Jacinda Ardern committed to make all government department and institutions carbon neutral by 2025. Amping up the rhetoric was not enough to overcome the timetabling slip.

Middle eastern petrostates do not typically present themselves as climate leaders, so it is no great surprise that Arabian Gulf countries are not listed.

However, it underscores a disconnect between increasingly ambitious carbon-cutting goals elsewhere and continued government plans to expand fossil fuel production.

President-elect Joe Biden made climate action central to his election campaign, but is prohibited from speaking on the world stage before inauguration.

The lame duck in the White House, Donald Trump, showed his contempt for international climate cooperation by pulling out of the Paris Agreement.

Instead, the governors of Massachusetts and Michigan, and mayor of Los Angeles will represent the “we’re still in” camp in the slots reserved for civil society.