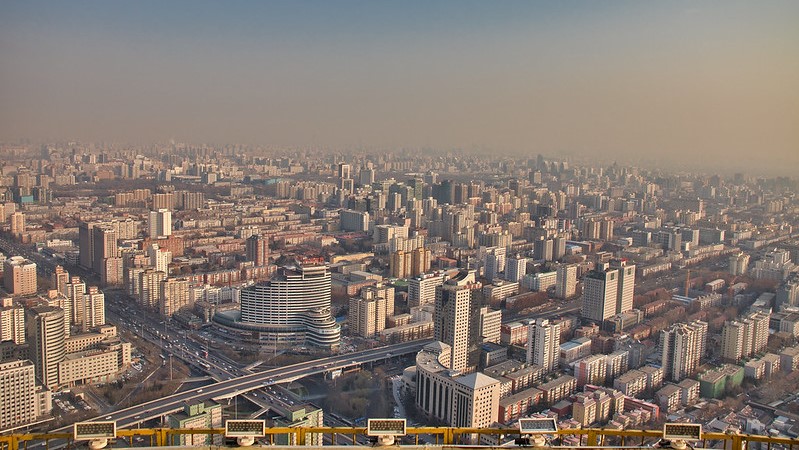 View of Beijing from the central TV and radio tower (Photo: Eric Jiang/Flickr)

China is on track to submit an updated 2030 climate plan to the UN before the end of the year, experts have told Climate Home News, with its ambition hinging on the trajectory for coal power.

The world’s largest emitter is reviewing a proposal for enhancing its 2030 climate plan – also known as a nationally determined contribution (NDC) – ahead of a UN deadline for countries to present new or improved plans.

President Xi Jinping took the world by surprise in September by announcing China would aim to achieve carbon neutrality by 2060 and peak its emissions before 2030.

Speaking at a BRICS summit alongside Brazil, Russia, India and South Africa this week, Xi said: “Recently, I announced at the UN China’s initiative to scale up its nationally determined contribution…. You can count on China to keep its promise.

“To tackle climate change, we must never relax our efforts. We must implement the Paris Agreement in good faith, stick to the principle of common but differentiated responsibilities and provide more help to developing countries.”

“There is a strong likelihood that China will present [its NDC] by the end of the year,” Li Shuo, senior climate and energy officer at Greenpeace East Asia, told Climate Home News, adding that the timing of the announcement and level of ambition remained uncertain.

To drive momentum ahead of the Cop26 climate talks in November 2021, countries have been invited to present “bold” climate plans at a summit co-hosted by the UN, the UK and France to mark the fifth anniversary of the Paris Agreement on 12 December.

Only leaders that can demonstrate new commitments to cut emissions and prepare for intensifying climate impacts will be allowed a platform. The UK Cop26 presidency has also called for donor countries to come with new finance pledges.

China’s climate neutrality announcement alone would meet the threshold for President Xi to take one of a dozen two-minute slots for leaders to showcase their ambition.

To match its long-term ambition for carbon neutrality, Beijing should announce a 2030 plan that steps up action in the near term and peaks emissions closer to 2025, Li said.

“For President’s Xi recent [carbon neutrality] announcement to be seen credibly, China must also do more in the short term,” said Kevin Rudd, president of the Asia Society Policy Institute. “Next month’s anniversary summit for the Paris Agreement provides an opportunity for Beijing to further clarify its position.”

Peaking emissions by 2025 and rapidly reducing them thereafter would put China on a decarbonisation pathway compatible with the 1.5C goal of Paris Agreement, according to analysis by the Asia Society Policy Institute and Climate Analytics published earlier this week.

This would imply phasing out coal-fired power entirely by 2040 and strengthening a number of components in China’s 2030 climate plan, including its carbon intensity target.

China is already on track to overachieve its current target and peak emissions before 2030. A study in the journal Nature Communications found that China could probably peak its emissions in 2026 based on existing policies.

The NDC is being developed in tandem with the next five-year plan, which determines the direction of China’s economic development to 2025.

A study co-published by Draworld, an independent energy research organisation and the Centre for Research on Energy and Clean Air on Friday, found that to align its policy with its long-term carbon neutrality goal, China needs to stop building new coal-fired power plants after 2020.

Instead, the rate of wind and solar power expansion should at least double to more than 100GW annually in the next 10 years. The power sector, the country’s largest source of CO2 emissions, will need need to achieve net zero emissions by 2050.

Many provincial governments are backing new coal plants to create construction jobs, even in places where there is excess power capacity on the network.

The report found that around 130GW of China’s total 1,000GW coal-fired capacity is redundant, yet power industry players are calling for at least 300GW of additional coal capacity to come online by 2030.

Zhang Shuwei, lead author and chief economist of the Draworld Environment Research Center, said the proposed expansion of the coal sector, which is “riddled with overcapacity and low returns on assets” will result in more than $300 billion of stranded assets.

The medium-term expansion of the coal power sector threatens China’s ability to ensure a managed decline of coal and a transition to renewable and would require “a cliff fall of coal power generation after 2030,”  Zhang said.