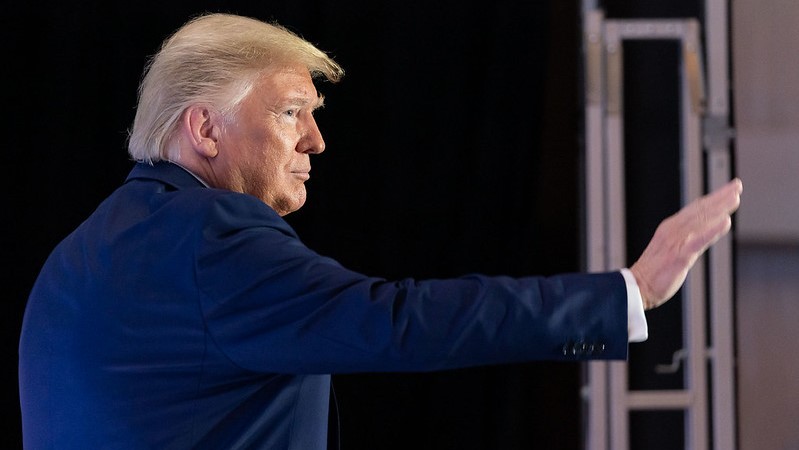 Some countries may be tempted to wait for the results of the US election, les than a week before Cop26, before deciding to boost their climate action plans this year. (Photo: Tia Dufour/White House/Flickr)

Climate diplomacy is all about timing, and this year, it’s particularly true.

Science, many people and the UN are demanding countries toughen their climate plans this year, and before the start of critical climate talks in Glasgow in November.

Under the Paris Agreement, countries have agreed to increase their climate plans to limit warming “well below 2C”. Pledges are currently on track for more than 3C of warming by 2100.

But the Paris accord’s bottom-up approach is also based on voluntary commitments. That means that what big emitters do and don’t do this year could shape the world’s response to the climate crisis.

Like dominos, one event could trigger a wave of commitments for greater action, building momentum ahead of Cop26 in Glasgow. But the reverse is also true, and missed opportunities could stall the diplomacy machine.

Ambiguities in the legal decision text of the Paris Agreement do not help this.

Formally, countries are expected to submit new or updated climate plans “by 2020” – not “by Cop26”. That could mean by 31 December, although Cop26 is widely considered to be the deadline. At this stage, it is also unclear whether the coronavirus outbreak will have an impact on the timetable.

The UN admitted it anticipated some countries to submit their plans “in the last quarter of the year”. And there is a squeeze for major emitters – an exceptional EU-China summit will see Chinese president Xi Jinping come to Germany in September, and American voters go to the polls on 3 November.

Either event could trigger a domino effect.

The US will leave the Paris Agreement on 4 November but Democrats have pledged to rejoin immediately if they defeat President Donald Trump. The world is watching the world’s largest economy’s next move.

Will other big players wait for the US election results before their decide whether to boost their climate  plans? It’s a possibility that most hope won’t happen.

This week, Moldova was the fourth country to formally confirm to UN it would enhance its 2030 climate plan, committing to cut emissions 70% from 1990 levels by 2030.

Who will be next… and when?

This year’s timetable is also giving Brussels a headache.

As part of its climate law, the EU Commission said it would present plans for a new 2030 target by September – too late in the year for member states to approve it in time for Cop26.

That is the warning of 12 European ministers, who have called on the Commission to get a plan ready by June, latest.

An accelerated timetable could allow the EU to inject momentum into the lingering climate diplomacy process at the EU-China summit in September.

For the slow-moving and process-ridden EU machine, this is no small feat.

Elsewhere, the EU Council has adopted the bloc’s 2050 climate neutrality goal to be submitted to the UN.

In the Amazon forest in Western Brazil, rubber tappers are burning down trees to clear land to breed cattle.

President Jair Bolsonaro’s election and his promise to shave off environmental regulation has emboldened the advance of cattle grazing into protected areas.

In a powerful and compelling story, Fabiano Maisonnave reports from the Chico Mendes Extractive Reserve, originally meant as haven for the sustainable use of the forest.

Australia has long come under the wrath of the international community for planning to use old Kyoto-era carbon credits to meet its commitments under the Paris Agreement.

Now, nine leading legal experts have written to Prime Minister Scott Morrison warning him doing so has no basis in international law.

They’ve invited him to review his position. Read the letter in full here.

Gabon will be playing a key role this year as it chairs the African Group of Negotiator.

Writing for Climate Home News, chair Tanguy Gahouma-Bekale, urged developed countries to take the lead on ambition ahead of Cop26 and deliver the finance vulnerable countries need to decarbonise while growing their economies.