The second death of Chico Mendes

This year, the family of retired rubber tapper Francisco Diogo da Silva, 72, burnt down a valuable grove of Brazil nut trees in a protected region of the Amazon forest to make way for pasture and cows.

“They think there’s more of a future in raising cattle,” Silva said of the family’s decision in an interview in his wooden home in the Chico Mendes Extractive Reserve, originally meant as a haven for sustainable use of the forest in Western Brazil.

“If they can sell one or two heads of cattle a month, it’s enough for food and medicine,” he said.

“I feel bad about it. I grew up in the forest. But what can we do? When you leave the reserve, all you see are fields. There is no more forest the way it used to be.” 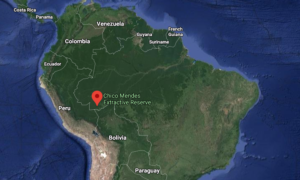 Born in a forest rubber tree grove, or seringal, that is now part of the reserve, known in Portuguese as a Reserva Extrativista, or Resex, Silva began harvesting natural rubber at the age of eight, following in his father’s footsteps.

He spent 58 years harvesting rubber, mostly in the Albracia seringal, where he now lives.

His family went ahead with clearing the Brazil nut grove even though the majestic trees are protected by law and are worth more than rubber trees. Sales of Brazil nuts get a guaranteed income.

And this reserve was created in 1990 to fight against such land clearances, a little over a year after the assassination of the man who gave it its name, Chico Mendes. His murder was ordered by a cattle rancher.

Mendes, a rubber tapper, environmentalist and trade unionist, sought to protect the Amazon while allowing sustainable use of forest resources.

The conversion of the Amazon forest in Brazil into pasturelands gained momentum in 2019, in the wake of the 2018 election of populist President Jair Bolsonaro, who promised to shave away environmental protections in favour of cattle ranching. 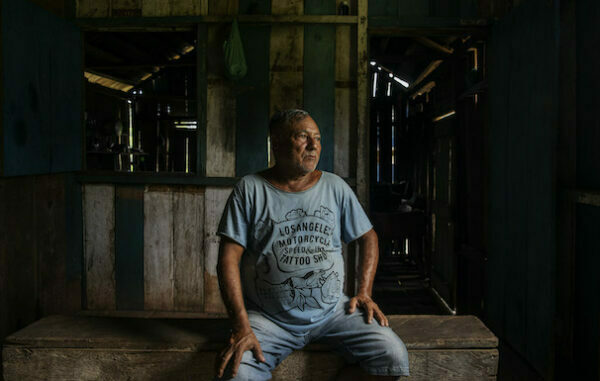 Since its creation 30 years ago, the Chico Mendes reserve has already lost 7.5% of its forested area, and 2019 was the worst year ever. Deforestation in the Amazon is stoking climate change by releasing vast amounts of carbon dioxide to the atmosphere and threatening biodiversity.

Silva says that none of his 10 children work the rubber trees. Five of them are on the “street,” in other words, they live in town. The remaining ones live with Silva and breed cattle.

“There’s only one buyer for rubber. You would need to have a guaranteed market” to ensure better income from rubber, he said, in his sparsely furnished home to which electricity had been connected just a month earlier.

When Silva was born in the late 1940s, it was the time “of the bosses”, when rubber tappers, living in isolation in the forest, were subjected to working conditions akin to slavery by the owners of the rubber groves.

They piled up unpayable debts and were forbidden to plant vegetables for their own subsistence. Unlike his children, Silva never went to school. “I can’t write or read my own name.”

When the Extractive Reserve was established, the rubber tappers’ families were free of the bosses once and for all, and, most importantly, acquired legal protection against the cattle ranchers who were making inroads in the forest.

Schools multiplied, and electric lighting arrived through the electric grid or solar panels.

Another significant improvement was the building of so-called lines (dirt roads), improving access to the towns. Getting to Xapuri in a cart pulled by oxen used to take Silva around 14 hours. Now he only takes an hour and a half by car or on his sons’ motorbike.

From the environmental viewpoint, the Extractive Reserve has been holding back the spread of the so-called “deforestation arch”, the frontline of destruction of the Amazon rainforest that stretches from Acre to Maranhão. Along both sides of the road connecting Rio Branco to Xapuri, almost all the forest has given way to pasture.

His family stopped harvesting rubber six years ago. He says that sales were uncertain and only took place two months per year, at most. Very often the latex they had harvested went to waste.

And farming doesn’t provide an income either, he says.

“The town folk are more interested in produce that is sold in plastic wraps, that’s high quality. They say that our produce isn’t good. You take along 500 kilos of cassava flour and spend the entire week struggling to sell it. The other stuff comes wrapped in plastic. All the guy has to do is put it on the shelves. There’s no need to buy the materials and bag it all.”

Over time, Silva and many other families came to see cattle ranching as a more feasible economic alternative, despite it being illegal on such a wide scale. 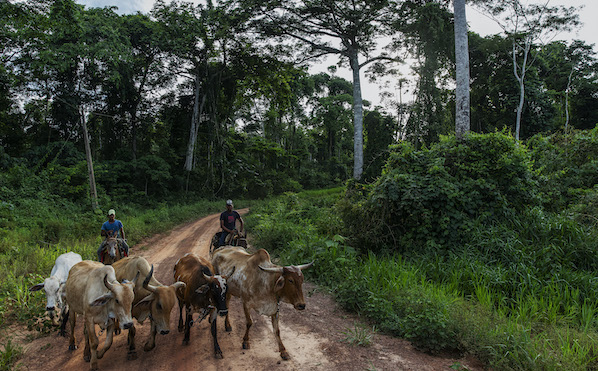 XAPURI, BRAZIL. 26/11/2019. Residents of the Chico Mendes Extractive Reserve in Xapuri, lead cattle along a road in the Albracia seringa.

Of every family plot, known as a “colocação” covering, according to the official rules, at least 400 hectares, the law is that only 30 hectares may be cut down, and only half of that may be used for raising cattle. Any forest clearance requires permission from ICMBio, responsible for managing the Resex.

In his book “Rainforest Cowboys”, published in 2015, American anthropologist Jeffrey Hoelle highlighted the growth of illegal cattle ranching as a result of the end of rubber and agricultural incentives. Meanwhile, cattle ranching is seen by rubber tappers as the best alternative, providing savings and easily convertible into cash.

Silva said President Bolsonaro’s speeches, and the encouragement provided by a town councillor from Xapuri, gave the go-ahead for the advance of the cattle grazing areas.

“Bolsonaro said that men who live on the land and people of good faith were allowed to use their land. We got excited,” he recalls. “He said poor people could work however they wanted. They needn’t be afraid, they wouldn’t be punished.”

In the second round of the presidential election, in 2018, the state of Acre gave Bolsonaro his greatest level of proportional voter support: 77% of the valid votes. Bolsonaro won with 59% of the vote in Xapuri, where Chico Mendes, the historic leader of the Workers Party in the state, was assassinated.

Over the first year of Bolsonaro’s administration, deforestation in the Chico Mendes Reserve increased by 203% compared to 2018. The area of forest that has been lost comes to 74.5 square kilometres, the largest in the historic series of the Prodes (INPE) monitoring system, started in 2008.

The lost area equals almost twice the area of Tijuca National Park, in the state of Rio de Janeiro – or an area bigger than Manhattan in New York.

The signs coming from the Bolsonaro administration are that there will be no more incentives for traditional extractive practices.

In an article published in November, environment minister Ricardo Salles compared rubber tappers to “human guinea pigs”. And federal deputy Mara Rocha (PSDB-Acre) has submitted a bill removing from the Extractive Reserve the part already taken over by cattle.

But deforestation has not yet been officially authorised.

Under pressure at home and abroad due to the wave of destruction, including a spate of fires in 2019, the Bolsonaro government has increased inspections.

Silva says that in October three of his sons were slapped with environmental fines of close to R$880,000, or about $200,000, including one imposed for cutting down 200 hectares of forest. He says the family has no way of paying them.

“What am I going to do? I’m going to cringe. I’m not the authorities. All I could do was listen and beg God to make them open their hearts and at least allow us to remain on the reserve,” he said, referring to the possibility of the family being expelled from the Resex.

In stark contrast, a neighbour of Francisco da Silva, Luzineide Marques da Silva, 41, is one of the few people who still harvests the rubber trees in Albracia. Francisco and Luzineide, who share one of Brazil’s most common surnames, are not related.

For the last two years, her production has been bought by the shoe company Veja, which has French capital and encourages sustainable practices. The rubber is taken to Rio Grande do Sul, where the shoe factory is located. 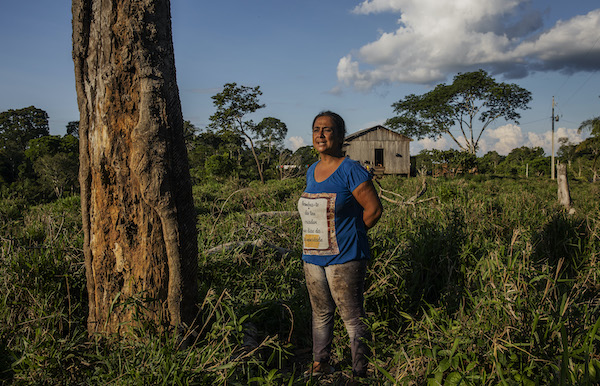 “Sales of rubber are very good right now. There was a point when I was selling for R$1 per kilo. Now the price is R$13.50. The company pays R$8 and the other R$5.50 comes from subsidies,” says Luzineide, who also harvests Brazil nuts from December to February, alongside tending a vegetable garden and a few cows, within the legally permitted limits.

Luzineide says her family was facing hard times before the Veja shoe company turned up.

“We were going without some things in the summer. The thing is, we produce milk, rice, beans, we plant maize to feed our hens, but we have to buy sugar, salt, soap, cooking oil, these other things, you know? We need medicine too, we have to keep our children in school. Those are the main expenses.”

At the moment, she says, “we have enough to live on. We don’t go hungry.”

“In August, when the trees give less latex, we begin facing hardship if it’s a year when we didn’t plant any vegetables. In the years when we do have our vegetables, we can eat well and live as normal.”

Luzineide lives on her colocação with her husband – whom she taught to harvest rubber – three daughters, a brother-in-law and five grandchildren. She was born on the Resex and, as the eldest child, was taught the work by her father. The family lives in two wooden cabins, not too different from those of their neighbour Francisco.

Luzineide says the need to share the land among her children is no excuse for deforesting, pointing to the indigenous peoples in the Amazon as an example of sustainable use of the forest.

“Last year we had one hectare planted with rice, there were ten of us and we didn’t manage to harvest it all in 20 days. We lost 6,000 kilos. That goes to show there’s no need to cut down a lot of trees.”

“There’s no need for every one of my daughters to have her own vegetable plot, as we wouldn’t manage to sow, weed and harvest everything. The Indians are an example: they have one area only for vegetables and it feeds everyone.” 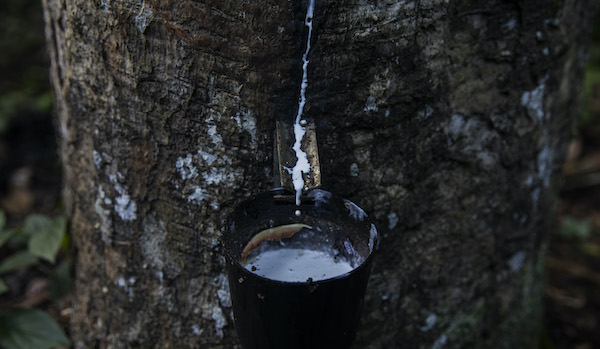 Despite being satisfied with the size of her planted area and with the price of rubber, Luzineide says most rubber tappers don’t see things her way and are opting for cattle ranching.

Of the 35 colocações in her region, she says, rubber is still harvested in only three. With the recent wave of deforestation, her colocação is being turned into an island of forest surrounded by pastureland.

“This is the greatest crime that has happened on the face of the Earth,” says Luzineide about the inroads of pasturelands into the rubber groves and the illegal land sales.

“If the Resex goes on as it is right now, soon there will be nothing left. Only the traditional families, those that have never sold an inch of land, who have never wanted to raise cattle, are going to maintain their forest standing. They may even be killed, because they’ll be invaded.” 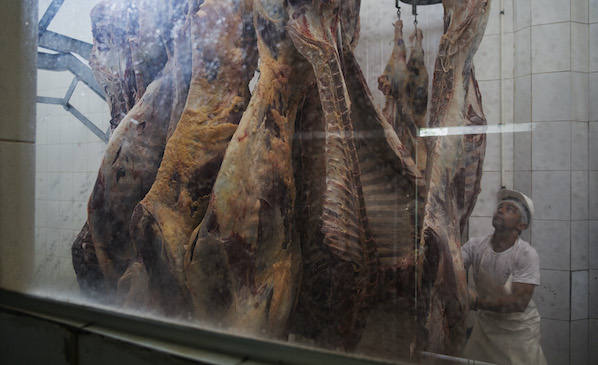 On this point, at least, Francisco is in agreement with his neighbour: the future looks bleak.

“It’s twice as hot as it used to be. It used to be so good. There were times when you could have eight days of cool weather without seeing the sun. But now, you may have one cloudy day, maybe two, but then the baking sun comes out again,” he said.

“No one can stand it. The day labourers almost pass out. Some say it’s because the forest has been cut down. Others think Doomsday is coming.”

All photos: Lalo de Almeida/FolhapressSilva. Translated from the Portuguese by Clara Allain