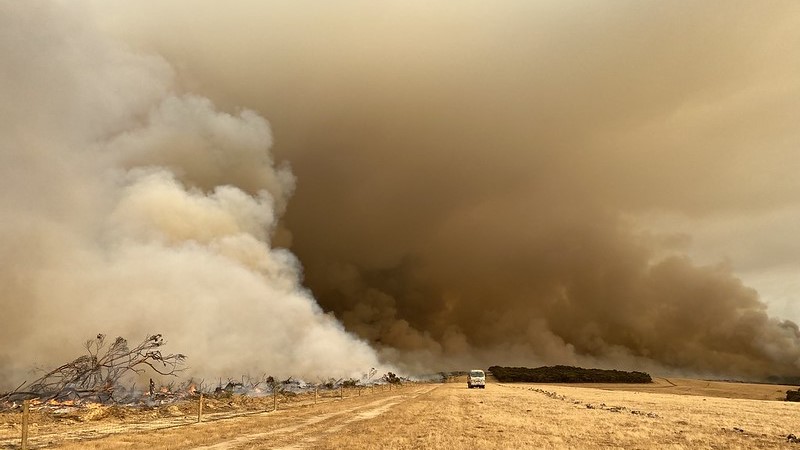 A fire on Kangaroo Island in southern Australia in January 2020. (Photo: Robdownunder/Flickr)

Australia’s plan to use Kyoto-era carbon credits to meet its commitments under the Paris Agreement is inconsistent with international law, legal experts have warned.

In a letter to Australian Prime Minister Scott Morrison, nine international and climate law professors said Australia’s method would set “a dangerous precedent” for other countries to “exploit loopholes or reserve their right not to comply with the Paris Agreement”.

“Our considered view is that the proposed use of these ‘Kyoto credits’ to meet targets under the Paris Agreement is legally baseless at international law,” the letter read.

Australia is one of the only countries in the world to have explicitly said it would carry over Kyoto-era carbon credits as a means to meet its 2030 climate target.

The credits were initially issued for Australia’s overachievement in meeting its 1997 Kyoto pledge to curb emissions by 2012.

Morrison told the UN in September 2019 that “Australia will meet our Paris commitments”, and called the goals “a credible, fair, responsible and achievable contribution to global climate change action.”

But a 2019 UN Environment report listed Australia among a group of 20 nations requiring “further action” to meet its Paris target, along with Brazil, Canada, Japan, South Korea, South Africa and the United States.

Using the credits to meet its commitments under the Paris deal would effectively lower the emissions reductions needed for Australia to achieve its 2030 goal.

The professors, all from Australian universities, argued the Kyoto Protocol and the Paris Agreement are “entirely separate treaties”. As such, they said Kyoto credits could only be used to meet Paris accord goals if that was decided and agreed by every party to the agreement.

“It is clear that no such consensus exists,” the letter added.

The experts also noted that the first commitment period of the Kyoto Protocol expired in 2012.

The Doha Amendment which created the second commitment phase due to run from 2013 to 2020 has not been ratified by enough countries to come into force and this may not happen before the end of the year. Australia is among nations that have ratified the Doha amendment.

But the legal scholars said the lack of formal entry into force means that credits that would have been issued for complying with 2020 targets under the Kyoto Protocol may never materialise, potentially only giving Australia two thirds of the 411 megatonnes of CO2 equivalent the government estimated being due.

Under the Kyoto Protocol, countries also agreed to “cancel” any units that remain unused after countries met their targets under the second commitment phase.

The use of old Kyoto credits “conveys a message to the world that Australia wishes to reserve the right to avoid a significant proportion of the mitigation effort needed to meet its 2030 target under the Paris Agreement,” the letter said.

If other countries were to follow Australia’s carbon accounting method, the professors said this would further increase the gap between current levels of ambition and what is needed to achieve the temperature goals of the Paris Agreement.

They urged Australia to clarify its position on using the Kyoto carry-over credits.

Australia has come under repeated pressure by the international community to abandon its plans to use the Kyoto credits.

At the last UN climate talks in Madrid in December, an alliance of more than 30 progressive countries denounced Australia’s carbon credits plans as not aligned with efforts to limit global warming to 1.5C – the tougher goal of the Paris Agreement.

Countries including France, Germany, the UK, Spain and New Zealand signed up to the ‘San Jose principles’, which aimed to set the bar for successful carbon market rules. This included the prohibition of Kyoto credits and pre-2020 units to meet the Paris goals.