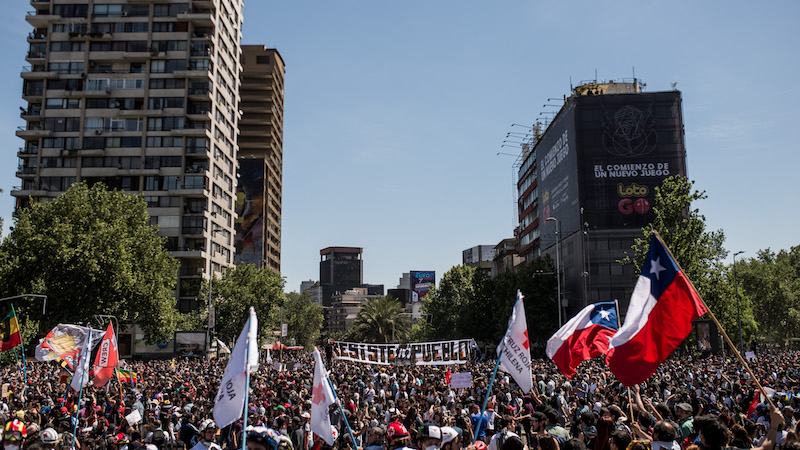 Chile has been seized by the worst wave of social unrest since the end of Augusto Pinochet’s dictatorship in 1990.

A state of emergency has been declared and at least 18 people have been killed in South America’s wealthiest country, host to this year’s UN climate talks and the Asia-Pacific Economic Cooperation (APec) forum next month.

The army has been deployed in the streets of Santiago, where Cop25 is being held in December. Several subway stations have been burnt, limiting transport access to the city centre, and a night-time curfew imposed.

Both the APec summit and Cop25 are due to go ahead as planned but observers say protesters could use the moment as a platform for further mobilisation.

A hike in metro prices was the trigger for the unrest but on the streets protesters denounce the privatisation of social services, raging inequalities and economic policies benefiting a wealthy elite.

Rich countries sought to raise at least $9bn of new cash to replenish the Green Climate Fund at a conference in Paris on Friday. GCF executive director Yannick Glemarec said anything between $9bn and $10bn would be “a big success” – despite being less than donors’ initial $10.3bn pledge in 2014.

That is “a drop in the ocean” compared with what African countries currently need to bridge the energy gap with clean energy. So even as the rich gathered in France, dozens of African heads of state were courting different opportunities at the first Russia-Africa cooperation summit in the resort town of Sochi, on the Black Sea.

The aim? To discuss and broker military, infrastructure and energy deals, largely focused on the oil, gas and nuclear industries.

As one climate campaigner put it, “there is common sense that development with clean energy is the way to go but African governments are trying to develop their economies with the resources at their disposal”. Our story here.

Russia may have recently ratified the Paris Agreement, but in Moscow industrial interests continue to prevail over climate action.

The ministry of the economy gutted its own draft law to regulate emissions and establish legally-binding targets following talks with the ministry of energy, ministry of industry and trade and the Russian Union of Industrialists and Entrepreneurs.

The GCF meeting in Paris was another opportunity for French president Emmanuel Macron to present his government as a leader in climate diplomacy. But at home, climate activists pushing for more ambitious action have been met with violence and dragged through the courts.

Justin Trudeau scraped an election victory to be re-elected Canada’s prime minister. But his failure to gain a majority could give climate action a boost.

Trudeau is going to need cross-party support to pass legislation, likely giving the climate-progressive New Democratic Party stronger influence on the new administration and raising the prospects of a net zero emissions by 2050 target.

But the polarisation on climate action is stark. In the fossil-fuel dependent provinces of Alberta and Saskatchewan, the Liberals were effectively wiped out by the Conservatives demanding the carbon tax be axed. Frustration with the federal government is running high.