After losing majority, Liberals may seek support of progressive parties, opening door for Canada to leap ahead. But some provinces look set to fight back 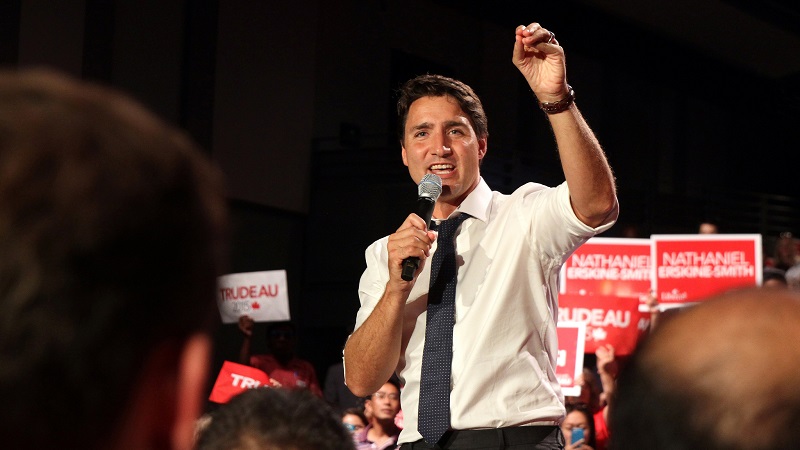 Despite losing the popular vote and losing his majority, Justin Trudeau was re-elected Canada's prime minister on Monday with a minority government. (Photo: Alex Guibord/Flickr)

Justin Trudeau scraped a second term in office on Monday, with likely support from progressive parties meaning Canada may set a carbon neutral goal for 2050.

Despite losing the popular vote and its majority, prime minister Trudeau’s Liberal party came out on top in Monday’s election, winning 157 electoral districts but falling short of the 170 seats required to form a majority government.

Hit by racism and corruption scandals, Trudeau put climate policy at the heart of his re-election campaign, pledging to achieve net zero emissions by 2050 and establishing legally-binding five-year targets. He yet gave little details about how his administration would achieve the target.

He defeated Conservative challenger Andrew Scheer, who had pledged to dismantle the country’s climate policies and scrap its carbon tax. Despite winning 34.4% of the vote, the largest share of the ballots, the Conservatives only secured 121 seats, failing to convince voters beyond the party’s strongholds.

Addressing his supporters on election night, Trudeau said he was returning to Ottawa with “a clear mandate”. “Canadians have voted in favour of a progressive agenda and strong action on climate change,” he said.

Without a majority, Trudeau will yet have to broker deals with other, smaller parties to ensure sufficient support for individual pieces of legislation – an arrangement which could cement progressive climate policy.

“For us, this is really Canadians voting for climate action,” she said. “We hope that this was the last election in Canada when some parties run without a strong climate platform.”

The left-wing New Democratic Party (NDP), which promised to align their policies with limiting global temperatures to 1.5C, won just less that 16% of the vote and had its seats halved to 24. But it is likely to be in a stronger position than in the previous parliament if the Trudeau administration seeks its support to push for more ambitious climate action.

In a speech following the results, NDC leader Jagmeet Singh said his party would pursue “real and urgent action to fight the climate crisis, which must include ending fossil fuel subsidies and reinvesting in clean, renewable energy”.

“If the other parties will work with us, we have an incredible opportunity to make the lives of all Canadians so much better,” he added.

Ross McKitrick, professor specialised in environmental economics at the University of Guelph, Ontario, told CHN that while existing climate policies were set to continue, the expansion of the Trans Mountain pipeline could make or break an alliance between the Liberals and the NDP, which staunchly opposed the project. “That is going to be the balancing act for them,” he said.

With 32 seats, the French-language separatist party Bloc Québécois, which boasts a strong climate platform, were the big winners in this election. The Greens won three seats and 6.5% of the votes and could also play a small bargaining role with Trudeau’s new administration. The far-right and climate science denying People’s Party of Canada have lost their single seat.

Looking ahead, Turcotte said the government will have to set out how it plans to achieve carbon neutrality and could increase Canada’s 2030 climate target before next year’s UN climate talks, when countries are due to update their plans.

“Cop25 would be a good launching pad for the government to speak credibly about its desire to increase ambition. Canadians also gave that mandate to the new government,” Turcotte told CHN.

For Cat Abreu, executive director at Climate Action Network Canada, an increase of Canada’s 2030 target in the next year is “inevitable”, citing progressive cross-party support for the hike.

Yet, in the western prairie provinces of Alberta and Saskatchewan, where politics is closely tied to fossil fuel industries, the Liberals were effectively wiped out by a wave of blue. The vote was a stark rejection of Trudeau’s carbon tax – further widening the gap between the provincial and federal governments on climate action.

On Tuesday, Scott Moe, premier of Saskatchewan, said the “sense of frustration and alienation in Saskatchewan is now greater than it has been at any point in my lifetime”.

He called for Trudeau to scrap the carbon tax and commit to new pipelines so his province and Alberta “can get our exports to international markets”.

“They will certainly ramp up their rhetorical opposition to the federal government,” McKitrick said, adding that without a detailed plan on how to achieve net zero emissions, the target could further alienate provincial governments.

The question of how to transition these provinces away from fossil fuels without abandoning the communities depending on them for their livelihoods is set to become a key issue of Trudeau’s new government.

“We need to broach that conversation and sit on the same side of the table,” Turcotte said. “This should not be a confrontation,” but a “leverage of the success of the transition for the oil and gas sector”.