Government said plans for the meetings had not changed, but protesters and military remain on the streets and the death toll has reached 18 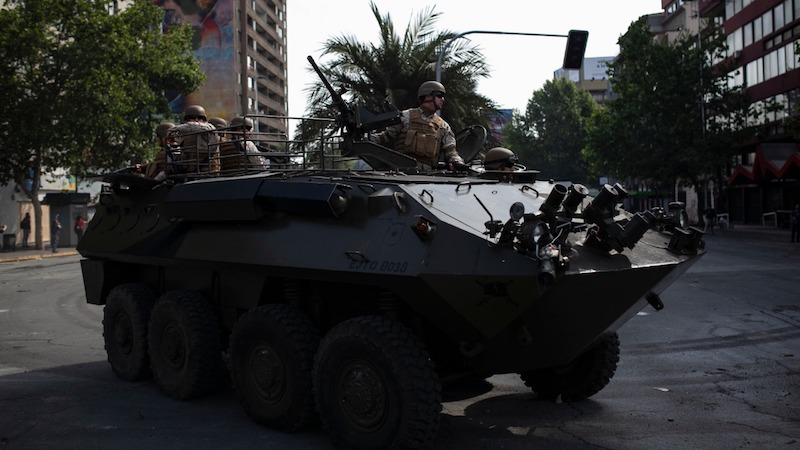 A Chilean army tank in the centre of Santiago before a curfew was put in place for the first time since the Pinochet dictatorship (Photo: Migrar Photo)

SANTIAGO — Just weeks before Chile hosts two major global meetings, including the UN climate talks, civil unrest has cast a shadow over one of Latin America’s wealthiest countries and the ambitions of its billionaire president.

Since last Friday, the country has seen barricades in the streets, the army deployed in the capital, subway stations burned and thousands of people banging cooking pots in massive “cacerolazos”, or casserole, protests every night, defying the first curfews imposed since the Pinochet dictatorship. A state of emergency has been declared.

Eighteen people have been killed in the uprising, according to the government, six killed by the military or police. There have also been accusations of torture and sexual abuse by officers.

The spark was a hike in metro prices. But the grievances on the streets are a long list of policies seen to benefit an economic elite: education debts, poor healthcare, privatised pensions, several cases of collusion, corruption and impunity among the political class and private ownership of the water system in the middle of a severe 10-year drought. 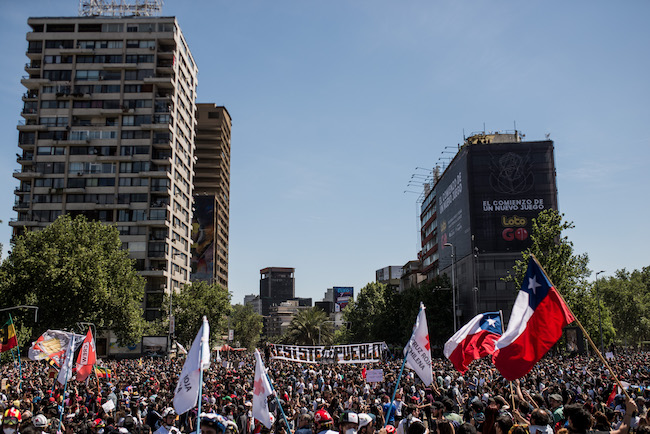 One of the focal points of protesters’ ire is Chile’s centre-right president Sebastián Piñera, who made a fortune running a credit card company. Last week, before the unrest began, Piñera told The Financial Times Chile was “a true oasis within a convulsed Latin America”.

Piñera was speaking in anticipation of two months he hoped would mark him as a statesman and a safe pair of hands in the region. Santiago is due to host the Asia-Pacific Economic Cooperation (APec) forum on 16-17 November and the 25th UN climate talks (Cop25), which start on 2 December.

Russian president Vladimir Putin has confirmed his participation in the APec meet, while the security teams of the US and Chinese leaders Donald Trump and Xi Jinping were in Chile last Friday to evaluate security conditions.

France’s Emmanuel Macron is one of the few heads of state that had previously confirmed his attendance at Cop25. This week, French deputy Alexis Corbière asked the government to suspend its participation in the Santiago climate talks as long as “the army is on the streets”. 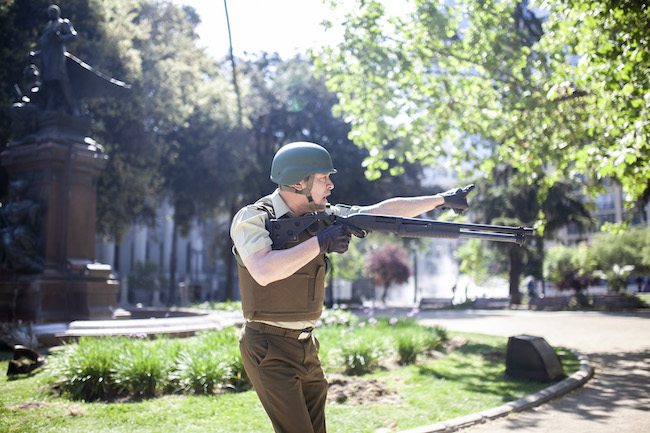 Government spokeswoman Cecilia Pérez said in a press conference that plans for both events had “not been altered”. Sources in the government said they had been ordered not to talk about either meeting, but the primary concern was to guarantee the success of APec. Piñera had hoped the forum would be where Trump and Jinping would agree to end the Sino-US trade war.

Chile’s Cop25 presidency told Climate Home News that “today all Chileans are worried about regaining normality and the task of the next days is to resume dialogue and unity. The teams continue their work in parallel”. The protest’s demands are wide ranging and the movement leaderless, meaning there is no single interlocutor for the president to negotiate the end of the unrest.

The metro in Santiago has been severely damaged, with several stations attacked. The government has recognised the system won’t be completely restored for more than six months. Only three of the six lines are now functional and just a few stations are open.

In just over five weeks time, tens of thousands of UN climate delegates will be trying to reach the Cop25 venue on the outskirts of the city. It is close to Cerrillos station, on the relatively undamaged Line 6. But Line 1, which goes through the centre of the city where most hotels are located, has been hit hard. Shuttle buses during the conference, for now, will be available only from Cerrillos station, not from the city. 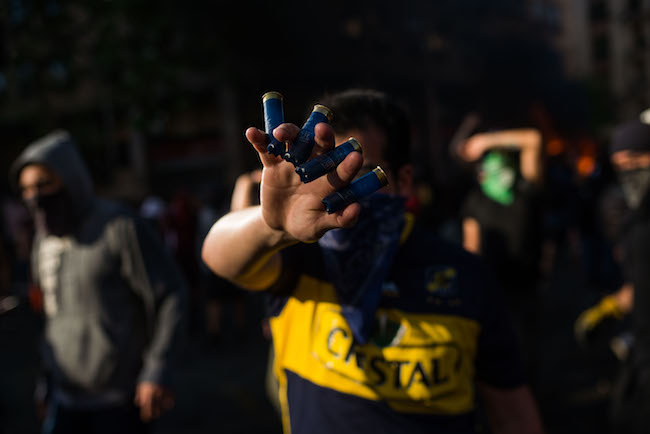 Lucía Dammert, a Chilean security expert, said: “If this is not resolved well, the Cop may be ideal for mobilisations to resurface. And what the government does not want is that this overflows to the Cop.”

Dammert said it “would be the end of the president’s international legacy” if the current repression, including deployment of armed forces, continued, while “hundreds of international climate activists” joined the local movement on the streets.

Hi. Just a reminder that CHN is a small independent news site, dedicated to bringing you stories like this from all over the world. That’s expensive and we need our readers to help. Here’s how you can, even for a few dollars a month.

Protesters have not been appeased by measures announced by Piñera on Tuesday, including a 20% increase to the lowest monthly pensions. In the main square of the capital amid tear gas attacks from police, CHN interviewed 70-year-old Jorge who said his pension was just $137 per month, in a country where the poverty line is around $600 per month. Piñera’s new “social agenda” will increase his earnings by $27.

“This can’t stop, this won’t stop, not until we change this country”, said Jorge.

Manchester City and Chilean national football player Claudio Bravo said on Twitter last week: “They sold our water, electricity, gas, education, health, retirement, medicines, our roads, forests, the Atacama salt flats, the glaciers and now the transport to the private ones. We don’t want a Chile for a few, we want a Chile for everyone”. 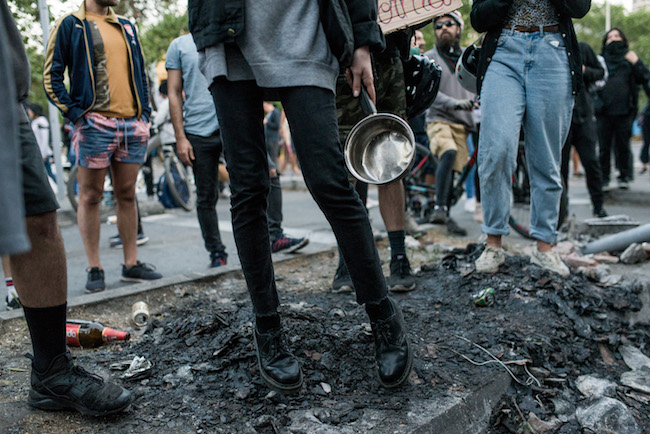 In La Ligua, a city about two hours north of Santiago where the drought has affected families and the local economy, protesters have cut the main highway of the country and filled public squares with banging on cooking pots every night.

“We fight for the dispossession of water, the dispossession of the land,” said Rodrigo Mundaca, leader of water rights movement Modatima and winner of the 2019 Nuremberg International Human Rights award. “This is a reflection of the level of inequality, impunity, abuse in Chilean society and the response of the humble people on the streets.”

Modatima has called Piñera’s government the “water cabinet”. Five of Piñera ministers and direct family have rights over water property in Chile. They include agriculture minister Antonio Walker, whom Mundaca accused of intervening in reforms designed to re-establish public control of water.

Another focus of anger are Chile’s ‘sacrifice zones’, areas where industry, in particular fossil fuel plants, are concentrated and public health impacted.

“We can see it on the walls and slogans: people want an end to sacrifice zones, the recuperation of water and other common goods, as well as the protection of the environment,” said Ezio Costa, spokesman for climate group Sociedad Civil por la Acción Climática.