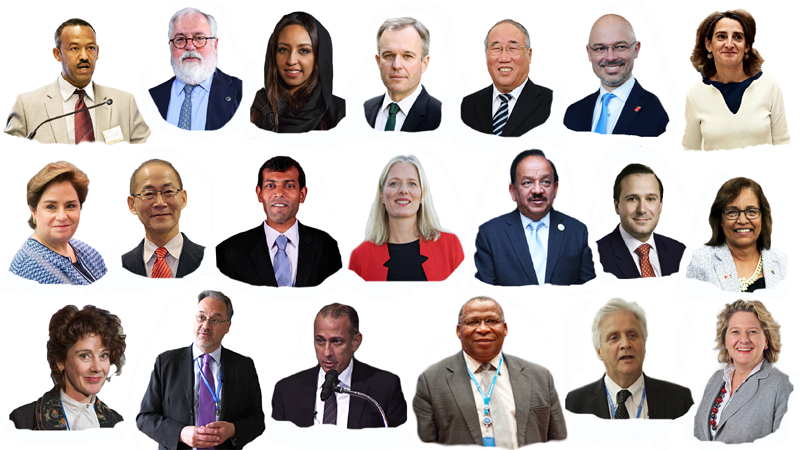 By Jill Russo and Natalie Sauer

The Ethiopian Gebru Jember Endalew chairs the Least Developed Countries’ Group at the UN – a bloc representing 47 nations that are especially vulnerable to global warming, but have done the least to cause it.

Miguel Arias Cañete has been EU commissioner for climate action and energy since 2015. Initially booed by environmentalists for his shares in two oil companies, the Spanish conservative has nevertheless managed to defy expectations by raising the EU’s climate pledge. The EU 2030 renewable energy targets, the ETS, were all achieved in part thanks to Arias Cañete’s knack for getting things done.

Emblematic of a small gender revolution in the top climate jobs in the UN process, Saudi Arabia’s Sarah Bashaan moderates the climate talks in her role as co-chair of the ad hoc working group on the Paris Agreement (APA). She first stepped into the world of climate negotiations in 2012 when advising the country’s minister of petroleum and mineral resources.

François de Rugy is France’s environment minister. Relatively new to the post, de Rugy has positioned himself as a pragmatist on environmental policy, emphasising the potential for a green transition from within the current economic model.

Xie Zhenhua is China’s chief climate change official. Since taking the reins of the State Environmental Protection Agency in 1993, he has led the country in energy conservation and cracked down on China’s pollution. He is the brains behind the Chinese national carbon emission trading system, a market mechanism to control greenhouse gases.

Michał Kurtyka, Poland’s deputy environment minister, is the president of the Cop24 talks, a role managing the running of the conference. When there are deadlocks, the Cop president can be key to mediating a compromise. As a relatively junior figure, his appointment broke a long-running tradition of appointing senior politicians to the presidency.

The head of Spain’s new ministry for Ecological Transition, Teresa Ribera has been working hard since June to turn her country into Europe’s green champion. Since taking office, she has scrapped the so-called sun tax, an unpopular levy on sun power, and impressed environmentalists worldwide with a 250m deal to retrain the country’s fossil fuel workers.

Patricia Espinosa is the UN’s climate change chief. Over the past years she has proved herself to be coalition-builder, be it as the president of COP16, or as Mexico’s foreign minister and ambassador to four countries.

South Korean energy economist Hoesung Lee is chair of the Intergovernmental Panel on Climate Change, the UN’s climate science body. The IPCC released a major report in October with the finding that limiting warming to 1.5C, compared to 2C, could avoid some of the worst impacts of climate change.

Mohamed Nasheed is the Maldives’ first ever democratically elected leader of the Maldives. Only too aware of the threat posed by climate change to his country, he made the headlines in 2009 by holding a cabinet meeting underwater. The Maldives has announced a 2020 target for carbon neutrality. Nasheed is back after a period of political exile, leading his country’s delegation to the talks.

Catherine McKenna is Canada’s environment minister and a key bridge between the EU and China, with whom she has brokered a relationship. She is also one of the few major economy ministers who was in Paris in 2015 and remains in her job.

Harsh Vardhan is India’s environment minister. In its contribution to the Paris Agreement, India has pledged that 40% of the country’s electricity will come from non-fossil fuel sources by 2030 and that it will cut its greenhouse gas emissions for each unit of GDP by a third.

Wells Griffith advises Donald Trump on the US’ energy policy. Like his boss, the White house representative is big on coal and is expected to lead an event promoting fossil fuel energy upon his arrival during the second week of COP24.

Self-described on her Twitter account as the “first female leader of the Pacific,” Hilda Heine is the president of the Marshall Islands. Save from the Fijians, Heine is currently the only leader to have strengthened her country’s climate pledge before the 2020 deadline.

Jo Tyndall is the second co-chair of the ad hoc working group on the Paris Agreement (APA). Before that, she was New Zealand’s climate change ambassador and has, among other things, energetically called on governments to phase out fossil fuel subsidies.

With over 20 years of experience in climate negotiations, Paul Watkinson is now in charge of one of the engines of the UN talks, the Subsidiary Body for Scientific and Technological Advice (SBSTA). The French-British diplomat, who studied mathematics at Cambridge University, has long led the French delegation team in climate negotiations and advised the French minister for ecological transition.

Wael Aboulmagd is both Egypt’s ambassador and the chair of the 130-plus bloc of developing countries known as the G77 + China. That’s almost half of all of the countries present at the climate negotiations.

Emmanuel Dlamini used to chair the Africa Group, the negotiating block representing African continent in climate negotiations. He is now the head of another of the engines of the climate talks, the Subsidiary Body for Implementation, and likes to make spirited interventions. “Knowing is not enough, we must apply. Being willing is not enough, we must do,” is one of the quotes that rang in Bangkok.

Trigg Talley is the US’ top climate negotiator. Having played a key role in securing the Paris Agreement in 2015, Talley now faces the unenviable task of continuing to represent US interests after Donald Trump decided to thrash the agreement he had negotiated. The US is expected to push for the implementation of the Paris Agreement to be as transparent as possible.

Svenja Schulze is Germany’s environment minister. Schulze recently announced plans to collaborate with a fellow social democrat on a CO2 price initiative, but the plan was rejected.