Trade and migration are dominated the Indian prime minister’s visit to the White House, with differences on the Paris Agreement side-stepped 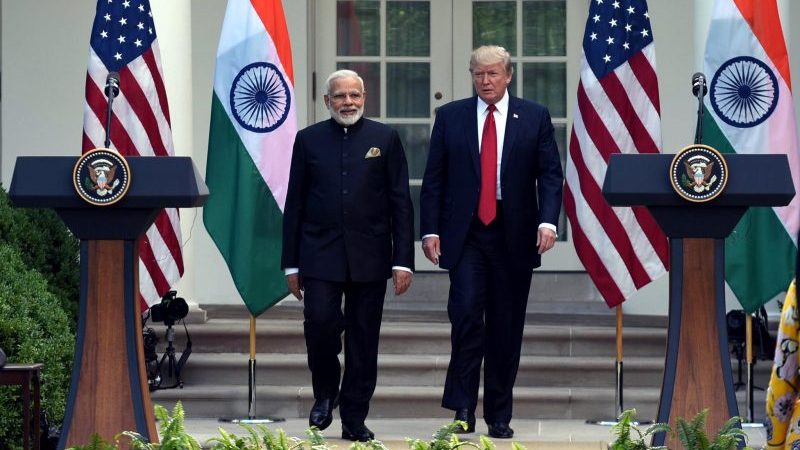 India prime minister Narendra Modi and US president Donald Trump were silent on climate change after their meeting at the White House on Monday.

Sidestepping the two leaders’ divergent positions on the Paris climate deal, the state visit focused on trade, migration and military cooperation. Modi and Trump gave every appearance of friendship, sharing several hugs and handshakes during the visit.

That was at odds with the hostile tone Trump struck towards India when he announced plans to pull the US out of the Paris agreement earlier this month.

In response, Modi said India would go “above and beyond” its commitment to the deal, as part of “our duty to protect Mother Earth”. Modi’s environment minister Harsh Vardhan said the country would pursue climate action “irrespective of the stand of anyone, anywhere in the world”.

A comment by Modi placed in the Wall Street Journal ahead of Monday’s summit made no reference to Paris. Renewable energy was mentioned as an area for cooperation alongside gas, nuclear and “clean coal” to meet India’s growing energy demand.

Look forward to welcoming India’s PM Modi to @WhiteHouse on Monday. Important strategic issues to discuss with a true friend!

Manish Bapna of the World Resources Institute said the omission of climate change “signifies discord, not apathy, on climate, and lies in stark contrast to the productive US-India talks of recent years”.

Some cooperation continues on clean energy, he noted, citing a recent US pledge of $7.5 million towards a joint initiative to develop smart power grids.

In its contribution to the Paris Agreement, India pledged to get 40% of its electricity from non-fossil fuel sources by 2030 and cut its greenhouse gas emissions for each unit of GDP by a third.

Meeting that goal would require $2.5 trillion worth of investment, it estimated, without specifying how much of that would be met from domestic funds.

At the same time, he has stressed that coal will be the mainstay of the power system for the foreseeable future, as the government aims to expand access. Hundreds of millions of Indians are not connected to the power grid.

The US is the world’s second biggest carbon emitter after China. The average US citizen is responsible for nearly ten times the emissions of an average Indian.

Yet Trump maintains the Paris deal was unfair because the US was closing coal plants and mines while developing countries expanded their coal sectors.

He is refusing to honour the emissions reduction and financial aid pledges set by his predecessor Barack Obama, which were never legally binding.

Several states, cities and businesses have declared “we’re still in” the Paris agreement, promising to act regardless of the White House position.