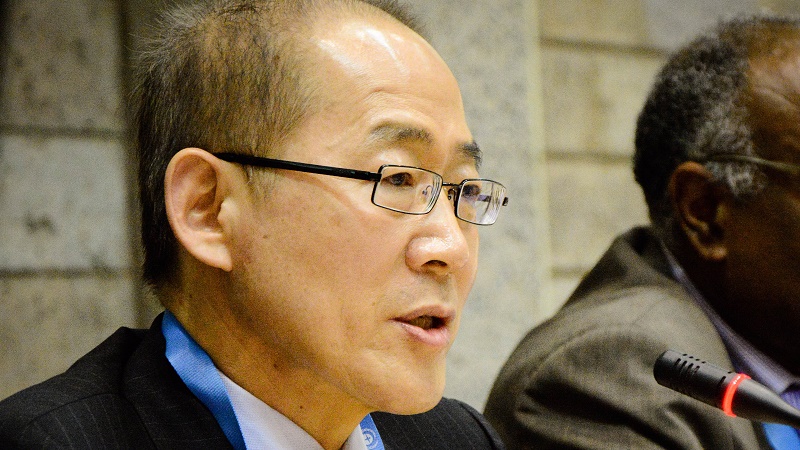 Hoesung Lee was previously a vice chair of the IPCC (Pic: IISD)

South Korean energy economist Hoesung Lee is chair of the Intergovernmental Panel on Climate Change (IPCC), after a tense election in Dubrovnik on Tuesday.

He beat Belgium’s Jean-Pascal van Ypersele to the prestigious post by 78 votes to 56 in a run-off, having knocked out four candidates in the first round.

In his CV for the post, Lee set out a vision to make the UN climate science authority more relevant to policy, seeking inputs from business, industry and finance communities.

Lee named carbon pricing as the most important area for research in climate change, in an interview with specialist blog Carbon Brief. “That’s because it is the driver to put us into the right track.”

New chair of #IPCC , Hoesung Lee of Republic of Korea, shortly after being elected #climatechange pic.twitter.com/bUQD8OclDS

His victory was declared at 9pm in Dubrovnik, based on a poll of representatives from 134 countries.

The ballot had been delayed by three hours as some delegates were unhappy with a new electronic system and the organisers reverted to paper-based voting.

It was the first contest to lead the world’s top authority on climate science since 2002, when Rajendra Pachauri took over from Robert Watson.

Pachauri stepped down early in February to face allegations of sexual harassment in India. He later resigned from the head of TERI, the think tank at which he was accused of inappropriate behaviour towards an employee. He denies the allegations.

The other unsuccessful nominees were Chris Field of the USA, Nebosja Nakicenovic of Austria and Montenegro, Thomas Stocker of Switzerland and Ogunlade Davidson, a late entry from Sierra Leone.

As chair, Lee will steer the IPCC’s work to assess the scientific evidence on climate change and communicate that to policymakers.

It is likely that he will give an opening speech at this December’s UN climate summit in Paris, setting the scene for efforts to strike a global agreement.

Historically, the IPCC has produced a series of weighty reports every 5-7 years, compiling thousands of studies by hundreds of researchers. It is an onerous process for the scientists involved, who are not paid for their contributions.

The IPCC is considering proposals to produce shorter “focus reports” on particular areas of climate science, such as the impact on oceans.

“The IPCC remains deeply committed to providing policymakers with the highest quality scientific assessment of climate change, but we can do more,” Lee said in a statement.

“The next phase of our work will see us increase our understanding of regional impacts, especially in developing countries, and improve the way we communicate our findings to the public. Above all, we need to provide more information about the options that exist for preventing and adapting to climate change.”

On Wednesday, there will be further elections to fill 33 roles in the IPCC bureau.