Climate Weekly: Get set for the UN climate talks in Bonn

A bumper issue leading into key talks. Sign up to have daily briefings from Bonn sent to your inbox 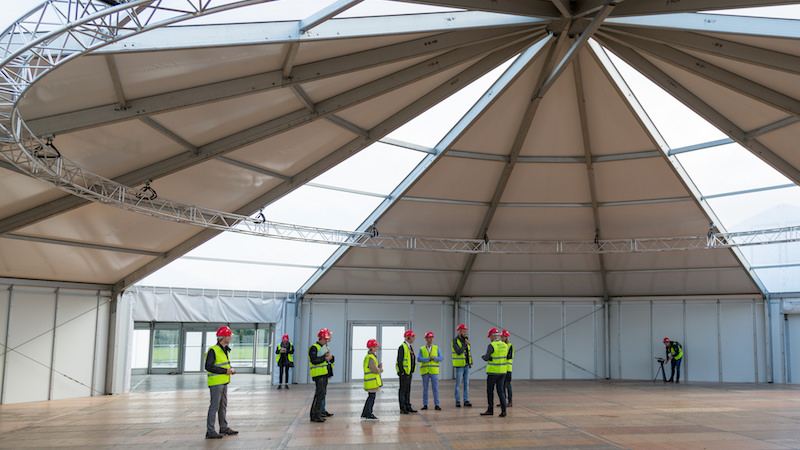 Workers building the structures that will house an estimated 25,000 delegates at talks that start on Monday (Photo: UNFCCC)

Throughout the year, the global community has projected a sense of calm determination in response to the US president’s contempt.

Unity has been a byword. But on Monday climate negotiators need to get into rooms and fight out issues with the Paris deal they are determined not to budge on.

These are critical times. As always at these talks, more than any other news outlet, Climate Home News will be in the room. We are taking our biggest team ever to the former West German capital Bonn. Make sure you are follow our social media feeds (Facebook, Twitter).

The Paris accord remains a shell. A deal with no rules or framework for compliance. That means there is still a huge amount for countries to fight over and just four weeks of major negotiations left until they all need to be set at the end of 2018.

This week our global reporting team dug into the fault lines.

Poor nations said they need more money to be put on the table in Bonn. But a leading African official told Mantoe Phakathi that developing countries needed more than money, they need to experts to use it. Because right now a lot of cash just bounces back in the pockets of western consultants.

From the US, observers say that despite the febrility of their leader, state department negotiators are proceeding as if in a parallel universe and in Bonn they will quietly push the positions they’ve had for years. Sophie Yeo has the story.

We may end up viewing this conference as the first Chinese-led climate talks. Ever more assertive on the global stage and with climate change elevated into leader Xi Jinping’s major congress speech last month, the world’s biggest country looks like taking charge. But with an already massive overseas carbon footprint and plans to spend a trillion dollars growing it, who will keep China in check? Li Jing reports from Beijing.

Meanwhile, India has laid out its stall. Government sources sent a warning to the rich world that they don’t fulfil promises they made to cut carbon and pay finance before 2020 it would undermine the talks, Nitin Sethi reports.

Fiji has tried to ease tensions with a new discussion format, but India and China are adamant that they won’t be increasing their ambition until they see greater action from those responsible for most of global warming, Li Jing and Megan Darby write.

The EU remains an outspoken advocate on climate action and will push others hard in these talks. But internally the bloc remains riven by national interests. Arthur Neslen got the scoop this week on a meeting between German auto lobbyists and EU officials that resulted in a directive to water down proposed targets for electric cars.

The Australians are still trying their best to build one of the biggest coal mines on earth. But, as Adam Morton wrote, the Adani-owned project suffered a major setback on Friday when a state premier came out against federal loans to the project. “Everybody is aware of this mine,” said one Bonn-bound negotiator.

And finally, UN climate champion Hakima El Haite will not finish her term in Bonn after she was named on a list of ‘negligent’ officials by the Moroccan king.

Is the Paris climate deal legally binding or not? – Timmons Roberts and Angelica Arellano, Brown University

Climate Home News is now creative commons, meaning you can republish our work – especially from Bonn. Just follow these guidelines. If you’d like to receive our news alerts for fast, wire style publication get in touch: [email protected]

Got a story in Bonn? Let us know