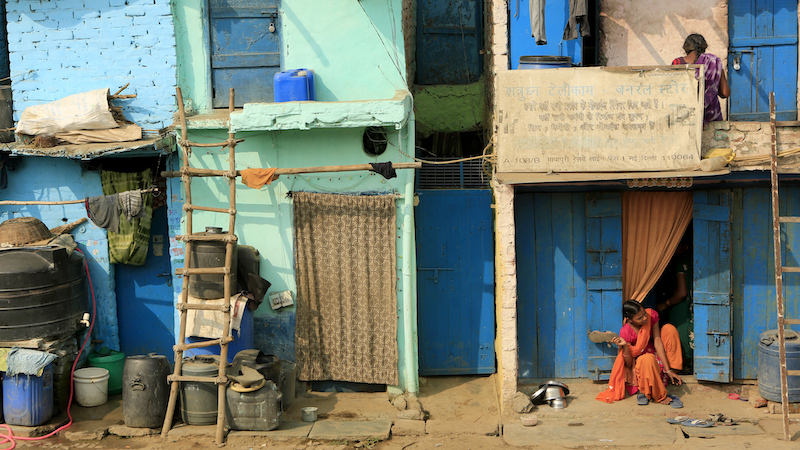 Slums in Delhi. Indians are 33 times poorer than US citizens and its government has demanded help from the developed world to deal with climate change (Photo: Deposit Photos)

By Nitin Sethi and Kumar Sambhav Shrivastava for Scroll.in

In 2015, when 197 countries reached a compromise to draw up the Paris Agreement on containing the effects of climate change, it was clear that the resolution of several key differences had merely been postponed.

As negotiations begin in Bonn on 6 November on the rules to govern that agreement, these differences will have to be addressed.

However, participants have already sensed that these differences may not be ironed out either at this round of negotiations between the 197 member-countries to the UN Framework Convention on Climate Change (UNFCCC) or the next one, which will also be held in 2018. Already, some are suggesting that an extra round of talks will be needed next year to prepare the rules in time for the Paris Agreement to go into effect from 2020.

Here are some of the challenges expected to play out.

One of the first sticking points will be what people involved with climate-change discussions call “the pre-2020 agenda”.

In 2010, each of the developed countries pledged to reduce their annual greenhouse gas emissions by specific levels by 2020 and even enhance these commitments if necessary.

Alongside, they committed to mobilise $100 billion a year starting from 2020 for the rest of the world to fight climate change. They undertook to assist the developing world with acquiring cleaner technologies to ensure that poorer countries do not become as dependent on fossil fuels as rich nations have been historically.

In addition, developed countries that had signed up to the second phase of the Kyoto Protocol of 1997 to reduce emissions were required to ratify the agreement and act according to its rules. In turn, developing countries such as India and China also pledged emission reductions, not in absolute terms but on a relative basis.

The pre-2020 commitments are of significant interest to the larger developing economies. In the pre-2020 period, most of the obligations – to reduce emissions and to provide finance and technology – sit on the shoulders of the developed world. This acknowledges the fact that climate change has so far largely been caused by rich countries burning fossil fuels since the industrial revolution. Now, as developing countries try to raise their standards of living, they will have to bear the substantial additional costs of growing in an environmentally sustainable way.

A much-discussed review by global civil society groups in 2015 of pre-2020 emission reduction pledges showed that while countries like China and India had undertaken to bear more than their fair share of responsibility, developed countries had not. An Indian government report in 2015 showed how rich countries were not providing the money they had promised but were instead resorting to creative accounting to claim they had.

Many developing countries, including India, are expected to fight against the pre-2020 agenda being killed in Bonn. Demanding that it be included provisionally in the agenda at this fortnight’s meeting will be the first step. Getting all countries to agree to actually discuss will be the next and more difficult step.

The biggest question in Bonn for negotiators will be how and when countries should enhance their commitments under the Paris Agreement. Should this be done even before the agreement kicks off or after a few years of monitoring actions to reduce emissions levels?

In Bonn, the incoming president of the talks, Fiji, has put its weight behind making an iron-clad arrangement to get countries to review and enhance their existing commitments on emissions reduction even before the Paris Agreement kicks off. This is in the shape of what the climate negotiators call the “facilitative dialogue 2018”.

Under the Paris Agreement, countries listed time-bound targets to fight climate change. This is a country’s ‘nationally determined contribution’. Developed countries expressed targets for reducing their greenhouse gas emissions in absolute terms. Developing countries such as India committed to targets for relative reductions in emissions growth, along with listing their needs for finance and technology to achieve these goals.

Under the UNFCCC, under which Paris Agreement is stitched, developing countries have a right to access finance and technology from developed countries – the “means to implementation”, in technical terms – to reach their targets.

But the two rounds of discussions in the run-up to the Bonn meet have indicated that it will not be easy to settle this debate. Some smaller developing countries that have small emission footprints (and therefore fewer concerns about the costs of reducing emissions) have been asking for others to ratchet up their targets to cut emissions. They do not emphasise that enhancing the targets of developing countries should be dependent in part on how much funds and technology developed countries will provide.

The concerns about the facilitative dialogue are linked to another debate that will run as a common theme through all negotiation rooms at Bonn – on an early harvest of decisions.

The Paris Agreement recognised that there are six pillars in the fight against climate change: mitigation, finance and technology transfer, adaptation, capacity building of developing countries and transparency of actions. But member-countries accord differing degrees of importance to each of these pillars. Going by their strategic needs, member-countries often try to advance negotiations on selective strands while dragging on others.

To prevent an imbalance in the final outcome of the talks, UN climate negotiations usually resort to a simple practice: nothing gets decided till everything is decided. Even negotiating strands that have reached conclusions are kept on hold till agreements are reached across all strands. This allows countries to see the full picture before they all agree to all the decisions.

But several developing countries including India fear that this convention could get shelved this year if the work on rules for several mitigation-related and transparency-related issues is concluded this year, even as rule-making for other pillars of the Paris Agreement is postponed to the next year. This could happen because the presiding country, Fiji, may want to highlight some progress to claim credit for successful negotiations. It could be aided by countries that would gain strategically from advancing work only on mitigation and yet others that would not lose much either way.

“We are not in favour of early and selective harvest of decisions,” the Indian negotiation said. “The Paris Agreement was secured by ensuring a delicate balance between different elements. That balance has to be respected in the implementation arrangements for the agreement as well. It is essential to see the full picture before we sign agree.”

These big ticket decisions will need the intervention of ministers to resolve. But there are several other important concerns that will see heated arguments across the negotiation floor.

Six of these are:

This article was originally published on Scroll.in. It is not available for republication from CHN.