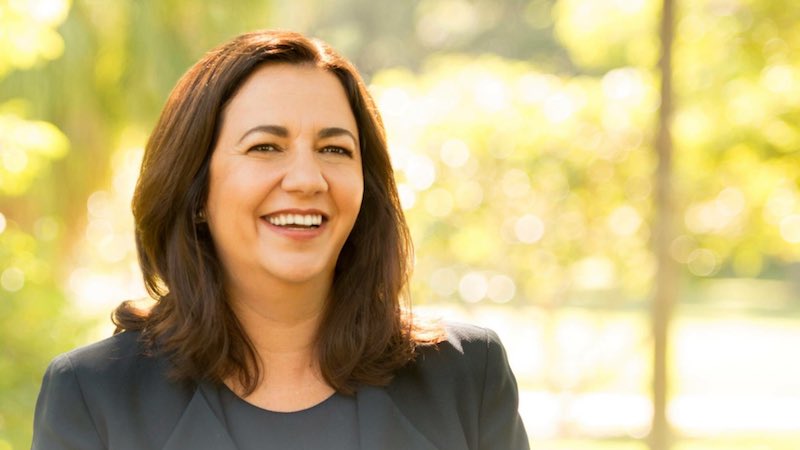 By Adam Morton in Hobart and Karl Mathiesen

The future of the giant Adani Carmichael coal mine in northern Australian – considered a “carbon timebomb” by opponents – may be decided by a state election this month after the local premier shocked observers by pledging to block a A$900 million loan considered vital for it to go ahead.

At a snap media conference late on Friday, Queensland Labor premier Annastacia Palaszczuk reversed her previous support for Indian billionaire Gautam Adani’s application for a concessional Australian government loan to pay for rail line from the outback mine site to a coastal port.

She said she would exercise the state government’s power of veto over any loan after learning of rumours circulating about the role her partner had played in the proposed mine’s approval.

The announcement comes amid heated political debate in Australia and the Pacific region over the proposal to create one of the world’s biggest coal mines in the Queensland outback.

Adani says the fully developed Carmichael mine, to be developed in the state’s north about 340 kilometres south-west of Townsville, would produce up to 60 million tonnes of coal annually for 60 years. It plans to export the coal to burn in its Indian power plants. It would increase Australia’s coal exports by up to 30%.

Members of the Liberal National Party – which is in government nationally, but opposition at Queensland state level – have expressed strong support for the project receiving a loan from a new government agency known as the Northern Australia Infrastructure Facility. The Labor Party has been divided over the project, though Palaszczuk has personally been a consistent backer, claiming it would be a job creator in areas of high unemployment.

The $21 billion proposal has struggled to win financial backing. It was revealed this week Adani was in discussion with a Chinese state-owned company.

Several analyses have found the mine was unlikely to be viable given existing Indian coal plants are running below capacity and the price of solar power is falling dramatically. They also found claims about the number of jobs the mine would create in Australia have been dramatically overstated.

Some Pacific leaders have condemned the proposal, saying it was inconsistent with Australia’s commitment to limiting global warming to less than 2C. Tuvalu’s Prime Minister, Enele Sopoaga, last month said Australia could not continue to open new fossil fuel mines while islands were sinking.

At a climate meeting in Fiji in October, Australian ambassador for the environment Patrick Suckling was reproached in public and private over the project.

A developing country negotiator said: “People were attacking them at the pre-Cop.” The pre-Cop was a meeting to thrash out negotiating priorities ahead of the UN conference of parties (Cop), which opens in Bonn, Germany next week. The negotiator said diplomats were watching closely how Australia handled the project. “Everybody is aware of this mine.”

Palaszczuk did not address climate concerns in her announcement, and said she still supported the mine and the jobs it would deliver. She said she did not know her partner, PricewaterhouseCoopers infrastructure advisory director Shaun Drabsch, was working on the Adani project before hearing of what she described as a “smear campaign” by local members of the national Liberal National government.

“Let me make it absolutely clear – I guard my integrity most dearly,” Palaszczuk said. “I want to put beyond any doubt that this is nothing more than an LNP smear.”

Whether the national government could legally bypass a state veto is untested, but the announcement will fuel the hopes of environment groups who oppose the mine.

Campaigners trying to block the campaign were taken by surprise, but believed it could at least in part be explained by internal polling ahead of the state election on 25 November.

“This is a great moment for Australians that support clean air, clean water and a safe climate. But it is not the end of this campaign. Australians will stop this mega coal mine,” said Australian Conservation Foundation CEO Kelly O’Shanassy.

There have been concerted national and local campaigns against the mine, and the government’s position on the mine has come under scrutiny in the first week of the campaign, including having the election announcement interrupted by anti-Adani protesters. Recent polls have suggested a majority of taxpayers oppose the mine.

With the government in caretaker mode ahead of the election, Palaszczuk called on her opponent, state Liberal National leader Tim Nicholls, to join her in vetoing the project. He refused.