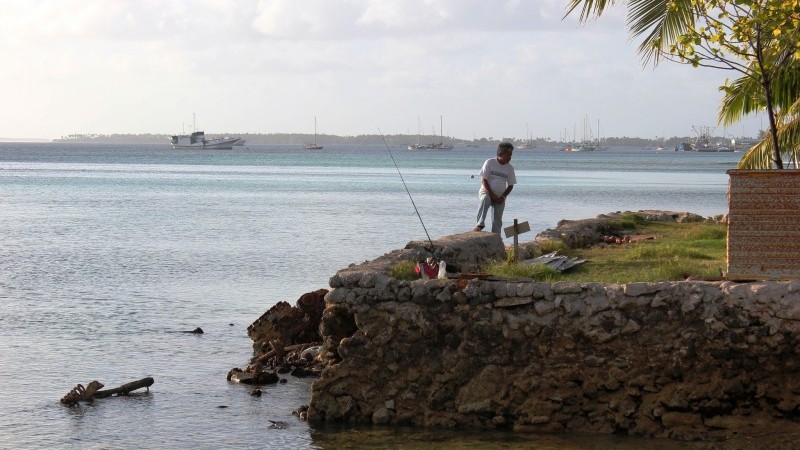 The Marshall Islands is primed to ratify the Paris climate agreement, after parliament gave its approval on Friday.

The low-lying atoll nation is in a state of emergency, experiencing a drought that could see fresh water run out for capital Majuro in three months. It is also vulnerable to rising sea levels, with “king tides” regularly flooding homes.

President Hilda Heine, elected in January, said: “No President wants one of their first acts in office to be to declare a state of disaster. But by becoming one of the first countries to ratify the Paris Agreement, we have shown our determination to continue to lead this fight from the front.”

She urged governments worldwide to realign their targets with a 1.5C limit on global warming, adopted as an aspirational goal in Paris. The 2C threshold previously agreed is expected to see small islands like the Marshalls swallowed by the ocean.

Germany’s environment minister Barbara Hendricks cited vulnerable countries at a conference in Berlin on Friday. Her department is drawing up a plan to cut greenhouse gas emissions 95% from 1990 levels by 2050.

The UK is preparing legislation to reduce emissions to net zero, on top of an existing target of 80% cuts by mid-century. President Heine welcomed that move, saying the deadline for Britain to become carbon neutral should be no later than 2050.

Analysis: The UN clerk tasked with ratifying the Paris deal

Tony de Brum, Majuro’s foreign minister at the time, was a key figure driving the inclusion of a 1.5C goal in the Paris text. While he lost his seat in the latest election, parliament has appointed him as an ambassador to continue international engagement on climate change.

Technically, countries have to sign an international deal before they ratify it. UN secretary general Ban Ki-moon has invited world leaders to a signing ceremony on 22 April in New York.

To enter into force, the Paris agreement needs ratification documents from 55 countries covering 55% of global emissions.

Some capitals will complete the formalities faster than others. EU leaders agreed last week to ratify “as soon as possible”, but experts say it could take two years to establish the responsibilities of member states under the deal.