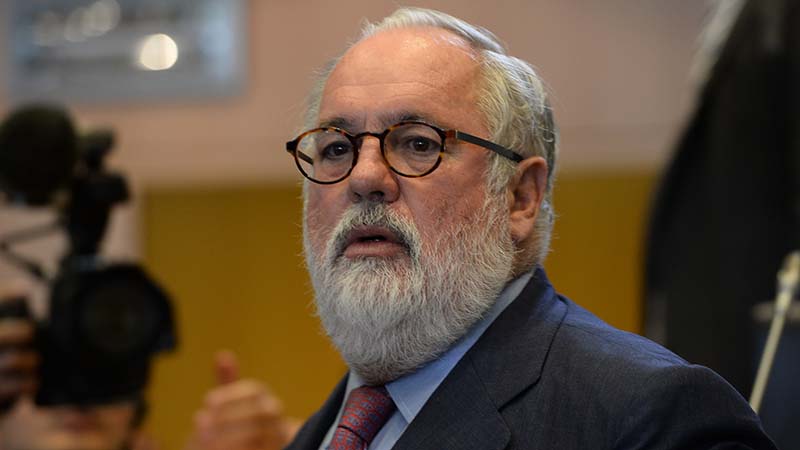 The European Union faces months of internal wrangling before it can ratify the UN climate deal agreed in Paris last December.

Brussels will take part in a signing ceremony to be hosted by Ban Ki-moon at UN headquarters in New York this April.

But experts say it could take until late 2017 or 2018 to get the detail member states need to formally accept the agreement.

And the 28-strong bloc’s leaders are showing little appetite for raising ambition during that time, despite Brussels backing a tougher global goal at the critical UN summit.

At a panel event hosted by think tank Bruegel on Monday, climate and energy commissioner Miguel Arias Canete reeled off a long list of policies.

“We will have to work very hard in 2016 to overcome the last hurdles of the agreement,” he said. “All signatories have to live up to their responsibilities and implement the agreed provisions.”

What was not evident was any shift in strategy post-Paris.

It was left to Hendrik Bourgeois of General Electric to point out that the EU’s 2030 climate targets were inconsistent with the Paris pact.

At the UN summit, Canete boasted of helping to build a “high ambition coalition” between rich and poor nations. The resulting text promised to hold global warming “well below 2C” and “pursue efforts” for a 1.5C limit.

“Things will have to change and action will be necessary,” said Bourgeois.

Heads of member states are set to discuss on 17 and 18 March whether to review the 2030 package in light of the Paris agreement.

But there is little political will to rehash intense battles over the bloc’s ambition level.

While Sweden and France have made the case for stronger action, as reported by newswire Carbon Pulse, Poland is arguing for more handouts to polluting industry.

Even without revisiting the headline objective, there will be debate over how to put it into practice.

Energy-intensive businesses are getting more vocal about concerns a high carbon price could drive investment abroad, said Canete. “All the lobbies were very quiet before Paris. Everybody was silent. The day we came out of Paris, all the lobbies came out and said there is carbon leakage…”

There are ongoing reforms to the EU-wide carbon market, which covers around half of emissions.

For the rest, the European Commission is working on a proposal on how to divide the effort between member states. Due to be published in summer, that will take at least a year to churn through the democratic process, likely longer.

For the EU to ratify, the Council of Ministers, with the consent of the European Parliament, needs to adopt a decision.

Sebastian Oberthur, EU environmental policy expert at Vrije Universiteit Brussel, told Climate Home: “Politically, that arguably requires an understanding on the effort-sharing between the member states and the ETS revision.

“It is not very convenient, but if everybody works towards that ratification and it just takes two years, that is pretty normal for an international treaty. If I was the EU, I would start to get worried if it looked as if I was not able to ratify.”

At the moment, Poland is blocking an extension to existing treaty the Kyoto Protocol, pending analysis of the economic impacts.

The recently elected government has attacked the climate agenda, seeing it as a threat to the country’s ailing coal sector. Jaroslaw Kaczynski, leader of the ruling Law and Justice Party, said Warsaw should have vetoed the EU2030 deal.

He said: “As one member state is not ready, there is a discussion that we need to have at the political level in terms of how to take the whole element. In reality, I think that in the past we have seen pieces of legislation where not all member states did their own ratification.”

In contrast to the EU’s cautious post-Paris stance, US president Barack Obama is using his last year in office to propose new climate policies.

US negotiators insisted on a deal constructed so the president could ratify it without going through a hostile Republican-dominated Congress.

China is also thought to be preparing for a speedy sign-off. The Paris deal will enter into force when 55 countries covering 55% of global greenhouse gas emissions ratify the agreement.