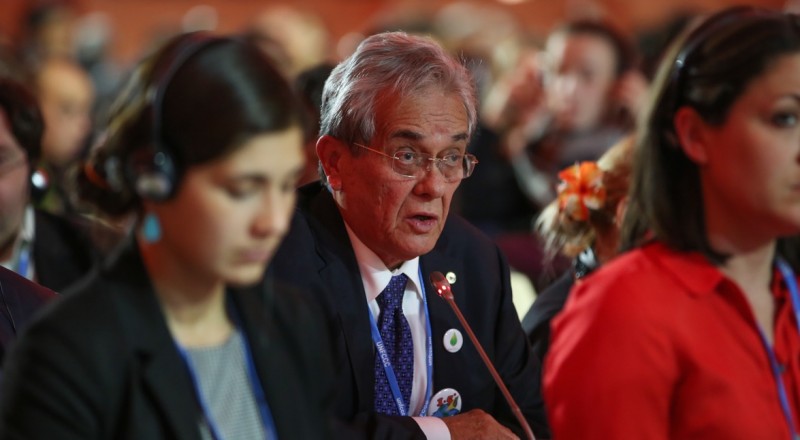 A genial 70-year old from the Marshall Islands looks set to be an unlikely hero at the Paris climate talks.

Tony de Brum is foreign minister of the tiny Pacific state, best known for hosting US nuclear tests in the 1950s.

The atomic bomb failed to wipe its coral atolls from the planet, but rising sea levels may one day extinguish a nation.

That climate change could kill a culture is cruel. It’s even worse when you consider its 24 atolls are barely visible on a global map and account for 0.00% of world greenhouse gas emissions.

De Brum’s own home is under attack. On a recent visit to the UK he told reporters a storm had washed a boat up next to his living room.

It makes these talks a personal battle for a man long used to fighting asymmetric battles with limited resources.

De Brum looked tired when he climbed the stage at a press conference on Wednesday. The creases in his face are now deep, the hair greyer than before.

But there was a twinkle in his eye, a smile matching the coral necklace he wears. That’s because the islander had become the conductor – of a coalition numbering over 100.

The group, he explained, is “about joining the voices of all those who are committed to an ambitious agreement and a safe climate future – big and small, rich and poor.

“To do this, we are building the personal bonds between us as Ministers, and forging a joint resolve to fight together.”

It’s those bonds that are so key late in the day at these talks. As tiredness seeps into the soul and the small letters of a climate text start dancing to their own orchestra, friendships forged over time become vital.

It marked the launch of the so-called “coalition for ambition”, a group of developed and developed countries that had agreed to target a 1.5C warming threshold – so beloved of island states – as well as regular reviews and a long term climate goal.

Significant because it took a veteran Pacific islander to pull some of the world’s top economies into shape. It may yet prove to be a tipping point at these talks, when countries came together for a common goal and to protect the most vulnerable.

This wasn’t an easy win. Progress at UN talks rarely comes easily. Hours before the US were officially unveiled as members of the group the EU was still battling hard to get Stern to agree to tougher legal language as a condition for joining.

And it’s easy to forget that just three years ago de Brum and Stern were at each others throats over the toxic issue of loss and damage, or climate compensation.

Now it’s smiles and hugs (in public at least), a result of a heavy and sustained barrage of diplomacy from both sides.

De Brum must have a huge carbon footprint after this year, meeting his counterparts across the world on a relentless schedule.

European capitals, Africa, Asia, Latin America and the US have all welcomed the Marshalls envoy, if not his stern words for colleagues.

“If we were to keep quiet, our friends in Finland would probably not be contributing like they are now to some of the causes of climate change in the Pacific. Somebody’s got to bring it to their attention,” he told Carbon Brief in a recent interview.

The constant flying leaves some of his young team of advisors looking weary – but what must it do to a 70-year-old? Still, sleep may be the last thing on his mind as the endgame draws close.

Talks on a global climate pact have been taking place since the early 1990s. Never has such a deal been so close as it is in Paris this week.

De Brum’s time in the limelight has days to go. He lost his seat in last week’s election and says he will continue the fight from home – and allow others to take up the baton.

The outcome in the French capital is still uncertain. But what’s clear is for may of thew world’s most vulnerable countries, his energetic and apparently effective brand of diplomacy will be missed.