The UN clerk tasked with ratifying the Paris deal

In the strike of a gavel, 195 nations adopted a global climate pact last year. Approving it may take years. This lawyer is on hand to record the finished product 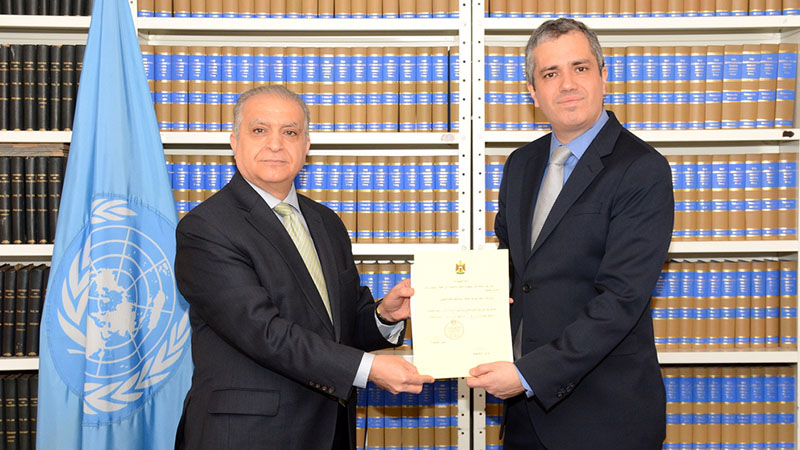 A newly-inked global warming agreement enjoys no special status among Santiago Villalpando and his team of five lawyers.

Burrowed away in the United Nations’ Office of Legal Affairs, the head of its treaty section oversees the safe-keeping of more than 560 multilateral accords.

Printed on acid-free paper, some date back to the League of Nations in the 1920s. All take up rows of archive space in its New York headquarters.

Photo ops come with the job. On Tuesday, it was the turn of Iraq’s envoy on its accession to the Stockholm Treaty on Persistent Organic Pollutants.

Jointly clutching an A4 piece of paper, smiles fixed and with the UN’s baby blue flag draped to one side, this wasn’t the week’s first.

On Monday, Botswana accepted the Doha Amendment to the Kyoto Protocol. Uruguay ratified the International Convention for the Suppression of Acts of Nuclear Terrorism last Friday.

It’s part of the choreography of international relations and December’s climate pact will be like any other, he says by phone.

“In the field of international law the Paris agreement is following a very well established path,” he says, “although it is under bigger media attention than other treaties deposited with us.”

UN secretary-general Ban Ki-moon’s clerk talks me through what it is an abstruse, jargon-laden process for most. Plenty of officials in other offices work on the Paris agreement, he reminds, but the finished product comes to his.

Some 196 parties to the UN’s climate body (195 countries plus the European Union) adopted the Paris agreement last December. But that’s not set in stone.

Deeds matter, not words. Paris’ predecessor, the Kyoto Protocol, was dealt a blow when the US refused to ratify it in 2001 despite signing. To date, only 61 countries have signed its second phase for 2013-2020 (the Doha Amendment). Another 83 have to sign to bring it into force.

The Paris agreement invited “all Parties to the Convention to sign the Agreement at the ceremony to be convened by the Secretary-General, or at their earliest opportunity, and to deposit their respective instruments of ratification, acceptance, approval or accession, where appropriate, as soon as possible.”

So what happens next?

There are four phases. Adoption, signature, ratification, and entry into force.

Ban Ki-moon has invited countries to a signing ceremony in New York on 22 April. Only heads of state, heads of government or ministers of foreign affairs can strictly sign. A book will then lie open for a year.

Signing shows that a state will start the domestic process to accept the treaty, says Villalpando. That means consulting its legislature or executive.

Lawmakers in Pacific islands Fiji and Palau, plus Germany, have reportedly completed that process, although they can’t submit their “instruments” before signing.

It also commits the state to not “defeat the object and purpose” of the treaty, in line with Article 18 of the 1969 Vienna Convention.

Villalpando likens it to a King sending emissaries to countries to sign a peace treaty before presenting it to the legislature on their return.

Next parliaments, Congress, assemblies have to “ratify”, “accept”, “approve”, or “accede” the deal.

The wording is deliberately loose. “The objective is to give flexibility to states in light of their own constitutional requirements,” he says.

Ted Cruz: ‘I would pull US out of Paris climate deal’

In the US, where Republican presidential candidates have vowed to ditch the Paris deal, this allows lee-way for the administration to legally proceed. Accepting rather than ratifying allows President Barack Obama to bypass Congress.

Countries will then send on the papers to their mission to the UN for delivery. Some prefer a ceremony, while others content themselves with a post or fax.

Now the final part. For the deal to take effect from 2020, at least 55 countries producing 55% of greenhouse gases have to deposit these “instruments” with Villalpando’s office.

China, the US, the EU 28-country bloc and Russia would do it, according to data compiled by environmental think tank WRI.

As we talk, the original copy Paris agreement is being printed off to be stored away among arms trade, conservation and children’s rights treaties, he says.

“In other words, we are going to be custodians of the Paris Agreement… for posterity.”