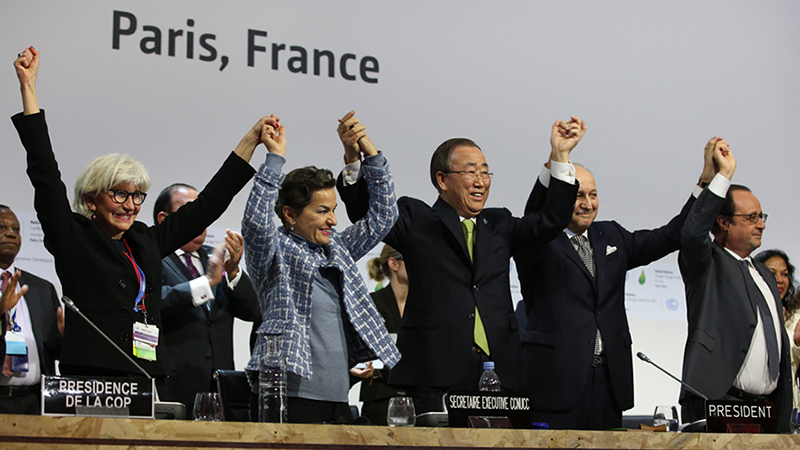 In December, 195 countries struck a deal binding all countries for the first time to cap warming to “well below” 2C, “pursuing efforts” to keep it up to 1.5C by the end of this century.

Some 55 countries representing at least 55% of global emissions must ratify the ‘Paris Agreement’ for it to enter into force for the period 2020-2030.

Signing the agreement would be a bold political statement, though a president’s initials alone won’t suffice.

Countries must “deposit their respective instruments of ratification, acceptance, approval or accession” with the UN to finalise the agreement.

The signing ceremony will also be legally significant, an expert told Climate Home.

“On signing… under international law you are obliged not to undertake any actions that defeat the purpose of the treaty,” said Sebastian Oberthur, a professor at the Vrije Universiteit Brussel, citing the Vienna Convention.

Ban aims to use the day, celebrated as Earth Day in many countries, to engage business leaders to scale up money used to fund green projects.

Countries have pledged to jointly mobilise $100 billion by 2020, which will become the minimum expected in the following five-year period.

On Wednesday, the UN headquarters will host an investor summit on climate risk, and will discuss how to ramp up the trillion dollars of climate finance required to meet Paris’ ambitious goals.

According to the UN, carbon-cutting national plans won’t prevent catastrophic levels of warming of 2.7C on pre-industrial levels by 2100, if fully implemented. A ‘global stocktake’ of plans is slated for 2018.

A Dutch think tank has called on countries to announce more ambitious pledges by the time the signature book shuts after a year in April 2017.

““The adoption of the Paris Agreement caps a remarkable year of multilateral achievements for people and the planet,” Ban said.

“It provides a solid foundation for the low-carbon, climate-resilient transformation of the global economy.  This transformation will help secure a future that is safer, healthier and more prosperous for all.”