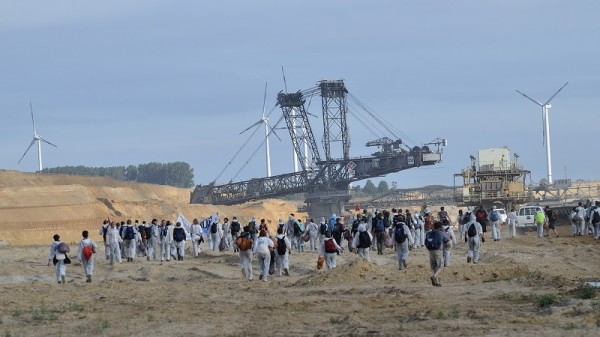 This week has been all about coal. Measuring its emissions, making (less and less) money from it and blocking it in different ways.

In China, according to a study published in Nature, people overestimated how dirty the coal was.

It means the country’s greenhouse gas emissions in 2013 were 14% lower than previously thought, the researchers said. Cue a million adjustments to spreadsheets around the world.

What hasn’t changed is the emissions league table – China is still at the top.

Greenpeace’s Li Shuo said it showed the importance of a commitment to transparency of emissions accounting in a Paris climate deal.

Coal is not making a lot of money for miners at the moment. Commodities giant Glencore posted disastrous first half results, as low coal and oil prices hit earnings.

STAT OF THE WEEK

As concerns about the fuel’s contribution to global warming mount, its defenders are digging in.

Poland’s incoming president, Andrezj Duda, bluntly admitted that he was against the EU’s climate policies because they conflicted with his country’s coal interests.

Climate watchers dismissed his remarks as posturing, since Poland has already signed up to the EU climate and energy package.

Meanwhile, Australia is planning to double its coal exports, a “batshit crazy” strategy as far as The Australia Institute’s chief economist Richard Denniss is concerned.

But the mining expansion threatens to undermine any climate deal struck in Paris this December, Denniss said at a seminar in London this week.

That’s why he is backing Kiribati president Anote Tong’s call last week for a moratorium on new mines. And he reckons it could fly, not least because existing coal companies stand to benefit from less competition.

QUOTE OF THE WEEK:

“It’s ironic, given we are at ground zero of climate change, the government has approved over 50 coal power plants” – Gerry Arances from the Philippines movement for climate justice. As Ed King reports, the vulnerable country is making a huge bet on coal – a policy that looks hard to resist while coal prices are at rock bottom.

Activists in Germany weren’t waiting for a global agreement. On Saturday, around a thousand of them marched into an RWE opencast coal mine and halted the diggers.

Under the banner Ende Gelaende – “here and no further” – they targeted the site as one of Europe’s biggest sources of emissions. Check out the pictures.

Analysts at the Carbon Tracker Initiative have been warning investors in coal, oil and gas for the past four years those assets are not a safe bet.

From being dismissed by traders as “a bollocks subject”, the idea of a carbon bubble has become hard to ignore. Ed King looked at how one small think tank has transformed the climate debate.

Drawing on the Qur’an and Islamic tradition, they urged the world’s 1.6 billion Muslims to support a fossil fuel phase-out. And they singled out oil producing states, many of which have Muslim majorities, for leadership responsibility.

Brazil also threw its weight behind the idea of a long-term emissions goal in a Paris climate deal – the first emerging economy to do so.

As German chancellor Angela Merkel visited Brasilia, her counterpart Dilma Rousseff endorsed the G7 call for decarbonisation of the global economy by 2100.

This week, climate pledges were brought to you by the letter ‘D’: Djibouti, Democratic Republic of Congo and Dominican Republic. Check out our Paris Tracker.

Alex Pashley totted up the price tag of submissions by developing countries, many of which have taken this opportunity to set out their investment needs. It comes to US$300 billion and counting.

With eight (now seven) weeks to go until governments vote for the next person to assume the highest profile position in climate science, Megan Darby profiled the candidates.

Five men are in the running for the chair of the Intergovernmental Panel on Climate Change, but who should win? If you have an opinion, drop us a line.