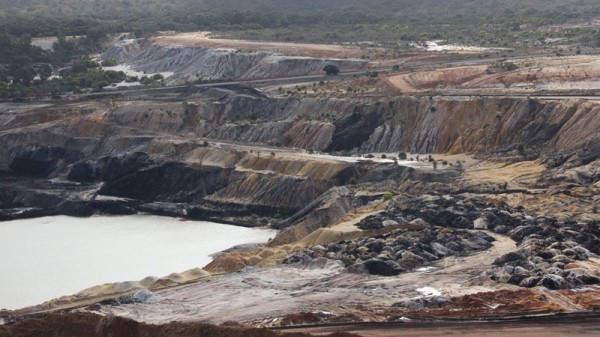 Commodities giant Glencore revealed tough times for its fossil fuel businesses in its half year results on Wednesday.

The Anglo-Swiss company’s earnings from coal mining were down 14% and oil extraction 22% from the same period in 2014.

Optimum Coal, a South African subsidiary, is facing “business rescue proceedings”, blamed on being locked into a loss-making supply contract.

Globally, coal prices have slumped on weak demand from China, due to a combination of increased hydro and nuclear power, and slower economic growth.

US and Indonesian producers are cutting back on supply, Glencore said, but “more slowly than required by market forces”.

Coal in the crosshairs

In its report, the firm named climate change as one of its principal risks.

As the most carbon intensive fossil fuel, coal is a target for policymakers, climate campaigners and sustainably minded investors.

China, the US and EU are all clamping down on coal emissions, citing air pollution and health as well as climate concerns.

Scientists estimate less than 20% of known coal reserves can be burned if global warming is to be held to 2C, the international target.

Several universities, local authorities and charities have withdrawn funds from the sector in protest at its climate change impacts.

And some institutional investors are starting to question coal’s long term viability, with Norway’s US$900 billion sovereign wealth fund the biggest to divest.

Glencore acknowledged the trend in its 2014 annual report.

“Regulation of greenhouse gas emissions could increase costs and reduce demand,” it said.

“Furthermore, the desire or ability to invest in us by some investors may potentially be reduced or eliminated due to changes in investment policies concerning fossil fuels companies.”

Impacts in the long term

Yet in its latest sustainability report, the mining major denied such curbs on demand would take effect in the short term.

“We do not believe that carbon constraint policies are likely to affect the global demand for coal in the next two to three decades,” it argued, “as national governments are unlikely to compromise future energy security, economic growth or national trade competitiveness.”

Citigroup on Tuesday challenged that analysis, warning the pain for coal producers wasn’t going to end any time soon.

The industry’s view that things would pick up was “best described as optimistic and hopeful”, the bank said.

But announcing the results, Glencore chief Ivan Glasenberg insisted the company’s mix of assets made it better placed than most to weather market volatility.

“We remain by far the most diversified commodity producer and marketer and are well positioned to benefit from any improvement in pricing when it finally and inevitably materialises,” he said.