Who will take the most prestigious climate science job in the world? RTCC investigates 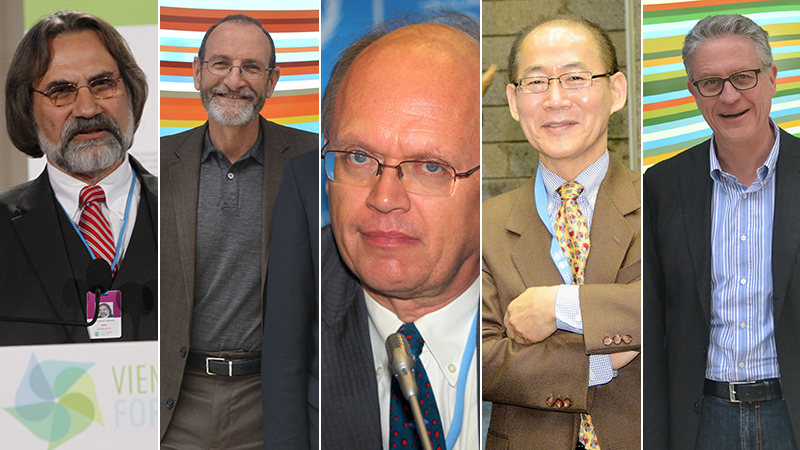 There are no opinion polls. The votes will be cast by government officials. Even the candidates admit they have little idea how it will go.

The election of a new chair for the Intergovernmental Panel on Climate Change, eight weeks away, is a hard one to get a handle on.

Yet the successful nominee will become the world’s go-to authority on climate science, replacing Rajendra Pachauri, who quit in February to contest allegations of sexual harassment.

He (barring last-minute entries, it’s going to be a man) must uphold the integrity of an evidence-gathering exercise that relies on the unpaid labour of thousands of scientists.

He must navigate the competing priorities of national policymakers, as they grapple with global warming impacts and decarbonising their economies.

And he will likely make an opening speech at December’s UN climate summit in Paris, setting out the context for action.

So who is the right choice for this privileged platform? Five people have been put forward by their governments.

At first glance, they look quite similar – and not just because they are exclusively male and from the global north. All boast professorships, reams of peer-reviewed publications and experience in the IPCC machine.

The candidates scrupulously avoid commenting on their rivals, not helping with the task of telling them apart.

But a closer look reveals some differences of emphasis, if nothing else.

Hoesung Lee, from South Korea, has perhaps the most concise and radical pitch, setting out his vision in three bullet points.

It shows he is not afraid to wade into politically sensitive territory, calling for a focus on issues like job creation, health and poverty alleviation.

Making science relevant to policymakers is core to the IPCC’s mission, but there is a trade-off with (perceived) scientific integrity.

The US nominee, Chris Field, takes the other end of the spectrum. Perhaps reflecting his country’s polarised climate discourse, he conservatively bases his case on scientific performance.

“I am a scientist of the highest caliber,” he declares on his website.

Aren’t they all? If you look at the breadth and depth of candidates’ research, he tells RTCC, selecting his words carefully, the “differences are potentially meaningful”.

And he is uncomfortable talking about the political element of running for election, declining to say where he has canvassed for votes.

Jean-Pascal van Ypersele, the Belgian candidate who was first to declare his interest in the position, has no such qualms.

The week before RTCC interviewed him, van Ypersele had been to Cuba, Bolivia, Uruguay and Argentina.

This was not just to meet government figures, but also for wider IPCC outreach. In Buenos Aires, he proudly claims to have addressed an audience of 2,500 in a theatre, the science interspersed with dance acts.

He makes a selling point of his full-time commitment to the role, with the backing of his university and government.

Although when talking to prospective voters, he says: “The IPCC should not be prescriptive – I never tell them they should choose me. I explain to them my vision.”

The last to declare his candidacy, Nebojsa Nakicenovic is also the only one not currently part of the IPCC’s management “bureau”.

“I might bring a little bit of fresh air in the process,” he tells RTCC – although he has been involved with the IPCC since its inception.

It wasn’t a late decision to run, he says, but his joint nomination from two governments took a little longer to coordinate.

Nakicenovic calls Montenegro home and is professionally based in Austria. His specialism is emissions scenarios that bring together human activities and climate change impacts.

“Science is a very wide spectrum. My wish would be to see much more integration across these disciplinary boundaries. That is a natural progression for the IPCC,” he says.

His electioneering in the coming weeks is targeted at gatherings of policymakers: a New York meeting on sustainable development goals and interim climate talks in Bonn next month.

Switzerland’s Thomas Stocker, a physical scientist by background, has recently promoted an increased focus on the regional impacts of climate change.

A pioneer of the “headline statements” included in assessment reports to help get a clear message across, he told RTCC communication was of “high importance”.

On the future of the IPCC, his CV calls for development of young scientists and regional experts, with more frequent outreach.

This is all very well, but what do the voters think? Representatives of some 130-140 governments are expected to show up to Dubrovnik in October for the election.

If no candidate gets a majority vote in the first round, there will be a run-off between the two highest placed.

“It is next to impossible to guess how the governments will be voting,” says Nakicenovic. “There is a huge diversity of interests, of concerns about climate change and response strategies.”

Even Belgium’s van Ypersele, with his long-running campaign, is not certain of support.

“I am confident I will have many votes,” he says. “Often, the ministers are very polite and then it is not always evident what they will ultimately decide, but it is good that they listen and we talk face to face.”

With any international process, one suspects there are diplomatic concerns at work, as well as considerations of merit.

A source close to the race, speaking on condition of anonymity, said the three European candidates might split the vote.

“I can see them knocking each other out in the first round,” the source said. “I would not be surprised if the second round was between Chris and Hoesung.”

Is it like Eurovision, a song contest in which people tend to vote for their countries’ regional allies?

“I actually don’t think that is that important,” he tells RTCC. “The candidate has to be respected by the scientific community, manage the IPCC process, really good communication skills and understanding of policy issues.”

And the chair is not the only position up for election, he points out. There will also be appointments to head up the different work streams and play coordinating roles.

“You have to have a good geographic distribution of players at the higher echelons… when we are making up our mind about who we are going to vote for, we will look at the whole package.”