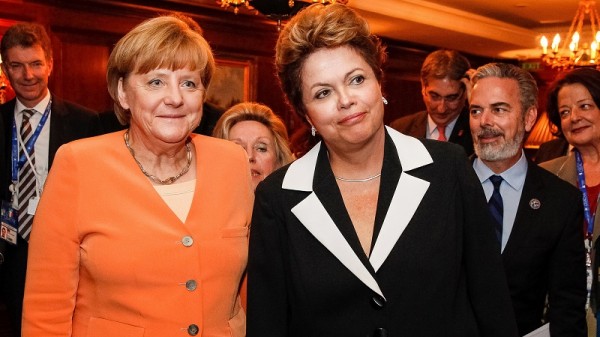 Brazil supports decarbonisation of the global economy by the end of the century, president Dilma Rousseff declared on Thursday.

She backed the G7 stance on a long term goal to phase out fossil fuels during a visit by German chancellor Angela Merkel to Brasilia.

The leaders of the biggest economies in Europe and Latin America committed to a joint stance on climate change ahead of talks to sign off a global deal in Paris this December.

“We agreed on common actions to deal with one of the most important challenges of the 21st Century,” said Rousseff, according to a Reuters report.

Brazil, the world’s fifth largest greenhouse gas emitter after China, the US, EU and India, has yet to submit its contribution to a Paris deal.

All countries are expected to enter strategies to green their economies by 1 October, to underpin an international agreement.

On a visit to the US in June, Rousseff revealed plans for expanding renewable energy and limiting destruction of the country’s vast forests. She stopped short of unveiling an economy-wide goal to cut greenhouse gas emissions.

On her visit, which also addressed trade between the two nations, Merkel announced €550 million (US$616m) of climate finance to Brazil.

That will support its goals to get 28-33% of the country’s energy from renewable sources, not counting hydropower, eliminate illegal deforestation and restore 12 million hectares of forest by 2030.

Jennifer Morgan, climate expert at the World Resources Institute, said the leaders’ shared vision “sends a powerful signal” to the rest of the world.

“It’s telling that two countries with very different economies view a goal of decarbonizing the global economy, in an equitable manner, as desirable and achievable,” said Morgan.

“The world will be watching to see if Brazil’s soon-to-be-released national climate plan lives up to these encouraging principles.”

Campaign group Avaaz also welcomed the “hugely significant” support for reducing global emissions to net zero, although the campaign group argued the date should be brought forward to 2050.

Brazil should peak its emissions by 2030 and speed up efforts to eliminate deforestation, according to campaign director Iain Keith.

“Brazilian support is crucial if the world is going to call time on the age of fossil fuels in Paris,” he said.

“President Rousseff has just shown real leadership in setting 100% clean energy as the most effective way we can prevent the catastrophic consequences of global warming. Now we need to see Brazil spelling out how it precisely intends to do this.”