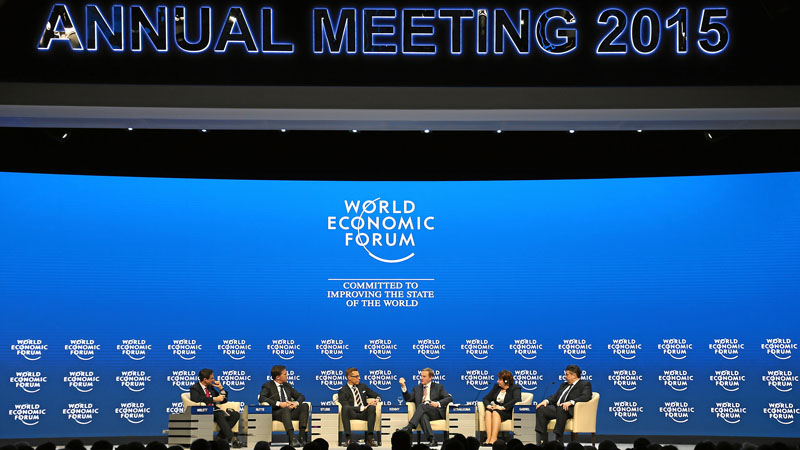 For a week every January, the small Swiss town of Davos is home to the world’s rich and powerful.

An estimated 2,500 head to the World Economic Forum each year, made up of chief executives, government officials, diplomats and a few heads of state.

It’s branded as the Glastonbury of networking festivals, a chance to influence global policymaking, exchange ideas and build contacts.

And it can offer a clue on how seriously big business is taking certain issues. For the past few years the global financial crisis has dominated the halls and corridors.

“In terms of the sense of urgency there’s a lot crowding in on people’s minds,” she says in an interview from Davos.

It can be hard for an issue like climate change – however existential – to break into the “tracks” of debate that determine what is discussed by delegates.

That’s not to say it’s being ignored.

The question is: are WEF attendees taking the issue seriously?

It is an important consideration, given over 190 countries are scheduled to sign off on a UN agreement to curb greenhouse gas emissions in Paris later this year.

“The challenge here is to really have climate understood as a systemic risk across all the different tracks – and I don’t think we’re there yet,” says Kyte.

There are “multiple” conversations about the impact of low oil prices, the need to tax pollution, and she believes most CEOs are aware of the risks posed to supply chains.

But so far these strands are not pulling together in an over-arching debate on the trajectory of the world economy: “Davos has not found a solution to silos,” Kyte says.

@rtcc_edking all of the above but no doubt that a serious effort to focus on climate this year is present, visible and mobilised.

Some panels do brush upon the impacts of a climate deal.

On Wednesday, an oil and energy presentation saw the head of Saudi Aramco admit he had met fellow fossil fuel chiefs for dinner to flesh out their response to a possible Paris deal later this year.

But he steered clear of offering any solutions to the audience, instead urging fellow producers to invest in new technologies to boost oil flows.

It’s a different story in the set of talks devoted to green and low carbon issues.

“The conversation is getting very nitty-gritty about need for better pricing, insurance industry pricing risk correctly, and the serial market failures that climate change is exposing,” says Kyte.

“Economists and financial heavy hitters are having conversations on this – that’s in a climate track which has gone from being just gurus to financial and economic leaders.”

In particular, industry leaders are starting to talk about carbon pricing with more enthusiasm.

Costing carbon is an issue that Kyte and the World Bank have pushed for the past year – and one that gained substantial support from over 1,000 businesses last September at a UN climate summit in New York.

Momentum seems to be growing – albeit slowly – and prices are unlikely to hit the US$220 that Stanford academics suggest is the true social cost of carbon pollution.

This month saw South Korea launch its carbon market, the Canadian state of Ontario release plans for a carbon price and former US Treasury secretary Larry Summers call for a small tax on oil and gas use.

“Business is really focusing on where it needs to show up and what it needs to say to support success [in Paris] this year, certainly on carbon pricing,” says Kyte.

Further announcements are expected on Friday, the designated ‘climate day’ in Davos.

Earlier this week UN climate chief Christiana Figueres told RTCC she will warn delegates of the dangers of investing in fossil fuels that cannot be burnt if the world is to limit global warming, known as the “carbon bubble” theory.

But will this message resound across the whole meeting and infiltrate the minds of the 1,500 bosses of the planet’s top companies?

New ‘green’ leaders appear hard to spot for now. Instead it’s the seasoned veterans Polman, Branson, Al Gore and Lord Stern who are dominating the headlines.

It’s almost impossible to quantify the meeting’s impact. The beauty of Davos is that attendees are under no obligation to negotiate an agreed outcome. Everyone leaves looking good.

What the meeting does offer is a useful insight into how the world is run, which business leaders are pulling the strings, a sense of their priorities and how slow systemic change actually is.

One way of measuring this is by looking at the composition of delegates. They are predominantly from North America or Europe, white, and over 80% are men.

Power – and attitudes to the major challenges facing the planet – are still vested in a small proportion of the world’s population.

In that sense, this gathering is as much a forum for solutions as it is a looking glass on the problems facing society.

It’s a situation that has to change if climate change and other existential risks are going to be taken seriously, says Kyte.

“It’s noticeable they have not made progress in advancing the numbers of women who are here [in Davos]. It’s absurd,” she says.

“If you think you need diversity – this is a significant non-diverse gathering that will not be able to understand risk – based on science, and that’s a big question mark.”