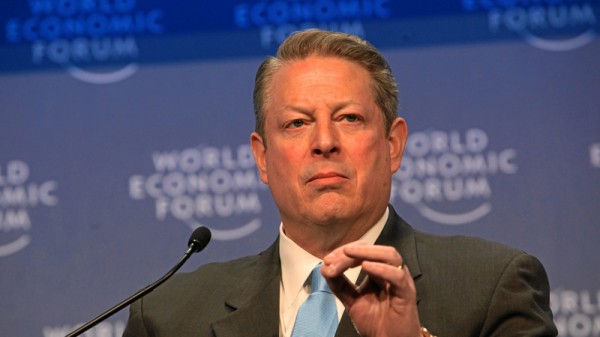 Al Gore warned of climate change denial in the oil sector at a summit of business chiefs on Wednesday.

The former US vice president and climate campaigner flagged up the risks of “unburnable carbon” at the World Economic Forum in Davos.

He became the latest in a long line of leading figures to warn most fossil fuels need to stay in the ground to combat dangerous climate change.

Gore said in a panel discussion: “I think it is just wishful thinking on part of oil company executives to say it’s all going to be burnt. It can’t be.

“Even if there was no government action look at the constraints of Mother Nature, look at coal burning in China – people are choking. It’s going to change.”

He added that oil companies “want to promote a variety of different forms of denial” in a bid to keep their businesses going.

The remarks followed a call by more than 150 investors on BP and Shell to disclose their exposure to climate change risks.

The Church of England, local authority pension funds and charities filed a resolution urging the oil majors to check whether their business plans are compatible with a safe climate.

Specifically, that means exploring the impact of limiting temperature rise to 2C above pre-industrial levels – an internationally agreed goal – on their profitability.

A recent UCL study concluded a third of known oil reserves, along with half of gas and more than 80% of coal, were “unburnable” in the next forty years.

In the past, oil companies have played down the risks, casting doubt on the will or ability of politicians to curb growing demand for their product.

The investors, coordinated by ShareAction and ClientEarth, pressed the firms to reduce their emissions and divert funds into renewable energy.

Catherine Howarth, chief executive of ShareAction, said: “We welcome the leadership shown by this international list of investors in BP and Shell, in a crucial year for climate change decisions and diplomacy.

“Millions of pension savers worldwide will want their pension funds to vote in support, demonstrating true commitment to protecting their members from the risks of climate change. These resolutions put the global investment community to the test on climate change.”