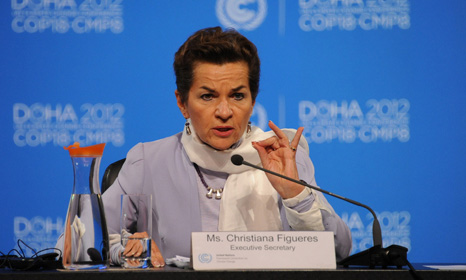 The idea that investors may lose money sunk into fossil fuel projects is no longer just a theory—according to to UN climate chief Christiana Figueres, it is now a reality.

Green groups have warned that huge reserves of oil, gas and coal are overvalued and could lead to a “carbon bubble”. This is because increasingly stringent climate policies will require around half of known fossil fuels to stay in the ground, instead of returning a profit to investors.

Many, including oil giant Exxon Mobil, have shrugged off the threat. But Figueres, who leads the UN’s climate body, said that low oil prices are already affecting the market.

“A lot of the stranded asset conversations we’ve been having for a long time are now coming true,” she told RTCC, speaking in an interview from the World Future Energy Summit in Abu Dhabi.

“Those expensive oil projects — deep sea, Arctic, tar sands — those are actually beginning to be taken off the table because of the low oil prices.”

Norwegian oil major Statoil, for instance, has handed back three exploration licenses on the west coast of Greenland, where the costs of drilling are high. The dramatic drop in oil prices — which have more than halved to $45 per barrel since June 2014 — renders these kinds of projects unviable, said Figueres.

Statoil is not alone. In December, Chevron delayed plans to drill in the Canadian Arctic, citing “economic uncertainty” as oil prices fall. Last week, Shell announced it was abandoning plans for a $6.5 billion petrochemical project with Qatar Petroleum, while the UK-based Premier Oil deferred projects off Norway and in the South Atlantic.

This is only the beginning of the troubles which loom ahead for the fossil fuel industry, warns the Carbon Tracker Initiative, the group which coined the term “carbon bubble”.

The group warns of “systemic risks” to investors as governments take action to curb fossil fuel emissions and accelerate the shift to a low-carbon economy.

“If the 2C target is rigorously applied, then up to 80% of declared reserves owned by the world’s largest listed coal, oil and gas companies and their investors would be subject to impairment as these assets become stranded,” wrote the group in their report Unburnable Carbon.

The 2C target is the internationally agreed limit to global warming, after which the impacts become much more severe. This December, Figueres will lead negotiations in Paris aimed at stimulating the action needed to avoid this threshold.

Figueres said that the threat of stranded assets will be a message that she takes to the world’s leading financiers and heads of state during a trip to the World Economic Forum in Davos this week.

But she doubted that she will have been the only one there who has taken notice of the threat. If her expectations play out, it will be a sign that the carbon bubble notion has moved from the niche to the mainstream.

“When you begin to see very specific examples of a concept that was previously only a concept, I do think it’s going to be taken much more seriously on the part of investors,” she said, adding that she expected an “exciting conversation” on the impact that falling oil prices will have on the potential for investments in renewables.

The stability offered by the clean tech industry should be a comfort to investors in the wake of oil’s evident volatility, she adds.

Nonetheless, the immediate threat of stranded assets need not spell the end of the oil and gas industry, which can be part of the solution if they want to be, said Figures, pointing in particular to German utility E.ON which announced in November that it would split the company to focus on renewables.

She predicted: “That kind of a division is probably one that will be looked at by several other companies because they can see the demand — not just the supply — but the demand for fossil fuels is flattening out, and there is every day more demand for renewable energy because of the many benefits that it brings.”