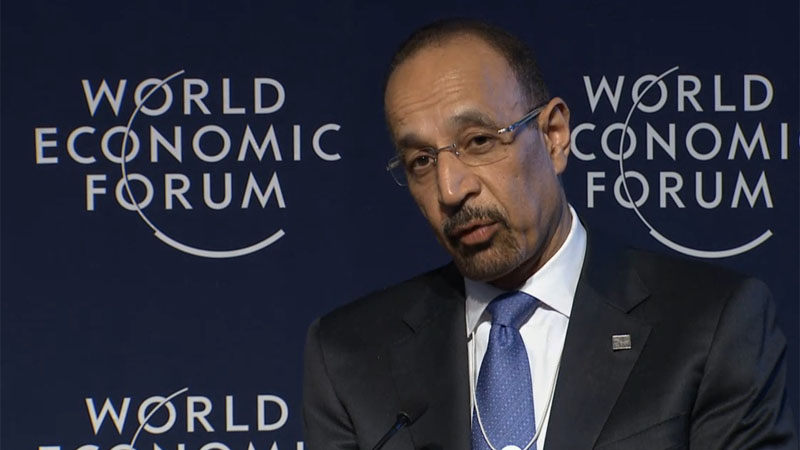 Oil and gas industry leaders met for a private dinner on Tuesday evening at the World Economic Forum to discuss how they can rise to the challenge posed by climate change.

Saudi Aramco chief Khalid Falih revealed that senior executives had come together in Davos to chart a path forward for fossil fuel producers amid a backdrop of plunging oil prices.

Falih, whose company owns the world’s largest proven crude oil reserves, acknowledged a planned global emissions cutting deal, set to be signed at in December 2015, was on the mind of major producers.

“We need to respond to climate change challenges and the climate regime we will face after the COP [UN climate talks],” he said at a WEF panel on Wednesday, focused on the “geo-economics of energy”.

COP stands for Conference of the Parties, the UN forum where over 190 countries will gather to negotiate the terms of any climate pact.

Some governments want the deal to set a 2050 date for a target of zero net greenhouse gas emissions, which would either require vast investment in carbon capture facilities or an end to burning oil, gas and coal.

Falih appeared to dismiss this proposal and suggested the industry would need to develop “50 to 60 billion barrels of oil capacity” in the coming decades.

He said “every” supplier would need to extend their capacity and confirmed reports that Saudi Aramco planned to invest in unconventional gas exploration in the Middle East.

But he admitted there would be less appetite for financially risky fossil fuel projects, which he said could cause longer term problems.

“Investment flows will be much more careful in the future. People will be careful before committing large sums of money in mega projects to the oil and gas industry,” he said.

We lose 5-6% of oil production unless we invest. Investment shouldn’t be scared away – Khalid Falih #futureinvest http://t.co/chhRWYvemc

“In the long term it’s a worry to my colleagues because we know we have to invest and we have to invest big to meet rising demand… we’re losing 5-6% amount of production unless we invest large amounts of capital.”

Upstream oil and gas investments could fall by 15% in the coming year, around US$ 100 billion, according to International Energy Agency chief economist Fatih Birol.

“We will not enter into projects which have huge risks,” he said.

Russia has lost around $2 billion in revenues for every dollar knocked off the oil price, and growth in 2015 could slump by as much as 0.7%, said the World Bank.