US has officially left the Paris Agreement, amid election to determine climate future

The race for the White House could take days or weeks to settle, with major implications for the prospects of tackling the climate crisis 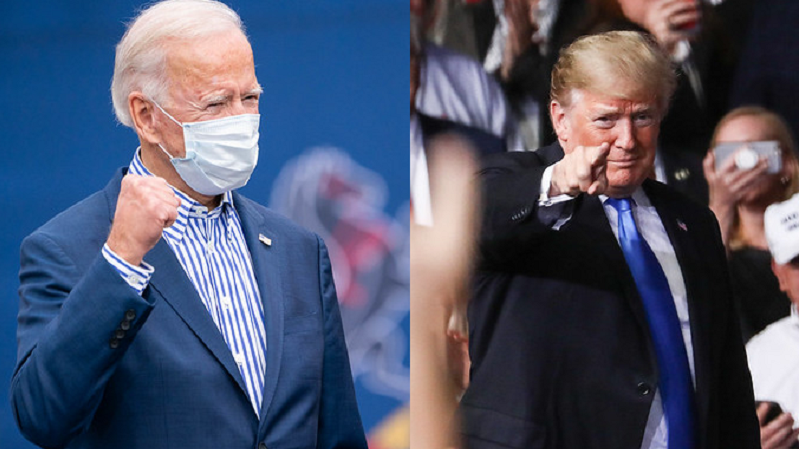 By Isabelle Gerretsen and Megan Darby

The choice going into the US presidential election could not have been more stark: four more years of climate denial and inaction or a $2 trillion green revolution.

As results came in from across the country on Wednesday, it became clear that it would be a close race. With record numbers of votes cast by post due to the coronavirus pandemic, some counts are taking longer than usual.

Democrat Joe Biden assured his supporters around 12:30am Eastern Time “we are on track to win”, even as the path to victory looked narrower than pollsters predicted. Republican incumbent Donald Trump then baselessly accused his opponent of trying to “steal” the election, setting the scene for an ugly fight that could drag on for days or weeks.

The fight will centre on postal ballots received after election day, which are expected to favour the Democrats — and can be counted under some states’ regulations. Trump said: “We will be going to the US Supreme Court. We want all voting to stop. We don’t want them to find any new ballots at 4 o’clock in the morning and add them to the list.”

Grassroots activists promised to defend those ballots. “We are holding the line and demanding that officials count every single vote,” said Tamara Toles O’Laughlin, North America director at campaign network 350.org, in a statement. “No matter the results, we are here for the fight ahead… It ain’t over til it’s over.”

It comes as the US officially leaves the Paris Agreement, three years after Donald Trump first announced his intention to do so. The country keeps a seat at UN climate talks, whatever the outcome of the election, but surrenders the right to take decisions on the implementation of the Paris deal.

Trump’s exit did not, as some feared, lead to a wave of countries quitting the pact. China, Japan and South Korea signalled renewed commitment to climate action in the last two months by declaring net zero emissions targets. The EU is expected in December to increase its 2030 emissions reduction target to at least 55% from 1990 levels.

“The US has effectively been a no-show under this administration, and the rest of the world has responded accordingly: by moving on,” Kelley Kizzier, former EU climate negotiator and associate vice president for climate at EDF action, the advocacy partner for the Environmental Defense Fund, told Climate Home News.

“We’re all in agreement that a Biden scenario would be smoother, but even under a Trump scenario climate action will still proceed,” Peter Betts, former EU and UK lead climate negotiator and an associate fellow at Chatham House, said in a pre-election media briefing. “Nobody will follow Trump out of Paris [and] the EU and China will go ahead [with their climate plans]. Diplomatically it is not the end of the line,” he said.

Fact check: Where are US emissions after four years of President Trump?

But the US is responsible for 15% of global carbon dioxide emissions and a quarter of the world’s economy: its participation is critical to meet the Paris Agreement goals.

If we give Donald Trump another four years in the White House, our planet will never recover.

If Biden secures the White House, he is promising to rejoin the Paris Agreement on his first day in office and to “fully integrate climate change” into both domestic and international security strategies.

In the most ambitious climate platform ever presented by a presidential candidate, Biden is pitching for net zero emissions by 2050 and 100% clean electricity by 2035, backed by a $2 trillion green investment drive. His proposals include building 1.5 million energy efficient homes and improving the energy efficiency of 4 million buildings.

He has yet to determine an emissions reduction target for 2030, which is key to rejoining the Paris Agreement. The level of ambition would depend on what the Democrats could get through Congress.

According to Climate Action Tracker, the US should reduce its emissions by at least 52% by 2030 to do its fair share towards meeting the Paris Agreement goals. The America’s Pledge initiative projects a 49% cut is achievable with robust federal policies, or up to 37% if a coalition of willing states and cities take action without federal backing.

“States, cities, and companies all over America are taking action, and have committed themselves to doing their part to meet the goals of the Paris Agreement. They are showing that while Donald Trump can pull the US out of the Paris Agreement, he doesn’t speak for the majority of Americans who demand climate action,” said Kizzier.

In 2019, 62% of US electricity generation came from natural gas, coal, and petroleum, according to data from the Energy Information Administration. This will need to be replaced by nuclear and renewables if Biden is to make the grid “100% clean” by 2035.

The transition to clean energy is already well under way in the US, experts say. Both Democratic and Republican states are embracing renewable technologies and investing in wind and solar power.

“Coal is on its way out at rapid pace,” said Rachel Kyte, dean of the Fletcher School at Tufts University and former adviser to the UN secretary general on sustainable energy. Despite President Trump’s efforts to revive the coal industry, coal use for primary energy production fell by 3%, while renewables rose 11%, according to data from the Energy Information Administration.

The US’ wind power capacity increased from 82 GW in 2016 to 106 GW in 2019, making the country the second-largest wind market after China.

Texas, the heartland of US oil and gas, has the largest number of solar projects in the pipeline of any US state, with 25,738 MW of new capacity planned by the end of 2024.

Trump’s watchword of the last four years has been “energy dominance”, with a focus on defending jobs in coal, oil and gas sectors.

In the event of Trump winning enough swing states to stay in the White House, his lack of clean energy or carbon-cutting policies could put the US at a competitive disadvantage, Kyte said. The EU is working to introduce a levy on carbon-intensive imports at the border.

“If everybody else is putting a border tax adjustment on carbon, if everybody else is treating carbon as a bad, how do you in a global economy still operate with success if you are not doing anything to diminish your energy intensification?” Kyte asked.